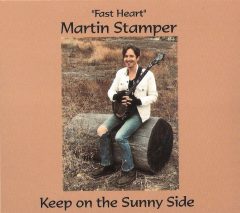 Fast Heart Mart (Martin Stamper) is a local banjo and guitar player-vocalist who has been part of the local acoustic scene for two decades. He has been busy with nine recorded releases, and his latest is Keep on the Sunny Side.

The 13 tracks represent what Mart terms a collection of his most requested songs. A mix of originals and covers, which also mixes live and studio recordings, the sound overall is relaxed, unpolished, and listener-friendly bluegrass, often delivered with tongue firmly in cheek by Mart’s vocals. The crew playing with him includes Stamper on vocals, banjo, and guitar; Tom Warner on backing vocals and electric upright bass; Joe Schwab on brushed snare; “Sita Rose” Anderson on backing vocals; Jamie Shadowlight on fiddle; and Saki Chan on accordion.

Things get started with the title song, which is 120 years old and popularized by the Carter Family. The plinking and frailing of Mart’s banjo take turns with his voice in laying down verses of a song that brings together country and Gospel influences. As elsewhere on the disc, the musicians sound like they are having fun, and the backing vocals bring in tasty harmonies on the chorus. Mart’s original “Hearts and Dreams” follows with some real sizzle in the picking on this fast-paced highlight.

The covers include some enjoyable choices, starting with “Wish You Were Here,” the well-known Pink Floyd favorite. Bouncing bassline and brushed drum beats hammer home the revved-up reading, as Mart stays pretty close to the melody of the original—as if it were injected with bluegrass octane. Harp ushers in the quirky “I’m an Alien and I Want to Go Home,” which finds Mart playing guitar while laying down a lyrical tale about being in the Garden of Eden, hearing God on an intercom, and eventually encountering a flying saucer, “So long, planet Earth/ I didn’t understand you anyway.” On “Hippie Valentine” Anderson and Mart alternate on vocals as the song tells of chocolates made with corn syrup, and greeting cards that mean turning trees into paper as Mart romances a new counterculture girl on Valentine’s day.

Another winning cover is heard on “Norwegian Wood,” given a tasty arrangement with Shadowlight’s fiddle lines weaving in and out of Mart’s banjo licks—proof again that great songs will always sound great no matter the spin. The only misfire on the album is “Haunting,” which is slowed down—maybe too slow—and plays too close to a dirge, as Mart, again on guitar, sings about still having his faith despite a breakup. Mart and crew get right back in the groove, with a hoedown reading of “Crazy Train,” sure to be a favorite with those who count Ozzie Osbourne as a guilty pleasure. Late in the program, the tendency toward humorous originals includes the goofy “Crappy Holidays” and “Carbird,” about hitting a bird with a car and teaching it to fly. The last tune is one of the best, a nicely harmonized, rave-up on the standard “I’ll Fly Away,” capturing some of the edge that made O Brother Where Art Thou? such a favorite.