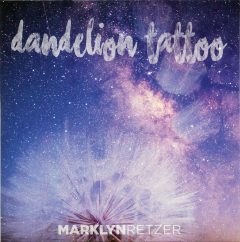 Dandelion Tattoo is the latest from Marklyn Retzer. The five-song EP follows two full-length efforts, including 2014’s Presence, by the beach rocker, a teacher by day whose music typically celebrates good times, surfing, and love without drifting too far into the lanes mapped out by Jack Johnson and Jason Mraz. Produced by Ben Moore, it is lightweight rock with acoustic guitar punctuated by prominent Hammond organ.

Some of the songs, like the opener, “She Calls Me Love,” sound like they might have started as beach reggae, smoothed out by Matt Lynott’s drums. The title tune is more of the same, with good backing vocal harmonies beefing up the sound and Retzer’s understated electric guitar fills fitting the arrangement well while he sings about the new ornamentation, which reminds him of his girlfriend, but “I knew that this one would stay on my arm.”

“Shooting Stars” is a love song with metaphysical lyrics, riding Hammond swells like breaking waves; it does a good job of buildup as Retzer sings about being “enthralled in this absorbing cosmic kiss” and islands in the sky–it’s loaded with metaphors, but holds together. The uplifting messages keep coming with “Fly Free,” about transcending this life to go higher-striving, going beyond, living free. Not a bad idea, though on the heels of other tunes like “Stars” the definite trend here is toward a cosmic hippie utopia trip. Or maybe just good time, beach songs to play by a campfire.

JEFFREY JOE: Don’t Get to Know Me