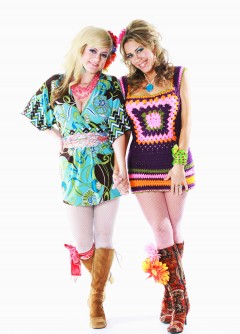 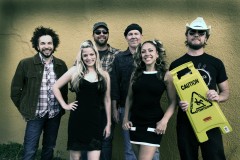 Austin, Texas has dubbed itself the “Live Music Capital of the World,” and in light of the numerous festivals it hosts (Austin City Limits, South by Southwest (or SXSW), Old Settlers, Kerrville Folk Festival, and many others), and the plethora of live music venues throughout the city, who can disagree? Not Barbara Nesbitt, a diminutive, blond-haired singer-songwriter who moved to Austin from San Diego in 2010 in order to find a place more congenial to her musical roots. She was looking for “someplace where audiences took music seriously,” and where a varied community of musicians lived to network with. She found both. Austin draws aspiring musicians much like Los Angeles attracts would-be actors and actresses, and like New York beckons to hopeful dancers and singers. Many of these seekers meet disappointment, but Barbara’s tale has a happier ending.

Barbara’s hard scrabble musical odyssey began in her native Stone Mountain, Georgia. Although separated at an early age from her mother, who was a band director, Barbara pursued an interest in music in order to maintain a spiritual connection with her absent mom. After finding a stash of old 45s hidden in the basement of her father’s house, she snuck them up to her room at night, and listened to them. Sam Cooke, Elvis, the Righteous Brothers, and Jerry Lee Lewis enthralled her with their rhythm and blues. Night after night, she sang along in the solitude of her room, imagining that the darkness beyond her window was the audience. Performing on stage remained a fantasy as Barbara and her father moved around the southeast United States.

At the age of 15, while living in Florida, Barbara ran away from home and found herself in the Tidewater area of Virginia, hanging out with a group of jam-oriented musicians who played cover songs. She met an influential figure in her life, Bernie Lee, who literally put a guitar in her hand for the first time and encouraged her to step behind the microphone. She had never performed onstage before, but that is where she learned to sing. From the beginning, her vocal talent was plainly evident. Barbara was a natural crowd pleaser, and learned to entertain audiences doing cover gigs in a succession of bands including Rare Daze, Cradle, and the Perpetrators, a duo with Lee. (Barbara dedicated her first CD to Lee, whom she credits as “the reason music became my life.”) Barbara thrived on stage, finding the support and approval she lacked at home. While living in Virginia, she began writing her own songs and was recognized with nominations for female songwriter of the year in addition to winning acoustic performer of the year by Rock Flash magazine. Yet Barbara’s restless nature — and ambition — urged her to seek bigger opportunities elsewhere.

In 2005, she moved to San Diego and quickly fell in love with the city and its people. As she had in Virginia, Barbara initially performed covers, signing up for open mikes and other showcases. Simultaneously, Barbara met another influential figure in her musical career, Cathryn Beeks, maven of Listen Local San Diego and tireless supporter of original local music. Beeks introduced Barbara to countless local musicians and songwriters, including Matt Silvia, who encouraged Barbara to focus her set on original songs instead of covers. Barbara found that her creative juices were stimulated by the new environment in San Diego and the musicians she was surrounded with in Beeks’ crowd; she was soon writing more original songs than she ever had. “I wrote more songs in the next few months than I had written in years,” she recalls.

Not long after arriving in San Diego, Barbara entered and won the San Diego Music Scene Cream of the Crop singer/songwriter competition and was nominated for best female singer for the inaugural H.A.T. (Honoring Acoustic Talent) Award. Among the local musicians introduced to Barbara by Beeks were Mike Spurgat, Bill Coomes, and Marcia Claire, who eventually became Barbara’s band. Barbara also met the versatile (and legendary) musician and producer Jeff Berkley, who would produce and play on her debut album, A Million Stories (2007) (and each of her subsequent solo albums). Inspired by her new surroundings in San Diego and the tumultuous journey that brought her there, Barbara wrote the words and music for her first recording, which featured her band (named above) with special guests Dennis Caplinger, Freebo, Ben Moore, and John McBride. A Million Stories, dense with reflective lyrics and sinuous melodies, was well-received, including nominations for a San Diego Music Award and a H.A.T. Award. A Million Stories was a catharsis for Barbara, almost a form of musical therapy, to celebrate her passage through past sorrows and hardships.

While recording A Million Stories, in Berkley’s Miracle Recording Studio in San Diego, Nesbitt ran into another influential figure in her musical career, Tim Flannery. Flannery was looking for another voice in his band, the Lunatic Fringe. After auditioning Barbara, the popular and indefatigable Flannery decided she was a good fit and hired her on the spot. Barbara has been playing and recording with him ever since (including on Flannery’s highly praised album The Restless Kind).

Despite her love for San Diego, in 2010, Barbara felt the need to move someplace with a bigger music scene. She considered Nashville and New York City, but after visiting Austin, Texas, she decided she felt most comfortable there. Ever the intrepid pilgrim, the ever-confident Barbara packed up and headed to Austin, not knowing a soul in her new home. Ironically, even though she relocated to Austin for the local music scene, she spent a good portion of 2010 and 2011 touring overseas, in Hong Kong and Scotland, performing solo and with pickup bands. Eventually, she reminded herself that the reason she moved to Austin was to immerse herself in the local musical community. So Barbara put down her roots and began networking in earnest with Austin musicians. (She also continued to work with her band, and in 2011 released a second CD, The Bees, which was reviewed in the March 2011 issue of the San Diego Troubadour.)

Among the connections Barbara made in Austin was meeting Teal Collins, lead vocalist with the hugely popular rock/blues/ country group the Mother Truckers, which formed in San Francisco in 2002 and at the suggestion of Asleep at the Wheel’s Ray Benson (who also hails from the Bay Area) relocated to Austin in 2005 (ironically, the same time Barbara arrived in San Diego). The Mother Truckers became one of the most popular bands in Austin, enjoying a coveted residency at the fabled Continental Club on South Congress. Collins was consistently recognized as one of Austin’s best female singers, and her husband, Josh Zee, who played lead guitar in the Mother Truckers, was regarded as a premier shredder and had been featured in Guitar Player magazine. After a decade-long run, which included the release of several critically-acclaimed CDs, in 2012, the Mother Truckers went on a hiatus. Zee gravitated to a group called the South Austin Moonlighters and Collins was pursuing other options.

At that fateful moment, Barbara and Collins decided to try singing together, and they instantly realized that they had chemistry. Major chemistry. They knew they had to perform together and the Whiskey Sisters were born. They began rehearsing, organized a band (using Zee and the rhythm section of the South Austin Moonlighters, and hired Michael Davids on keys — see CD review in this issue for more details), and played their first gig at the 2012 SXSW. They were an instant sensation, winning Best New Band at the 2013 Austin Music Awards (and placing in the top 10 in many other categories). Doors opened all over town. The Whiskey Sisters were invited to play at the Continental Club and enthusiastic crowds led to a running happy hour “residency” on Thursday nights, a cherished gig. They have been featured at local FM station KGSR’s popular “Blues on the Green” concerts in Zilker Park and performed at many other famous Austin venues, such as the Saxon Pub, Antone’s, Gruene Hall, and Luckenbach. In between out-of-state touring dates (including the Ride Festival in Telluride, Colorado; High Sierra in northern California; the Crystal Bay Casino in Lake Tahoe; and the Bottle Rock Festival in Napa Valley), the Whiskey Sisters managed to record their debut CD (reviewed in this issue). Not bad for a band that has only been performing for 18 months!

By all indications, the Whiskey Sisters could be Barbara’s ticket to national recognition and commercial success. But it is not her only gig. She continues to play with her own band and, in fact, has a new album coming out this month, called Almost Home. Barbara will be appearing in San Diego at a sold out show on August 10 at the Keller’s House Concert in Cardiff by the Sea to promote the release of the CD.

What does it feel like to be on the cusp on stardom after seeking it for so long? Barbara is characteristically upbeat: “Music is a labor of love. I don’t feel like I have been seeking stardom as much as just enjoying the ride. I never expected fame and fortune, so I haven’t been disappointed by just doing what I love. But if I do get a big ol’ bag of dough out of it and some recognition, who am I to argue?” This much is certain — Barbara has many fans in San Diego, and they all are rooting “You go, girl!” San Diego’s loss is definitely Austin’s gain.

SUMMERGRASS Is Fun for Everyone!!

Earl Thomas Raises the Roof for the Blues Hall of Fame