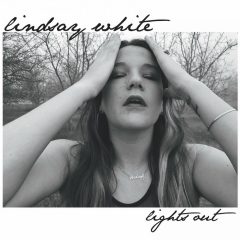 Lindsay White (check out the feature in last month’s Troubadour) is no stranger to local roots music fans, or readers of this magazine. She has been racking up recognition as a songwriter for years and, as a member of the Lovebirds with Veronica May from 2010 to 2015, has produced three well-received CDs and toured nationally. She released a solo disc in 2010, and is back with a new album, Lights Out.

White has experienced losses during the past few years (a grandfather in 2015 and her mother early this year to cancer) as well as personal trials. She is one of those songwriters who can express her emotions wonderfully, and many of the new songs are like a catharsis, often a dark soul–deep personal portraits that hold very little back. Produced by Alexander Dausch, who plays the instruments aside from White’s guitar and two appearances by Jamie Shadowlight on violin, the straightforward and clean arrangements help White’s floating voice and superb lyrics sink in. These are stories full of lessons and metaphors to be heard.

The first single opens, “Surrogate,” a touching tribute from White to a childhood protector, her sister Haley. “I will praise you, ‘cause you raised me/ My grace traced to you.” An introspective, slower tune, “My Beast,” features electric guitar flourishes as she expresses her doubts about how to reign in her own tendency to attack–whether to stand her ground, hide in a hole or run; the bottom line is to survive. Minor chords and somber ideas make up “The Lighthouse,” about a fading love, a beacon that has faded to a flicker. “Deep Dark Down” is a ballad, clearly about the loss of her mother, that conveys the anguish and flood of emotions after personal loss; “I might as well be a shovel, the way I bury hurt/ Dig a hole where the pain goes, and I cover it with dirt.”

More introspection is heard on “Junkyard Dog” as White sees herself in a no-win situation–on a leash, given just enough to survive, all bark and no bite. It is a brooding, dark series of metaphors, a bleak glimpse into depression. “Rubber Band Gun” is also borne out of loss, about her grandfather. This highlight describes memories of shared experiences: “Thirty-two times we circled the sun/ Till he shot off the Earth like a rubber band gun.” The song has a catchy hook and chorus and a very touching message, as White describes him as the “man of my dreams.” A year ago, White married her wife, and “Not a Boy” is a song about the celebration, missed by the bride’s parents, who were not in attendance. The message is clear that love was in the air and that missing her smile, joy, and vow was their loss. The disc wraps with the title tune, a lovely folk song using boxing metaphors about her mother, who “boxed her way in and boxed her way out.”