February 2023
Vol. 22, No. 5
Like a Rolling Stone: Bob Dylan at the Crossroads by Ted BurkeMay 2020
Back with a Bang! Java Joe's Reunion at San Diego Folk Heritage by J.T. MoringMay 2020
Book Review: The Philosophy of Modern Song by Bob Dylan by Ted BurkeMay 2020
Rick Nash: Bass Man in Demand by Wayne RikerMay 2020
Mod Revivalists the Trebels to Reunite for 40th Anniversary Show by Jim TrageserMay 2020
If Music Be the Food of Love, Play On: Dually Noted Pairs Fine Food and Fine Music by Paul HomiczMay 2020
Harold in the Land of Jazz by Bart MendozaMay 2020
Sephardic Dance and Music by Yale StromMay 2020
Loretta Lynn: A Special Tribute to the Queen of Honky Tonk by Terry Paul RolandMay 2020
Ben Grace Gilmore: It's All About Building Community by Sandé LollisMay 2020
Advertisements 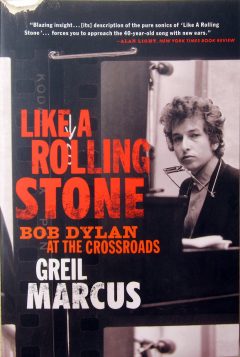 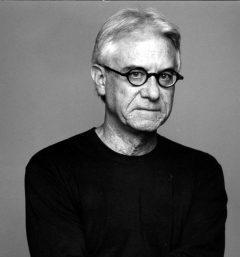 Author Greil Marcus made a name as rock critic by insisting that the tide of history is directly mirrored by the pop music of the period. This can make for exhilarating reading, because Marcus is, if nothing else, an elegant stylist given to lyric evocation. But it is that same elegance that disguises the fact that he comes across a middling Hegelian; the author, amid the declarations about Dylan, the Stones, the Band, and their importance to the spontaneous mass revolts of the sixties, never solidifies his points. He has argued , with occasional lucidity, that the intuitive metaphors of the artist/poet/musician diagnose the ills of the culture better than any bus full of sociologists or philosophers, and has intimated further that history is a progression toward a greater day. Marcus suggests through his more ponderous tomes—Lipstick Traces, Invisible Republic, The Dustbin of History—that the arts in general, and rock ‘n’ roll in particular, can direct, in ways of getting to the brighter day, the next stage of our collective being.

Like a Rolling Stone: Bob Dylan at the Crossroads is an attempt to assemble a history of the pivotal song, bringing together well-worn facts about dates, names, and incidents that have been amply discussed in many previous studies of Dylan’s life and work. The idea buzzing underneath Marcus’ account of the people, places, and things that led up the creation of “Like a Rolling Stone,” the six-minute transitional masterpiece that made rock and pop musicians do a hard left turn, was that Dylan was the hero in a history and was not aware that he would be a hero. Known and more obscure facts about Dylan’s life and writing are presented breezily. Brought to us are short, sharp glimpses of how Dylan moved from being an imitator of Woody Guthrie and backwoods balladeers to a hero of the civil rights movement. He was fascinated with French Symbolist poets Rimbaud and Verlaine and the Beats (especially the barbed-wire prose of William Burroughs).

The diffusely presented elements eventually lead to Dylan’s controversial decision to abandon folk music and to “go electric.” It’s conceptually intriguing for Marcus to focus on the titular song and the entire album it was drawn from, 1965’s Highway 61 Revisited. The incidents, the details, and the exchanges—real and imagined—of who Dylan was working and socializing with at the time of the recording of “Like a Rolling Stone” are fascinating in themselves, but the elliptical style is frustrating as one finishes one chapter and starts another : you begin to wonder when the data begins to cohere into an argument for what it all means. Marcus prefers a gestalt approach, to have his topic appreciated from the many obscure incidents instead of having everything presented in complex theory. The reader is likely supposed to understand what he’s getting at without the professor’s hand directing him back to the chalk board diagram. An admirable trait in more skillful writers, but Marcus is often gets lost in the smallest implications of any one piece of evidence. The lack of even the slightest thesis statement, the failure to follow through on any intriguing idea that arises from his research is maddening.

Lucky for the reader Marcus is an engaging prose writer, and one can forgive to a degree for not being clearer with what he was getting at. His preferred method seems to be inference rather than careful argument; there is something in his tone that seems to be inspired by the early poems of Eliot and William Carlos Williams. Like them, he seems content to let the “sense-making” to the reader. I suppose everyone knows a character like Marcus, a smart person who makes smart declarations about large, expansive topics but lacks the skills or willingness to make the formal argument.

Marcus, though, isn’t the one to draw us the map. But what has been aggravating with Marcus since he left the employ of Rolling Stone and began writing full-length books and essays for cultural journals is that he chokes when there’s a point to be made—he defers, he sidesteps, he distracts, and he rather gracelessly changes the subject. Again, this can be enthralling, especially in a book like his massive Lipstick Traces the Secret History of the 20th Century where he assumes some of Guy DeBord’s assertions in Society of the Spectacle and situates rock ‘n’ roll musicians in a counter-tradition of groups that spontaneously develop in resistance to a society’s centralized ossification and mounts an attack, through art, on the perceptual filters that blind the masses to their latent genius.

He never quite comes to the part where he satisfyingly resolves all the mounting, swelling, grandly played generalizations that link Elvis, the Sex Pistols, and Cabaret Voltaire as sources of insight geared to undermine an oppressive regime, but the reader has fun along the way. Marcus wants to be a combination of Marcuse and Harold Bloom, and he rarely accomplishes anything, the singular criticism either of them produced in their respective disciplines, political philosophy, and literary criticism, but he does hit the mark often enough to make him a thinker worth coming back to.

Marcus has written so much about Dylan, or has absorbed so much material about him, that he can produce a reed-thin critique on one song and pretend that it is much, much more than what it really is. The problem is a lack of thesis, a conceit Marcus at least pretends to have with his prior volumes; he depends entirely on third-hand anecdotes, half-recollected memories, and a flurry of details gleaned from any one of the several hundred books about Dylan published over the last 30 years. This amounts to little more than what you’d have if you transcribed a recording of the singer’s more intense fans speaking wildly, broadly, intensely amongst themselves, by passing coherence for Sturm and Drang. For the rest of us with a saner appreciation of Dylan’s importance, Like a Rolling Stone is a messily assembled jumble of notes, press clippings, and over-told stories. Marcus, obviously enough, attempts an impressionistic take on the song, but the smell of rehash doesn’t recede, ever.