October 2022
Vol. 21, No. 13
A Love Letter to Blonde Bruce (1953-2020) by Eric LiebermanMay, 2020
Hemisphere: Positively Energized and Ready to Rock by Laura PrebleMay, 2020
Albert Cummings Is Good with his Hands by T.E. MattoxMay, 2020
Book Review: Mandolin Man, the Life of Roland White by John HighkinMay, 2020
Farm Truck: Coming to a Venue Near You by Wayne RikerMay, 2020
Songbirds Take Flight by Charlene PulsonettiMay, 2020
Performers and Artists Contribute to the Audubon Society’s Birdsong Project by Paul HomiczMay, 2020
Finding the Balance Between Science and Music: An Interview with Dr. Hima Joshi by Catherine BarnesMay, 2020
Jazz 88's Joe Kocherhans Bids Farewell to a Long and Illustrious Career by Wayne RikerMay, 2020
The Lady Doctors Will See You Now by Laura PrebleMay, 2020
Advertisements 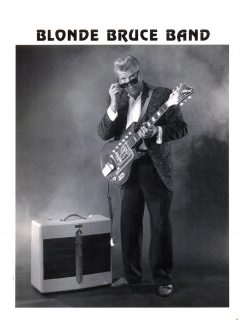 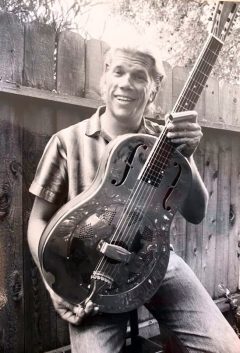 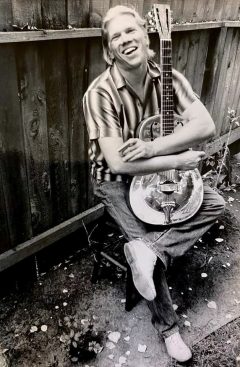 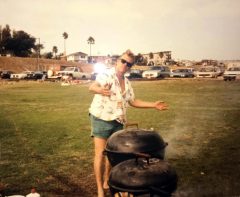 “Blonde” Bruce Thorpe was once a living legend in San Diego, and today he passed on to perhaps live another larger-than-life existence in some other far away universe.

I first met Bruce sometime around 1982 or’83, shortly after he moved from Phoenix to San Diego. My first recollection of ever seeing him, was sitting on a chair in front of his little house off of North Park Way, long blond hair—like Gregg Allman’s—unbuttoned vintage Hawaiian shirt, and playing a vintage National Dobro. If my memory serves me right, he was having a yard sale, selling mostly vintage clothes, furniture, and accoutrements, which he did throughout the eighties and nineties.

When I was in the King Biscuit Blues Band in the early to mid-eighties, Bruce would regularly show up at our weekly Mandolin Wind gig in one of his early seventies’ Cadillacs, which he seemed to drive into the ground and then buy another, with a trunk full of vintage clothes that he would entice me and the other Biscuit boys into buying. He even knew what each of us specifically liked (bowling shirts for Johnny Viau, and Magic Sam/Otis Rush/Buddy Guy Banlons for me), and he’d have them arranged as such in his trunk! Bruce also knew that I loved vintage shark skin suits, and one day he called me at my day job, telling me he had the killer-diller shark skin suit that was meant for me, and he was selling it for $150, but he’d let me have it for $75 if I could get over to his house right away. So, I dropped everything and drove over to Bruce’s, and that suit was just as beautiful as he described it to be over the phone: green with shimmering fluorescent shades of pink and purple, in mint condition. However, there was one slight problem; the sleeves only came down halfway between my elbow and wrists, and you could have fit at least two of me in the pants!

Aside from Bruce’s vintage clothing business, he was a fine guitar player and a low-down blues singer, who had one of the most successful blues bands in San Diego throughout the eighties and nineties. He was probably playing 25 nights a month back then and was one of the premier acts featured at Winston’s in Ocean Beach, Patrick’s II in the Gaslamp, and Jose Murphy’s in Pacific Beach, where he had a residency gig every Sunday afternoon for something like five years or more.

In 1989, I had the Rhumboogies, but when Hook Harrera left Bruce’s band to move to Texas, Bruce asked me if I wanted to play with him when I could, even though I was a guitar player and Hook played harp. I took Bruce up on this offer, and will always be grateful for how generous he was to me as a second guitar player in his band. At that time Bruce also had Mike Judge (of Beavis and Butthead/King of the Hill fame) playing bass in his band, so you might say he was the first to discover Mike Judge, long before MTV!

Here’s a particularly funny story: one time I played with Bruce on a Friday-Saturday night gig that he had at some Italian restaurant in Hollywood, so we stayed up there on that Friday night. Around 2 am, after the Friday night gig, Bruce and I were hungry so we went to the Denny’s on Sunset Blvd., and the place was packed with cross dressers, hookers, and all the rest of Hollywood’s most bizarre characters. It was like a scene right outa Tom Waits’ Nighthawks at the Diner, which we were both big fans of, but yet, we couldn’t hang! It was too much for us, and we had to get outa there as fast as we could. In San Diego, we thought we were the coolest, hippest bluesmen on the planet and that nothing could ever be too much for us. But that night at the Hollywood Denny’s we felt like little, nerdy grammar school science teachers! All of a sudden our vintage shark skin suits felt like Brooks Brothers suits, and our slicked back pompadours felt like crew cuts! We ended up going to a nearby Safeway or Vons, and bought a few bags of chips or something, trying hard to cope with the reality that maybe we weren’t really as hip as we thought!

Last but not least, Bruce was a Barbecue King and made the best barbecue sauce, with fresh plums, that I’ve ever had to this day! For a while, he was even doing his barbecue thing at Jose Murphy’s on the nights he wasn’t playing, and he gave (my wife) Alicia and me a five-gallon jar of his homemade barbecue sauce for a wedding gift, which was probably the most original gift we received!

In closing, back in the day Bruce would sometimes drink a little too much at his gigs, and if there was some asshole or heckler in the audience, he might lose patience quicker than normal, and respond in kind. At times, one of these individuals might complain to me about how Bruce treated them, and my response was always the same, “If Bruce was your friend, you could never hope for one better or more loyal, and that if I was ever stranded out in the desert, in the middle of the night, I know Bruce would come rescue me before just about anyone else I knew!”

I love you, my brother, and will forever cherish the memories of how good you always were to me and of all the crazy times we’ve shared. Sending mine and Alicia’s love, and most sincere, heartfelt condolences to Shannon, too. She was truly the light and the love of Bruce’s life.

Like a Rolling Stone: Bob Dylan at the Crossroads

How Did I Get Here: My Journey into the World of Concert Photography