January 2023
Vol. 22, No. 4
Kiss Open Mics Goodbye by T.L. LewisFebruary 2019
Back with a Bang! Java Joe's Reunion at San Diego Folk Heritage by J.T. MoringFebruary 2019
Book Review: The Philosophy of Modern Song by Bob Dylan by Ted BurkeFebruary 2019
Rick Nash: Bass Man in Demand by Wayne RikerFebruary 2019
Mod Revivalists the Trebels to Reunite for 40th Anniversary Show by Jim TrageserFebruary 2019
If Music Be the Food of Love, Play On: Dually Noted Pairs Fine Food and Fine Music by Paul HomiczFebruary 2019
Harold in the Land of Jazz by Bart MendozaFebruary 2019
Sephardic Dance and Music by Yale StromFebruary 2019
Loretta Lynn: A Special Tribute to the Queen of Honky Tonk by Terry Paul RolandFebruary 2019
Ben Grace Gilmore: It's All About Building Community by Sandé LollisFebruary 2019
Advertisements 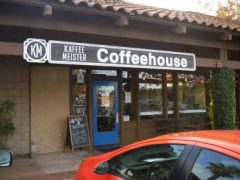 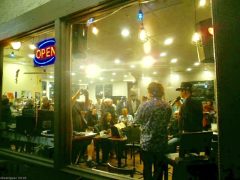 For close to six years the independently run Wood ‘n’ Lips Open Mic has enjoyed the hospitality of Mike and Leslie Emmons at their Santee Kaffee Meister location. Alas, all good things come to an end. The Emmonses have been fighting the good battle of running a coffee house. Being musicians themselves, they took on the burden of paying ASCAP and BMI royalty fees so they could host live music at their venue. The ongoing legally mandated increases in the minimum wage are starting to take a toll, and a new player on the scene has dealt a death blow to their open mic. Enter SESAC, another so called PRO (Performers’ Rights Organization), which is demanding a piece of the action. Their fees about equal those of both other associations combined. It is with much sadness that they have come to the decision that if they are to continue running their business, something has to give.

The route they have been compelled to choose is to eliminate the hard-to-regulate open mic and restrict any featured Friday or Saturday night performers to originals, ASCAP, BMI, or public domain material–and disallow any SESAC registered songs. This eliminates a large amount of the most popular tunes, as SESAC’s invitational program includes 30,000 songs from some of the most high-profile, successful artists, such as Bob Dylan, Neil Diamond, Adele, and others. The Kaffee Meister website now includes links to ASCAP and BMI’s massive databases. In addition they are adopting shorter hours, closing earlier in the evening.

Over the past couple of decades there has been a renaissance in acoustic music, not seen since the folk era of the 1960s. Acoustic guitar manufacturers and, more recently, ukulele makers have been enjoying a heyday of demand for their products. Mom and pop coffee shops have had a resurgence in popularity, and open mics have been a staple they’ve often adopted in hopes of creating a feeling of community akin to that of old-world pubs. Unfortunately, those folks who dream of being independent purveyors of coffee are taking on a tough business. The popular saying “How to make a small fortune by opening a coffee house…start with a large fortune” is sadly true. The list of coffee houses in San Diego that once shone brightly but ultimately went down in flames is long. A partial listing includes: the Coffee Cottage, La Mesa; Sweet Delights, La Mesa; The Crossroads Coffee House, El Cajon; Experience Coffee, Rancho San Diego; Bistro Devine, La Mesa; The Friendly Grounds, Santee; Frubble Smoothies, Santee; The Golden Goose, Lakeside; Rebecca’s, South Park; South Park Abbey, South Park; Bugsy’s Brew, La Mesa; The Village Emporium, La Mesa; and Mikey’s Coffee House, Poway. A combination of factors have contributed to those closings, including escalating rents, mega-coffee chain locations opening across the street, increases in the minimum wages, and demands from music licensing organizations.

SESAC is the latest PRO to flex their muscles in this arena. They have joined ASCAP and BMI in demanding royalty payments from small struggling businesses. These venues are purported to be making money by having live music–the reality is they’re lucky to recover the costs incurred. The venue has to add extra staff to cover the evening, though the first hour is when drinks are generally ordered and nursed for the rest of the evening.
If these “performers’ advocates” were truly supporting musicians, they wouldn’t be targeting the open mics where new musicians play for free to develop their skills. Open Mics have been a rite of passage for new musicians–the first step toward the major leagues of the music industry. What successful performer didn’t start out at an open mic? It seems there should be an exemption for open mics and something that protects small businesses, like coffee houses and restaurants, under 3,000 square feet. Perhaps an exception should be made if they gross under a certain amount per year, or their primary income is not the music as opposed to a concert venue or dance hall, or a disco.
As it stands, it appears that open mics are destined to become a thing of the past. Performers Rights Organizations can take a large share of credit for their demise.

Havana Jam ’79: One World Under a Groove