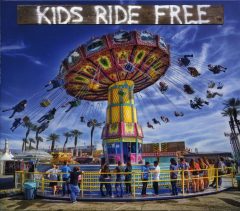 Folks with youngsters will want to catch Kids Ride Free. Designed with families in mind, North County’s JT Moring wrote and performed many of the tracks–singing and playing guitars, banjos, mandolins and other instruments, along with Annie Rettic (vocals, viola, ukulele) and Richie Strell (vocals, spoons, harmonica). The 14 tunes also include a few traditional songs and covers, most recorded with a kid-friendly, lo-fi approach.

Moring’s songs include fare for the younger set like “Mama’s Muffins,” “Bathtime for the Baby,” and “Food Rules Dude.” These have simple melodies and funny lyrics. He also changes things up with “Jump Up Jonny” with vocals drenched in echo and a strong acoustic guitar strum (much like old Everly Brothers tracks), while “World of Dinosaurs” throws in tribal-sounding chants and nice hand drum percussion. Rettic sings lead on her “Leprechaun in the Garden,” which has all the ingredients of a good Irish dance song.

The traditional songs include the familiar “Old Dan Tucker,” “Comin’ Round the Mountain,” and “Ain’t No Bugs on Me.” These all sound familiar and hummable for the kids, and make good sing-along songs. Moring adds kazoo to amp up the fun. The most elaborately produced songs here are covers of folk chestnuts: “This Land Is Your Land” is ushered in with the sound of a steam powered train, then Strell’s vocal, and has three-part harmonies on the choruses; Rettic’s reading of “Puff the Magic Dragon” is a lovely, gentle melody built on ukulele, a perfect conclusion for an album of children’s music and a version their parents will also enjoy.