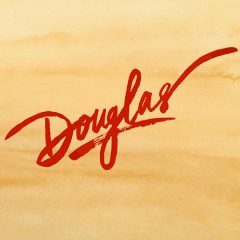 Douglas is the new EP from Blaze Eisner, who created some waves with his last release, 2012’s American Spirit, a sort of “concept EP” that earned an SDMA nomination. Eisner is a thinking person’s roots player; his original folk songs are inflected with lyrical heft, each song often tells a story. The new five-track album is beautifully produced by Sven-Erik Seaholm and has a quiet dignity that seems to be an Eisner trademark. The studio band does yeoman work and includes Darla Hawn, Brandon Zedaker, Clint Delgado, and Arturo San Vincente.

The title track is about a road trip to Douglas, Arizona and expresses road weariness. Eisner relates being homesick, drunk, and broke hundreds of miles from home: “It seems the further on that we go/ The more we learn/ The less we tend to know.” Another effective ballad follows, “Heartland,” a study of a down and out farmer during a deadly drought, who has a wife and kids and can’t get a break. It’s a flatland passion play with a verse about the wife, then one about the oldest son that has a California Springsteen feel. Eisner rocks convincingly on “Honey Run,” a good change of pace, staying in character boogying about country roads and driving-and showing another side to his sound. Things wrap with “Days of Heartache,” which has some Gospel bones, with guitars and organ helping to build beneath his testimony to his lover that things are going to be better.

Douglas is a good listen and is sure to earn Blaze Eisner new fans.

TROUBLE IN THE WIND: Lefty