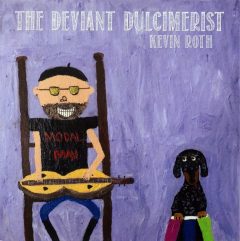 Kevin Roth is a leading innovator of the dulcimer with a worldwide reputation as a player; he writes and sings intimate folk music, ranging from instrumentals to children’s songs. He’s an old pro, first signed to a recording contract 45 years and 48 albums ago, and has played at the White House twice. He moved to San Diego toward the completion of his latest release, The Deviant Dulcimerist, a 13-track collection that serves as a great introduction to his sound.

Roth does the singing on this project, and plays dulcimer and keyboards. On various tracks Mitchell Schecter handles bass and percussion, Steve Dillard trumpet, Nicholes Morales cello, Mike Tapper djembe, and Barry Brown bass. But this is Roth’s show and his vocals are warm and friendly, his songs catchy and eclectic, and his dulcimer playing amazing-sounding. Beyond the songs where one expects the rustic, droning sound of this instrument, in Roth’s hands it is given an expanded voice that forms the basis of all the songs here.

“Crazy Love” introduces the set, a lighthearted winner that finds Roth celebrating his love for his partner, “Angels show up in unusual ways/ You came along and you carried my heart away.” The dulcimer melodies mimic at least two acoustic guitars weaving the fabric of this tune. Next up, the North County coast gets its due with a beach-infused “Swami’s Café,” which has a great hook and interesting story about locals and getting into the spiritual/surf life.

Roth’s has many releases of children’s music and, while “Dorothy” isn’t totally in this direction, it uses the Oz characters and story as pieces in a tale about going on the road. “The Incredible Lightness of Being” floats in on beautifully finger-picked dulcimer figures, and the cello helps this slower, introspective ballad dig to a deeper level, about a man travelling on the road in the West, seeking a new physical and spiritual start.

There is a darker, more mysterious vibe going on in “Deeper Than Blue.” Muted trumpet scales dart in and out, as Roth sings to a departing lover using music metaphors. The disc highlight, the shift in feel makes this one soar, “I remember the colors of the chords you played/ At first wide open, full of hues/ Then you muted and you left me there suspended/ The moment I said I love you.” His penchant for music for kids help make “The Butterfly Boy” and “The Holidaze Turkey Tune” work, and “Cocky Chicken” is a tasty instrumental with its roots in bluegrass.

“Stormy Weather” is the program’s magnus opus at six-and-a-half minutes, chronicling the adventures of a wanderer in New Orleans. Halfway through, it shifts gears and becomes a brisk solo launching pad for Dillard’s trumpet, then returns to follow the protagonist as he tries to “find out who he is.” Joni Mitchell wrote songs like this, and incorporated dulcimer in some of the best ones—this one has that vibe.

Kevin Roth’s The Deviant Dulcimerist is a generous delight.