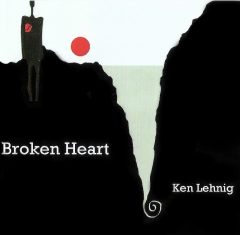 After years as part of several SoCal roots scenes, including singing for the Burning Sage Band, singer-songwriter Ken Lehnig has been releasing solo discs since 2014, and Broken Heart is his fourth. The new CD has the same crew of solid studio musicians aboard like his last two, including Lehnig’s guitar, banjo, mandolin, keys, and vocals; Ed Kornhuaser on electric piano, organ, and string pads; John Hildebrand’s bass, percussion, and vocals; Chris Lehnig on alto, tenor, and baritone sax; Robert Cowan on harmonica; Cory Wilkins on electric guitar and vocals; and JT Moring on banjo and mandolin. As with his previous releases, there is an eclectic approach, production by Lehnig and Hildebrand, and a generous set—like all of his solo releases; this is a 15-song set.

The music mostly fits comfortably in the country-folk genre with mostly acoustic guitars, keys, and plenty of backing vocals for extra oomph. The opener, “Find a Home,” is a good example of the program to come, as a gentle melody about wanting a respite up high where eagles fly—and someone to stay with. It floats in with Robert Cowan’s harp accents above layers of piano and organ, soon joined by sax and an electric guitar break. Slowing down a bit, “The Better Part of Me” adds pedal steel as Lehnig sings of regrets after a romantic breakup. The vibe is basically the same as on “Home,” no surprise that both are singles.

“Pain I Can Feel” features Lehnig’s blues-rock version, with a rolling boogie beat as he growls over the top of guitar, organ, and sax groove and the first drums heard on the disc. It rocks convincingly as he laments his woman tripping off to Cancun with his money. Back on folk ground, “I’d Always Wonder” clicks, as Lehnig is joined on the vocal by his backing vocal trio, and he sings words about a lover, “Well, I’d always wonder if your tears were the ripples on the water/ And your love would fade away.” It is a simple and catchy melody, a highlight with some vocal stutter steps that make the song more interesting.

Lehnig’s past releases have featured narratives with interesting character portraits, and here it is “On the Mississippi,” his story this time about an old riverboat and a young woman in love with a gambler, “shot dead on his wedding day…pray a good man comes along and let the river do its part.” “Kind of Girl” is an introspective, quiet folk tune about a lover, with fingerpicked guitar for accompaniment until late in the song, when added instrumentation gives the soft tune and its 3/4 beat more depth. “Take Away” is a sung prayer, asking the Lord for his spirit, wings, and courage; the church-effect organ and backing vocal chorus injects extra Gospel feel.
The program wraps with “Because of You,” one of the better songs, buried in the set giving Lehnig a last chance to sing the praises of his lover in another solid arrangement. Broken Heart has much to offer Americana fans.