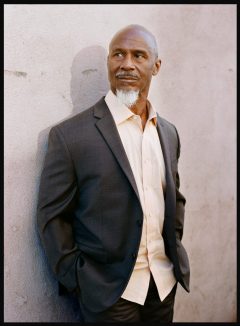 No serious music aficionado will admit to relying on Pandora. But if I were to rely on a Pandora-like algorithm, I’d place Karl Denson’s Gnomes and Badgers somewhere between the Robert Cray Band and Steely Dan. Of course, that ignores every other influence that Denson has poured into his new album. What about the hard-driving funk? What about the soul, the gospel, the hard rock ‘n’ roll? And regarding the band leader himself: Is Karl Denson a singer who plays sax or a sax player who sings? Either way, Gnomes and Badgers is a really rockin’ album that crisscrosses many genres on the funkier side of pop music and the R&B charts of that past 50 years. But more about that later!

Karl Denson was born in 1956 in Santa Ana, California and grew up in Orange County. He is the fifth of six kids. And Karl remembers his older siblings bringing lots of music into the house, especially Motown and Soul. Karl first played the cello, starting in the 4th grade, then switched to sax in the 7th grade when his older brother gave up on the instrument and handed it down to Karl. He started his first band in 8th grade. The band, called Just Funk, was a mix of Hendrix, Santana, and Buddy Miles. Just Funk stayed together for three years, playing local venues around Orange County.

After high school, Karl began taking classes at Fullerton Junior College, intent on becoming a veterinarian. He later transferred to Cal State Long Beach but realized his love was music and didn’t finish. “I hung out in college for three years but spent my time practicing and writing songs.” His goal was to play avant garde and free jazz and he found himself attending local jam sessions more than his classes. “Once we set up and played on the grass at Cal State Fullerton in the middle of the night until security kicked us out.”

By the time Denson was 23, he stopped attending college right when he got his first break. In the late ’70s, Karl was asked to join the backing band for the young R&B singer O’Bryan, a protégé of Soul Train’s Don Cornelius, who was being signed to Capital Records. Denson spent the next two years touring with O’Bryan, opening for the likes of Marvin Gaye. He also made three records with O’Bryan and, yes, appeared on Soul Train.

In the early ’80s, Karl was delivering flowers for a living in L.A. when he started the Karl Denson Quintet. The jazz combo played regularly at the Studio Café’s two locations as well as other clubs and restaurants around Los Angeles. In the later ’80s, Denson played with Christian singer Bryan Duncan and appeared on Duncan’s Strong Medicine album.

Then, in 1987, Karl met Lenny Kravitz. “Lenny was doing production work in Los Angeles. This was around the time Lenny married Lisa Bonet.” Lenny and Karl met again soon afterward when they were both in New York. And although Kravitz plays most of the instruments on his debut album, Let Love Rule, Karl plays all of the sax solos. When they finished the album, they went out on tour for the rest of 1988 and ’89. They played the Rainforest Alliance Concert in NYC on July 4, 1989. The Rainforest Alliance Concert, like LiveAid, was simulcast around the world. Karl continued to tour with Lenny Kravitz through 1993, during which time he appeared again on Kravitz’s second album Mama Said.

Karl also toured in the early ’90s with Fred Wesley from James Brown’s band and Parliament-Funkadelic.

At this same time, Denson met DJ Greyboy. Karl had heard the emerging genre called “acid jazz” in the clubs of Europe. The new music combined jazz improv with dance music. The result was the Greyboy Allstars, which Denson formed with Greyboy, guitarist Mike Andrews (perfoming as Elgin Park), Robert Walter on keys, Chris Stillwell on bass, and Zak Najor on drums. The new group released their debut album, West Coast Boogaloo, in 1995. The Greyboy Allstars would release five albums total, including Inland Emperor in 2013.

With the Greyboy Allstars on hiatus, Karl formed his current band, Tiny Universe, in 1998. The band remains active, playing over 100 shows per year including an upcoming show at the Belly Up Tavern on Friday, January 17. Tiny Universe also just released a new album Gnomes and Badgers.

But Karl’s musical odyssey doesn’t stop there. In the mid-2000s, Karl had just gone through a time-consuming change in management, when Lenny Krvitz called again, inviting Denson out on tour in 2008. Karl went out on tour with Kravitz while fulfilling Tiny Universe’s steady tour schedule.

Fast forward to 2014 and Kravitz called yet again, this time to tell Karl, “The Rolling Stones need a sax player!” And this sax player needed to fill the shoes of famous Stones sideman Bobby Keys. The Stones wanted to know “Can you go out on the road?” explains Karl. “They knew that after 40 years, I know what I’m doing.” Denson got the gig. And the requirements weren’t too demanding. “They like me to improvise and do my own thing. We rehearse a few weeks before tours.” After that, Karl is left to do his own thing on stage. He is quick to add, however, that the Stones are “very approachable.” “We have dinner often. Sometimes Charlie [drummer Charlie Watts] may show up at an after-hours jazz club and we’ll jam.”

Karl refers to Jagger as “Iron Mick” for the singer’s boundless, youthful energy. He recounts the time that they were in Bogota, Colombia, a city with an elevation of nearly 9000 feet. Several in the entourage were suffering from altitude sickness. But not Mick Jagger, who performed his usual, onstage, hyper-kinesis as if he was at sea level. Since 2014, Denson has completed six tours with the Stones, including the U.S., U.K., Europe, South America, Australia, and New Zealand. This includes the historic Rolling Stones performance in Havana, Cuba, in 2016. Currently, the Stones play about 15 stadium shows per year.

Karl Denson calls his new album Gnomes and Badgers a “blues record.” But it’s so much more. It’s a collection of every genre that Denson has explored. Definitely steeped in the blues, it throws in heavy doses of funk, soul, gospel, and even ’70s-inflected classic rock. It’s also a political album. And Karl relies heavily on the image of gnomes facing off with badgers, two entities that have nothing in common as a metaphor for today’s political environment in which two camps—the left and the right—have squared off in a seemingly irresolvable quagmire. To this political standoff, Denson hopes the country soon finds a peaceful solution.

To ask the question again: Is Karl Denson a singer who plays sax or a sax play who sings? The answer is both. He fronts the Tiny Universe with the bluesy grit of any seasoned blues singer. And he bursts out of the pack with horn solos that will make any jazz listener take notice. “I started singing with Lenny since his tour budget couldn’t afford both a singer and a sax player. I even took singing lessons,” Karl remembers. So he’s been singing professionally for over 30 years. Besides singing with Kravitz, Karl sang with the Greyboy Allstars. Of course, his journey from sax player in local L.A. bands to his solo jazz outings to his touring with Lenny Kravitz, the Greyboy Allstars, and the Rolling Stones have shaped him into one of those pros who can play anything, whether that be the pop hooks of the Stones’ “Brown Sugar” or the rougher honks of hard jazz and funk.

“For me, it’s all about composition,” says Denson. “I recently picked up the guitar too and studied lyric writing to improve my songwriting… I’m really proud of Gnomes and Badgers. Out of the 11 tunes, 10 are vocal tunes. The vocals bring people in. But I’m writing the songs as a vehicle for improvisation. So the tunes are going to have solos. They’re dance songs that come from a jazz space.”

The album is available on Spotify and Instagram and has also been pressed on vinyl.
In support of the album, Tiny Universe just completed 10 dates with the Thievery Corporation with many more dates scheduled for 2020. Plus, says Karl, “We always do the Jam Cruise in January.”

Besides touring, Karl has several projects planned for 2020. “I’m writing a new record,” says Denson. The new batch of songs may be released as a single album or in separate groups of songs on several EPs. Denson is also writing a science fiction film script.

Unfortunately, the Greyboy Allstars just played the Belly Up Tavern in Solana Beach last month. So, if you missed them, they won’t be back for a while. But you can catch Karl Denson’s Tiny Universe at the Belly Up next month on Friday, January 17, 2020.

Everybody Has a Song Within: Soulsong.life, a Transformative Songwriting Workshop Series