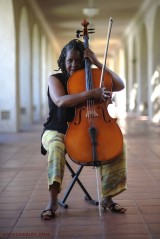 Joyce Rooks smiles warmly and frequently as she reminisces on the patio of Ducky Waddle’s Emporium, a business she owns with her husband Jerry Waddles. Located adjacent to Lou’s Records, the Emporium is a kind of shrine to popular culture and kitsch, generously stocked with books, posters, comic books, and unusual gift items. It also serves as an art gallery and a focal point for the local creative community. Live music performances and workshops of all kinds are held there on a regular basis. It’s a pleasantly overcast late summer morning in Leucadia, and Rooks fondly recounts her adventures as a musician, punctuating many of them with her easy laughter. Although she is primarily known as a pioneer of the cello in non-classical settings, she has found a multitude of ways to express herself throughout her creative life. Interestingly, she reveals a certain envy at people who do only one thing and get really good at it. “I never considered myself a virtuoso. I’ve never been in a position where I could do nothing but practice for eight hours a day. I’ve always had to have a job, mainly because I have no interest in being a starving musician!” Yet she has made a tremendous reputation for herself doing what she loves, be it playing the cello, singing, composing music, fronting a band as a guitarist and vocalist, or creating and teaching about her beloved glass jewelry, this latter pursuit being a particularly strong passion. She teaches at the UCSD Craft Center and makes regular trips to Tucson to participate in a craft show. She cheerfully confesses, “I love glass!”

Although no one else in her family played an instrument, Rooks recalls that the house was always filled with music. Her mom played all kinds of records, including jazz, country music, and the classics. “I remember the impression (Prokofiev’s) Peter and the Wolf and (Tchaikovsky’s) Nutcracker made on me.” While she has lived in Southern California for most of her life, she is a native of Baltimore, and it was there that she first witnessed an orchestral performance. Then six years old, Rooks enthuses, “It was the first time I had ever seen violins playing live and I fell in love.” Her musical education started with piano lessons, but the absence of one in the house proved to be problematic. Luckily, her school offered alternatives. “I wanted a violin, but by the time they got to my name they were out of them. So the teacher assigned me the cello, saying that I had ‘good cello hands.’” It turned out to be a fateful meeting of player and instrument, as the cello would become her lifelong companion. From the ages of 12 to 18, she took private lessons from a distinguished teacher named Irving Lipschultz and played in youth orchestras. When the family relocated to California, she joined the Meremblum Junior Symphony in Los Angeles.

A result of her early exposure to different musical genres was a fascination with a variety of styles. Even while playing the cello throughout junior high and high school, she recalls that “Led Zeppelin and Jimi Hendrix were big at the time and everybody who was cool played the guitar. So I wanted one.” She acquired her six-string skills by learning to play Neil Young songs. “There was a great mix of everything on L.A. radio back then. Rock, country, R & B…we got exposed to a lot of stuff.” This served her in good stead, as she would be called upon to play in many different musical situations. Yet she would always keep in touch with her cello, bringing it out to play the occasional Bach piece every now and then. As Rooks brought the instrument into other realms, she found herself taking point in a movement of cellists whose groundswell is still building to this day. “There weren’t any cellists doing what I did until ELO [the Electric Light Orchestra]. I felt like a loner with a cello!” Of course, nowadays there are artists like Zoe Keating, Erik Friedlander, Melora Creager, Eugene Friesen, and Lindsay Mac who are putting their big fiddles in the spotlight. Rooks’ first serious attempt to rock with her cello was with a band called Wait for Nothing, with whom she toured The Netherlands and Germany. “It was my first time using a pickup, amplifier, and stomp boxes [effects pedals].”

As the ’70s unfolded into the ’80s, punk, new wave, reggae, and ska ascended in popularity, and Rooks was in the thick of things. It was during this time that her abilities as a guitarist and vocalist came in handy. She played ska and reggae with the Trowsers (“where I learned to play on the off-beat”), and the Ideals. An all-female punk rock outfit with the eyebrow-raising name the Cockpits also counted Rooks as a member, and she stayed in the lineup when they morphed into a more mentionably monikered group called the Dinettes. She sang backup on stage and in the studio for local legends, the Penetrators (who recently received a lifetime San Diego Music Award). Of their release “A Sweet Kiss From Mommy,” she emphatically asserts, “that’s not my butt on the album cover”. She hit the road with them and shot a professional music video in Los Angeles when they were being courted by A & M Records. Her vocals can be heard on an album by Carla Olson, “the female Tom Petty”, which featured such notable players as Nicky Hopkins and Percy Sledge. More importantly during this time, she started The Joyce Rooks Band, a versatile ensemble whose sound encompassed the worlds of rock, pop, R & B and reggae. A live recording of a local 1983 gig at Bodies offers solid proof that they put on a tight, fun show. With all of these groups, she was able to play the most popular San Diego nightspots like The Zebra Club, The Spirit Club, The Casbah and The Roxy Theater in Pacific Beach, often sharing the stage with top local acts like DFX2 and Four Eyes.

Rooks’ experience in the world of music isn’t limited to the artistic side.Â  “I used to work at Tower Records across from the Sports Arena as a receiving clerk and a buyer”. While living in Los Angeles, she was employed at the iconic Capitol Records building, working in the marketing department. It was during this time that she was able to meet luminaries like Paul and Linda McCartney and Richard Thompson. Because of her well-rounded background in all things musical, she has an insightful perspective on things. When comparing the music scenes of San Diego and Los Angeles, she says with no uncertainty that “San Diego has more of a cooperative scene. We’re more likely to support artists that we like as opposed to L.A., which is more competitive. It’s kill or be killed.” But none of that has dampened her enthusiasm for composing and performing.Â  In recent years, she has played with Cindy Lee Berryhill as well as with David J, the bassist from Bauhaus and Love & Rockets. Their duo act, Cabaret Oscuro, has done a fair bit recording and touring. Nowadays, she has teamed up with North County artists/musicians Marcelo Radulovich and Jim Call. Their trio, Nicey Nice World, has a rather unique process for creating music. Rooks describes it as “almost backwards”, in that they improvise first, then pick the most interesting parts as the basis for their compositions. One of their websites proudly states, “We never practice. We only perform. We embrace accidents, glitches and equipment failure which, rather than impede, inspire.” Quite spontaneously, she quips that their music might be labeled “Not Jazz”, in reference to its improvisational nature but unconventional sound.

Despite being in high demand, Rooks’ busy schedule has not precluded her from making her own music. She has embraced modern technology, combining it with her many talents to create an engaging body of work. By year’s end she intends to officially release her solo compositions. It will be the first release under her own name since 1983, when she came out with a red vinyl 45 rpm single called “Top Secrets”. This new collection will feature the sounds of electronica, soul, reggae, pop, rock and classical music. She wields these tools of her trade with a steady hand, juxtaposing rhythms and textures in surprising ways. Her grooves are solid and sometimes complex, topped off with well-crafted melodies. The moods tend toward the hypnotic and danceable, resulting in music that is both sophisticated and accessible. It works on a number of levels. Her longevity as a multifaceted creative artist lends her work a depth that cannot be faked. Whether working on her own or with like-minded collaborators, Joyce Rooks is the genuine article.

Colin Clyne Has His Feet in Two Worlds