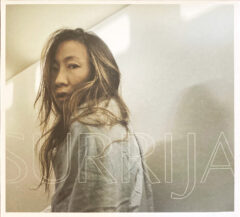 Electro-pop singer/songwriter Jane Lui has a new album that is her debut under her new performance identity, Surrija. The former San Diego artist who now lives in L.A. wrote or co-wrote (with Albert Chiang) 11 of the 12 tracks as a concept album, inspired by the life and works of Picasso. The new disc is self-titled Surrija. This is a project that draws on various influences, but the immediate impression is that the heavily produced mix of electronic instruments, dance beats, with hints of hip hop that utilizes Surrija’s talents as a singer, lyricist, and key boards, synth, moog, mellotron, and software. Ten contributing studio players are listed in the artwork, Chiang (bass and vocals) as well as Maxwell Gualtieri (electric guitar, bass, drum machines) and Sophocles Papavasilopoulos (piano, vocals, clarinet) who along with Surrija are co-producers.
The songs feature a thick mix that surrounds Surrija’s breathy vocals and at various points overwhelms them, but that is more a measure of the style than by design. From front to back, drum machines and electronic effects lead the song structure, with other programming with occasional flourishes of violin and alto flute breaking through. Her voice is buttressed by multiple tracking and backing vocalists. It isn’t a wall of sound, but there are a lot of sounds piled up on some of the songs.
The program gets started with “Nothing Love,” a single that conveys a heartbreak with a lover, and the punched-up dub beat that hammers like a loud metronome contrasts with Surrija’s softer, melodious singing and piano. A lot of electronic noise is there, too, while she lays it down, “the years of definitely maybe you lost me there babe/ Playing god talking loud like a crazy.” “Barcelona” is one of the strongest songs and, like many, it relates to a specific 1937 work of Picasso. It swirls on soaring synths as her vocals refer to the dream effects seen in the art, and the song succeeds in its uplifting approach.
The dance beats are mixed hot on “Sylvette” and on “Minotaur.” Surrija’s voice is much softer, exhaling the words, inspired by a 1935 painting. Things are quieter until, at the two-minute mark, the mellotrons and a battalion of backing vocals join in. Things really take a step out of the box for “She Learned Not to Be So Scared,” a softly rendered instrumental recorded in her native Hong Kong years ago, which shows another side of Surrija the pianist for a couple of minutes. “Turnstile Hostile” features a stutter-step percussion chassis that she paints a discordant relationship story, rapping several measures.
The melodious “Dora” swaps out drum machines for violin and adds Chiang, sharing the lead singing. Ethereal backing singers lift the tune amid electronic decorations as she sings, “You introduced me to your war/ I learned a lot keep folding it in/ Take care of the dark.” The only cover is “Mercy Street.” It is a highlight, as Surrija teams up again with Chiang on the Peter Gabriel track; the song recreates the vibe of the original had it been had electro percussion. Filler alert: deep in the program, “Hum” is 30 seconds of droning electronic noise and gives way to the album closer, “It’s Almost Time,” except that the artwork displays the title and lyrics in mirror-image reverse. What differentiates it is the arrangement-just Surrija singing at a grand piano, and her voice jumps out here more than on any of the electronic dance stuff played earlier. The self-titled debut by Surrija is very electronic and beat oriented, but has some inspired singing and playing in spots.
This album is up for an award for the 2021 San Diego Music Awards.