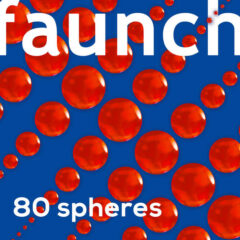 Last June, while the world was just getting used to being quarantined, Faunch released a nine-track disc, 80 Spheres. Then, even more recently, prolific guitarist/writer/singer Andy Faunch was back with another group of songs, Sodium Vapor. His L.A. band with quirky British prog/new wave influences has a San Diego connection—Fallbrook producer/multi-instrumentalist Dave Blackburn was a bandmate of his before both relocated to SoCal. Also, guitarist Michael McClure has been a collaborator on several projects after playing guitar with him in the L.A. band And And as well as others. Along with Faunch, both had roles in 2016’s Venice and Beethoven CD with mastering by Blackburn and guitar contributions by McClure. Both albums are available on the Internet.
The music on 80 Spheres is a potpourri of synthesizers, propelled by hotly mixed drum beats laying down funky hooks. There are plenty of electronic effects making themselves heard, along with moments of serious guitar flash. With the rich and unique brew of sounds, Faunch makes it clear isn’t “an ’80s tribute album,” though on certain tracks there are reflections of the vocal and instrumental artists from the last century who represented the cream of the New Wave crop.
The program kicks off with “Meg Ryan Smile,” turning back the dial a few decades to grab the vibe of the tragically underappreciated postpunk group XTC and even the Cars as Faunch sings “Ooh, you’re a burglar/ You stole my heart at night.” The groove is straight-ahead fuzz bass, giving way to luxurious swells of synth. A bass/drum dance beat is at the core of the disc highlight “Say No Way,” and on “Coventry” it’s a duet with a female lead vocalist. On these and other tracks, the synthesized drums charge the sound, joining the bass hooks for a sonic tapestry. “Step Up” starts slowly, builds and repeats the chorus “Gotta step up and own it” before It resolves into hot guitar soloing.
At nearly seven minutes, “Go!” is another example of a synth/drum groove being pounded home, filling the room with ethereal keyboard sweeps, as the drum heartbeat and echoing sound effects elevate the arrangement—and sound bytes from passenger jet cockpit announcements blend right in. The last two tracks are remixes of “Meg Ryan Smile” with thicker layers of synths, and “Say No Way,” which seems to have a lot of David Bryne DNA. 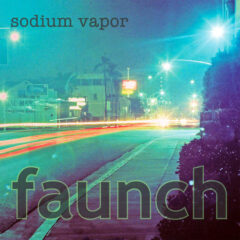 The studio hands on board for Sodium Vapor’s 10 tracks include Faunch on vocals, guitars, bass, keyboards, “samples and manipulations,” and percussion. McClure is the guitarist, while Blackburn is on drums and percussion, and Andy Stone on fretless bass, while trumpet and flugelhorn by Gary Aylesbrook help take the sound in a different direction than on 80 Spheres. “Hopes & Dreams” hustles along on a rapid-fire rhythm line, and the sound is fleshed out by the horns, playing at times in unison with the guitars and keys. The vocal on this tune is largely along for the ride, with the spotlight on the instrumental brew. For “Intracoastal,” a double-tracked lead vocal sings about “Right down South alligator river/ There’s a strong wind, white caps shimmer/ It’s a new day, a new beginning/ And a good day for intracoastal.”
Trumpet lines usher in “Forget,” which sounds unlike anything else on the album, as the flugelhorn and trumpet displace guitars; they are arranged for optimum effect and show a side of Faunch that moves past New Wave roots and marks out some new sonic territory with a remarkable amount of dynamics while he and Aylesbrook are the only players on the track putting together this wall of sound. The soaring and anthemic sound of synthesized keyboards and dense percussion combines to provide a backdrop for the horn interplay. Brass is again dominant on “Center of the Universe,” which dials in the same sound textures as “Forget” while Faunch sings lyrics about his wonderment at the stars and galaxies: “Just wait a minute, wait a moment/ Is anybody there?” The song takes the time to afford Aylesbrook an imaginative trumpet solo, while “Liar” returns to featuring electric guitar with a medium tempo structure and lots of falsetto singing, as a memorable McClure six-string solo helps elevate the tune.
The last two pieces are longer and take strides toward prog as the title song includes nearly four minutes of primarily flugelhorn and percussion improvising before any lyrics are sung, and the words are nearly breathless, surrounded by the majestic, near orchestral envelope. The program finale is “Dreams & Hopes,” an experimental-sounding instrumental that is also much like a suite, opening with echoing bombast as waves of McClure’s Ebow guitar playing and equally eerie keyboard effects float into and out of earshot.
Both of these releases, while differing in focus, bring out Faunch’s talent both for creating floating and ethereal tones and building musical grooves on this soaring foundation. A great listen, especially for folks into prog music.