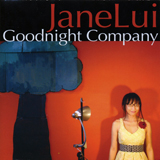 Ah, San Diego. We love you for your lackadaisical sunshiny ways, and we loathe you for your inability to recognize, claim, and retain true artistic genius for your very own. From Stone Temple Pilots to the Dirty Projector’s Amber Coffman who have also made (or have at least thought about making) their artistic exodus, you’ve belied this ineptitude time and again. And now, another great mind has eluded your marine layer indifference to flourish elsewhere, another feather has been lost from the cap that could’ve helped put you on the cultural map once and for all.

San Francisco ‘migr’ Jane Lui, once again with the expert help of studio guru and fellow under-recognized genius Aaron Bowen, has produced herÂ Sergeant Pepper with this third studio album,Â Goodnight Company. The stunningly vast array of instrumentation is a fantastic mixture of archaic and modern sounds that serve the songs without overwhelming the pre-eminent instrument ‘ Lui’s soothingly supple (and boastfully un-autotuned) voice; strings and blippy synths cohabitate symbiotically on ‘Jailcard,’ and ‘Perished’ juxtaposes a ‘Strawberry Fields’-esque mellotron line against Trent Reznor-ian textures (scratchy vinyl LP noise and faint industrial hum in the intro, with a distant echoing gunshot beat further in). ‘Take Me for Now’ is astonishing in its sonic ambition, with full orchestration (strings, horns, vibes, etc.) creating the overall mood of an extant selection from an undiscovered Leonard Bernstein musical. And what a delectable contrast, to go from these lavish set pieces into the stark Nick Drake-ness of ‘Illusionist Boy,’ where Lui’s dulcet ruminations on love (which applies to most ofÂ Goodnight‘s tracks, lyrically) are accompanied only by a rich de-tuned acoustic guitar, and the closing track ‘Last Rose of Summer,’ where only hushed nylon-string pluckings provide the continuo.

There’s an emphatic sense that Lui and Bowen spared no expense to do exactly what they thought the songs needed; this is corroborated by the accompanying special edition DVD, which contains a brilliant 45-minute ‘making-of’ documentary. Interviews with Lui, Bowen, guitarist James Ritts, drummer Jake Najor, and arranger/trumpeter Karl Soukup, rather than diminishing the mystery, actually augment the viewer’s awareness that something truly profound happened in the creation of this work. Well-edited moments of warm humor (maddening equipment failures made light of, loitering cats sitting in on recording sessions in Bowen’s living room) mixed with awe-inspiring footage of horn, small choir, and string sections rehearsing and recording in large rooms, impart the sensation of a privileged, exclusive glimpse into the genius behind a superlative independent music release.

Make no mistake; this record is a piece of Art (one wonders how the hell Lui’s going to pull these songs off live!), so the attention span of all the ADD bud-heads will be tested, asÂ Goodnight Company beseeches your prolonged receptivity to aural adventure. But as such, you will experience the acuteness of hoping that all the grant money (if there’s any left out there) goes to Jane Lui, no matter what city she calls home.www.cdbaby.com/cd/JaneLui

Tyson Motsenbocker: Until It Lands