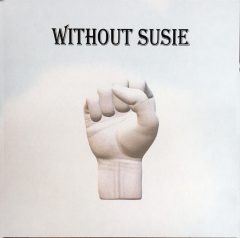 The latest from James Lee Stanley is Without Susie, which collects a dozen new originals by the LA-area singer-songwriter who frequently performs locally. Stanley is a prolific musician who has 34 releases over a span dating back to the early 1970s. His music is finely crafted acoustic folk and pop that features his world-wise vocals and lyrics (included on his excellent website), which are variously autobiographical, incisive, and make astute social comments.

This disc is somewhat different from past Stanley projects in that instead of using studio side players (often well-known ones), this is essentially a home recording he played entirely himself with only help on backing vocals by Rachel Mills. Mills co-wrote one tune and Wyatt Easterling co-wrote two of the songs; the drums, percussion, guitars, keyboards, and bass is all Stanley, including a lot of acoustic guitar playing nice fills and effective use of drum machines.

“Every Highway” kicks off the set, about life on the road, with nicely rendered acoustic guitar figures setting the tone, “the path to follow is within you, it’s somewhere there inside your heart.” The flip side of the optimism in the opener is answered in “Dark Road,” our society reflected in minor chords as the crossroads encountered show a lack of direction and spark, with “dividing lines,” a world stumbling in shadow. Next up, “Redwood Landing” is the smoothest and catchiest musically of all the tracks, and its lyrics soft pedal the message at first, but before long discuss rocks being thrown and crosses being burned in the idyllic titled railroad town.

Stanley wrote “Burt’s Tune” about his older brother, and the busy production includes echoing vocals on the verses that profess his life-long love and describe adventures with his bro, with a chop-chop drum machine beat that propels the song forward. Though it may be the lightest weight lyrically on the album, “Hey Look at You” is catchy with three-part harmonies on the choruses, a brisk pace. and tight arrangement of the many instruments.

“Still Crazy Over You” works well as a personal love song, then Stanley gets his blues on for “Never Say Never Again,” relating his plans to learn from his bad experiences and go back home. There are plenty of blues guitar statements on this song but ends too soon. A lush arrangement helps “I’m All in (Here I Am),” and Stanley scores again with a song about a love commitment that has an irresistible hook. It is buried in the set but is the highlight of the album. Stanley is back on his commentary soapbox, with ample justification for “Hang Up and Drive.” It is a rallying cry for sanity in the age of idiots using their phones 24/7 on the road, “you’ll be texting your friends right up to the end of your dangerous game… the choice is a simple one, it’s dead or alive.” Stanley speaks for all of us on this. Oh, hell yes.

Fans of James Lee Stanley won’t be disappointed by Without Susie, and it should gain him new listeners as well.

Stanley returns to Lakeside for a house concert on June 30 (visit darkthirty.com for details).