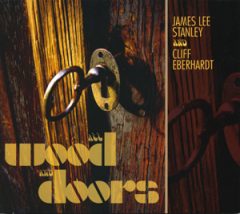 Here’s an idea: take the songs of the Doors, strip away their trademark keyboards and brooding vocals while reworking the arrangements, and recast them as acoustic guitar/harmony pieces. James Lee Stanley and Cliff Eberhardt team up to do it on All Wood and Doors, with surprising success. Eberhardt shares the lead vocal slots with Stanley, a prolific singer/guitarist who did a similar project in 2004 with John Batdorf (All Wood and Stones). Batdorf and Eagle Timothy B Schmit join the principals on backup harmonies. A squadron of eight lead guitarists includes Laurence Juber, former Monkee Peter Tork, and original Doors picker Robbie Kreiger; one of the drummers is former Door John Densmore.

The pristine recording sticks with the most familiar songs, all but two of the dozen are from the Doors first two albums. “Break on Through” shows the approach of the project, an acoustic guitar lick over a mid-tempo funky beat gives way to three-part, soaring harmonies (“Everybody loves my baby”), acoustic slide guitar accents, and an overall vibe that is closer to Steve Stills than anything ever recorded by Jim Morrison. “Take It as It Comes” approximates the original’s melody and pace, but harmonies augment Stanley’s strong vocal and lift it to the clouds. In “Light My Fire,” a jazzy treatment that resembles (and is overshadowed by) Jose Feliciano’s established cover is used to launch the best acoustic guitar soloing on the disc.

The Doors didn’t record a lot of stiffs, but “Touch Me” is one. It’s here, and not bad, since it is totally remade, mostly discarding verses until a fadeout, with a steady downpour of acoustic guitar notes. “Soul Kitchen” is a standout track, shifting gears like the original, not straying too far but filling the quiet spots with guitar and enhancing the song’s punch with big harmonies. An unusual, baroque lick is used for “People Are Strange,” then Kreiger’s unmistakable, spooky-clear single string slide notes add a crowning touch.

Much of the Doors’ music is dark, moody stuff for the most part, but the light and airy arrangement of “Moonlight Drive” makes it float as Stanley and Eberhardt trade lead vocals on the verses. “Riders on the Storm,” minus keys, is still a haunting tale of dread. Kreiger adds some flourishes to a short version of “The End” that has enough deep harmonies that it calls to mind Crosby, Stills, and Nash’s “Cathedral.” It wraps the disc, and it’s too bad this song doesn’t continue its musical ideas longer.

In an ideal world, a disc like this would include a few rearranged tracks from the band’s later albums, like “Not to Touch the Earth,” “Spanish Caravan,” “Hyacinth House,” “Love Her Madly,” or “Waiting for the Sun.” That said, for what is here, the listeners knowing the originals by heart helps the newly-worked out tunes easily connect. All Wood and Doors works for fans of both the band and acoustic guitar/harmony music.

Steve White: Home Away From Home

Steve Earle: I’ll Never Get Out of This World Alive