February 2023
Vol. 22, No. 5
If It’s Thanksgiving, It Must Be Time for a Chloe Feoranzo Homecoming by Steve ThornNovember 2017
Back with a Bang! Java Joe's Reunion at San Diego Folk Heritage by J.T. MoringNovember 2017
Book Review: The Philosophy of Modern Song by Bob Dylan by Ted BurkeNovember 2017
Rick Nash: Bass Man in Demand by Wayne RikerNovember 2017
If Music Be the Food of Love, Play On: Dually Noted Pairs Fine Food and Fine Music by Paul HomiczNovember 2017
Mod Revivalists the Trebels to Reunite for 40th Anniversary Show by Jim TrageserNovember 2017
Harold in the Land of Jazz by Bart MendozaNovember 2017
Sephardic Dance and Music by Yale StromNovember 2017
Loretta Lynn: A Special Tribute to the Queen of Honky Tonk by Terry Paul RolandNovember 2017
Ben Grace Gilmore: It's All About Building Community by Sandé LollisNovember 2017
Advertisements 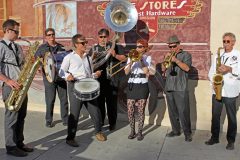 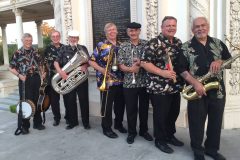 Among the many goals achieved by the San Diego Jazz Festival–now in its 38th year–has been to bring music fans of all ages together, sometimes three generations at a time in one spot.
Leading the youth brigade at the festival, (annually held from Wednesday through Sunday during Thanksgiving week) is New Orleans resident and former San Diego clarinet prodigy Chloe Feoranzo. Although she’s still several decades away from AARP invites arriving in her mail box, the 25-year-old Feoranzo has earned the distinction of being a veteran performer, hopping from ballroom to ballroom at the San Diego Jazz Festival’s locale, the Town and Country Convention Center in Mission Valley.
“The Thanksgiving Fest has supported me ever since I was 13,” said Chloe. “I sat in on my first Dixie jam session that year and fell in love with the style of music. The next year I had the opportunity to experience my first time sitting in on a festival set. Ever since I have been lucky enough to be a part of the festival every year except for one.”

Feoranzo was born in Rhode Island and moved with her family to San Diego. Her schools leaned toward the arts and she thrived. “I went to Pacific Beach Elementary School, San Diego School of Creative and Performing Arts School, Dehesa Charter School and Webster University,” said Chloe. “I started studying music around the age of 10 in elementary school and from there I undertook private lessons. As the years went by, my studying broadened from sitting in with various bands, jam sessions, and mentors.” (One of her more prominent mentors was saxophonist Charles McPherson.)

Feoranzo has an impressive discography which begins with 2008’s Learning to Fly up to the current collaborative CD with pianist Tom McDermott, Zeppelins Made to Order. In between, there were many recordings she appeared on, combined with endless touring and a three-year stint in celebrated roots performer Pokey LaFarge’s band. Chloe was heard with LaFarge and company on “A Prairie Home Companion (2014)” and seen on “The Late Show With David Letterman,” also in the same year.

At this year’s San Diego Jazz Fest, Feoranzo will be performing with the New Orleans-based group called The World’s Finest Apples. “The band has been around since about 2011 when band leader Nahum Zydbel decided to make a record with a few of the counselors from Sacramento Teagarden Jazz Camp,” Chloe explained. “Since then, the band has had a few personnel changes and a few more albums under their belt. I joined in 2016 for a West Coast tour that was a blast. The name itself was influenced by some of the [campers’] imaginations. The current personnel is Nahum Zydbel as leader and guitar, Molly Reeves on guitar and vocals, Keith Penney on accordian and vocals, Chloe Feoranzo on clarinet and vocals, and Joshua Gouzy on bass.”

All the fun in Mission Valley sadly comes to an end for artists and audiences on early Sunday evening, but not before there’s a pull-out-the-stops jam session. Feoranzo is always on board.

On her Facebook page, Feoranzo has posted a video showing her doing a cover of the Foo Fighters’ song, “My Hero,” performed as a 1930’s torch ballad. In the wake of a recent mass shooting in Las Vegas, the video has taken on a greater poignancy.

“I had brought the idea of covering the Foo Fighters to (pianist) Scott Bradlee when we recorded the video and we ended up filming this song about two months ago. Since the video hadn’t come out yet and the terrible tragedy occurred, I asked Scott if we could do something in honor of the people who helped others during that terrible night. He thought it was a good idea and through the PMJ social media asked the public what would be the best option to donate money to help. Through lots of wonderful people they found out about the University Medical Center of Southern Nevada which donations allow them to give care to the uninsured. May these tragedies come to an end one day.”
Saturday’s big day and night of swing dancing at the San Diego Jazz Fest starts at 3:15 p.m. with the Kris Tokarski Quintet, followed by San Diego’s High Society Jazz band backing the Sweethearts of Swing. Next on will be local “Queen of the Boogie,” Sue Palmer, and her Motel Swing Orchestra. The high energy of San Diego’s Memphis Speed Kings will again be backing Michigan’s Dave Bennett. This year’s headliners at the Swing Extravaganza will be the Candy Jackets (Los Angeles) and the Jonathan Doyle Swingtet (Port Townsend, WA).

Other local acts slated over the festival dates are the Euphoria Brass Band, the Mission Bay High School Preservationists, the School of Creative and Performing Arts Band, the Heliotrope Ragtime Orchestra, the Jazz Jammers, Champagne Dixie, the Mad Hat Hucksters, and the Uptown Rhythm Makers.

Death and a Return to Wholeness: Joe Garrison’s “The Broken Jar”