January 2023
Vol. 22, No. 4
Death and a Return to Wholeness: Joe Garrison’s “The Broken Jar” by Thomas LarsonNovember 2017
Back with a Bang! Java Joe's Reunion at San Diego Folk Heritage by J.T. MoringNovember 2017
Book Review: The Philosophy of Modern Song by Bob Dylan by Ted BurkeNovember 2017
Rick Nash: Bass Man in Demand by Wayne RikerNovember 2017
If Music Be the Food of Love, Play On: Dually Noted Pairs Fine Food and Fine Music by Paul HomiczNovember 2017
Mod Revivalists the Trebels to Reunite for 40th Anniversary Show by Jim TrageserNovember 2017
Harold in the Land of Jazz by Bart MendozaNovember 2017
Sephardic Dance and Music by Yale StromNovember 2017
Loretta Lynn: A Special Tribute to the Queen of Honky Tonk by Terry Paul RolandNovember 2017
Ben Grace Gilmore: It's All About Building Community by Sandé LollisNovember 2017
Advertisements 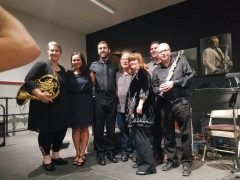 Few composers push so many musical moods onto their listeners–shifting from ecstatic to brooding on a dime–as much as San Diego’s Joe Garrison does. He interrupts his pieces with silence only to shock them awake with sonic surprise. His unconventionality is twin-engined: sound’s nature to vanish before us and music’s design to take us somewhere. We do get somewhere but Garrison stops regularly for coffee like a night-driving trucker. He loves studying the territory’s map, momentarily pondering the road he went down–and then, shifting gears, heading off in a new direction.

Such is the peculiarity and rarity of this bird–the rarest ornithologist I know locally–a composer who, having prodigiously written for Night People, a full-throttle 19-piece jazz orchestra, loves emphasizing the ephemeral in his chamber works. Of that recent ilk, we heard two years ago, “My New Home,” and last year, “The People Upstairs,” and now, “The Broken Jar,” which he premiered and conducted at Dizzy’s, Morena Boulevard’s acoustically sharp Musicians’ Association Hall, last month, on October 14.

This new 55-minute quasi-jazz piece–I have it from the insomniac Joe that he’s got to get the music out of his head and into a score before he can sleep–is in eight sections and written, minus drums, for bass trombone (Brian O’Donnell), French horn (Jane Zwerneman), clarinet/bass clarinet (Robert Zelickman), and flute (Lori Bell), steered strongly by upright bass (Chris Duvall) and piano (Melonie Grinnell). Bell, Duvall, and Grinnell also improvise, half the fun of any Garrison work. Echoing the self-conscious gravity of late Stravinsky, the composer mixes spiky riffs, mustardy blends, slingshot solos, and Garrison’s trademark narrative stops and starts as though the music is a clock he’s constantly rewinding.

To explain his chaotic play, I need a playful metaphor. Often a section opens with a sudden skittish figure, a water spider, say, which, with minor motivic transformation and syncopated rests, manages to float on top of the pond. Garrison pushes this figure to dart, to stall, to quiver. But he seldom repeats the motive. Once written, twice varied. He jolts the tack with bursts of rhythm, color, melodic inversion and retrograde. He next shades the figure with chordal fusions of brass and winds and then nudges the spider to scurry, turn, wobble, stop, take off again–peripatetic, freewheeling–on and on.

Garrison develops these eight-legged motives in unpredictably jagged and lyric ways. A listener must turn her ear to the unexpected, not await or anticipate the direction (as most of us do with jazz that’s riff- and pulse-driven). The most stable part of all this stop-n-go are the (relatively) long, free solos. These flutter loose from the surface, like dragonflies, hover and glide away, seeking sandy shores. Again, chordal tints return, followed by quick-cut silences that pierce their way in as well.

It’s an urban music of traffic lights, stop signs, and circling the block for a parking spot.

In “The Broken Jar,” instability rules because it butts in so often. Garrison won’t let grooves settle in. He won’t let one’s toe start a-tapping, though he claims, in the program notes, there’s an allusion to Motown. (I may have heard a bar or two of Smoky Robinson.) Instead, Garrison wants to discomfit the textural richness almost immediately so that it dissolves or vanishes. He’s stuck on music’s ephemerality but not before he has his brief, cryptic say.

(In his “composer’s statement,” the Buddhist-inspired Garrison says: “The idea [for “The Broken Jar”] is–of dying being a return to wholeness: the broken jar is the body, mind and vast layers of subtle perceptions we have of ourselves as individuals, which separate our awareness from our true nature.”)

Musically, he’s best when he’s least cryptic. For example, in the 4th and 5th movements, “Devotion — Dissolution” and “The Broken Jar,” Garrison gives these sections an unabashed architectural confidence. We still hear rapid shifts in focus but also a willingness to stick around an idea longer than usual. We hear, too, that dark, round, scheming sound of horn, trombone, and clarinet together–pithy sustained chords, clanging bells or passing honks. Here, Garrison’s ideas bold themselves, and our notice, when he lets himself lounge and not grab his hat and run.

Also, deftly inventive in these movements is pianist Grinnell, charging through her several improvs with some hard-hammering seconds and arpeggiated outbursts, and flutist Bell, crafting her solos to shimmer like an autumn wind shaking an Aspen. This argument between these two soloists (another by bassist Duvall was also memorable) and the breathy punctuations of the brass and winds makes for a marvelous musical dialogue. As much as Garrison’s work tries to stay in one place it must skate and skitter on, impatient, drawn by that curled come-hither finger of death.

If It’s Thanksgiving, It Must Be Time for a Chloe Feoranzo Homecoming