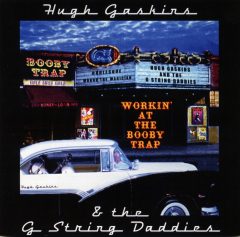 The artwork on blues rockers Hugh Gaskins and the G String Daddies’ new disc makes mention of their dual affection for both the article of apparel and the fat, unwound third treble string on a blues guitar. In a pentatonic “box” scale, a hard-working blues rocker will probably hit, bend, slide, and shake G the most.

Workin’ at the Booby Trap is the new CD by Gaskin and his crew. He has been on the local blues scene since the ‘70s and his five discs since 2001 include Big Legged Woman in 2008, with the G String Daddies lineup. It’s a power trio: Gaskins writes, sings, and plays guitars (as well as the rare keyboards); Charlie Gordon (bass) and Dan Renwick (drums) are the rhythm section. There 15 tracks here, nearly all of them fast and dirty, blues-based rock. Gaskins gets props for trying some style shifts within the genre, but there aren’t many attempts at subtlety or nuance.

Within a few tracks, a few things are clear: Gaskins does a lot with what God gave him as a vocalist, with some Elvis and Eric Burdon influences. And, while he isn’t a head-chopping guitar god either, he has plenty of licks up his sleeve; his clean lines fill out the power trio sound and take good advantage ofÂ  Renwick’s strong beat. While the mix sounds a bit murky and crowded, it’s perfect for the Daddies’ sledgehammer groove.

“‘56 Ford,” “You Can Tell She’s an Angel (from the ink down her sleeves),” and the title tune are straight-ahead rockers about the femme fatales of the car and biker-bar world. Gaskins delivers “Ford” using Detroit-iron sexual metaphors, while “Workin’ at the Booby Trap” hustles along, telling about his baby, the chorus line dancer. This tune has a winning guitar hook behind the beat on the chorus, a disc highlight. “You Got the Devil Goin’ On” is a another standout track with the best Gaskins vocal here, with echoes of Billy Idol and the Big E himself.

Not everything works — “Let Go the Dream” and the similar “You Can Never Go Home Again” attempt to back off the throttle with rockabilly ballads; they aren’t bad but come off bland, and the 58-minute disc has its share of filler. More interesting is the pedal to the metal “Nothin’ but a Smile Boogie,” with minor “four and five” chords in an otherwise straight-up 12-bar boogie. ZZ Top doesn’t play it like this, but it gives the tune sort of a Gaskins sound.

A different rockabilly shuffle, “Pretty Baby Come On,” has honkytonk electric keyboards and more of Gaskins in Elvis mode, a break from the blustering rockers and power ballads. He reaches into the Animals/Yardbirds ‘60s Brit Blues toolbox for “Do Not Go Gentle in the Night,” the riffs are familiar, the tune overblown, but it is still a fun listen. So is the charging “Broken Bird.”

Workin’ at the Booby Trap is blue-collar power trio music served straight up, offering raw energy and succeeding on its own terms.