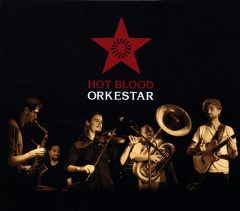 From its opening strains of a big, loud tuba and saxophone, you know you’re going to be in for a wild ride with this premier CD from the Hot Blood Orkestar. This music is boisterous, bold, and as uncompromising as Ted Cruz on a Tea Party bender.

Hot Blood Orkestar performs Eastern European, specifically Balkan, music, with its rich mixture of rhythms and unusual accents and embellishments. Though the Balkan countries are just across the Adriatic from Italy, which gave us Verdi, Puccini, the piano, and Sinatra, the music of the Balkans differs markedly from the Western tradition that is built around Do Re Mi and simplified rhythms and meters. Inheriting the Western scales during the time of the Roman Empire, the countries of Croatia, Serbia, and Bosnia (You can also throw in Romania and Hungary to a greater or lesser extent) fell under the Ottomans for hundreds of years — a time in which the musicians of that area of the world assimilated tonalities, sensibilities, and most notably the odd metered rhythms of the East — until that empire crumbled in the battles and broadsides of World War I.

Hot Blood Orkestar does an incredible job of performing the Balkan music, adroitly executing the combination of Western harmonies with Eastern rhythms and sensibilities. Purists of Eastern European music, those folks in the circle dance community who have been importing records and trading tapes of Bulgarian and Slavic music for the last 30 years, might note that Hot Blood Orkestar places an American accent on this intriguing music. They have added a drum set and electric bass (at least on most of the tunes) to their ensemble, something that has not been in the musical tradition of the villages of the Balkans.

Purists, let me have a word with you before you turn up your nose at the Hot Blood Orkestar. Music really has no geographic boundaries. And as well, music has been transplanted across boundaries and been enhanced by the act of transplanting. Purists might consider blues and rock ‘n’ roll, both distinctly American musical forms, from Britain to be second rate, but they are dismissing Eric Clapton, the Beatles, Led Zeppelin, and the Who.

Those bands, hundreds of other British performers, certainly changed the idea of what blues and rock ‘n’ roll was all about. They added a British take on the music. Was it illegitimate? Hardly. That being said, don’t be fooled by the last selection, “Funkadelic,” on this disk. It has nothing to do with Parliament, Maggot Brain, or George Clinton.

This is an outstanding initial release from a truly dynamic band. If you’ve been part of the circle dance community and have grown to appreciate the music of Europe’s southeastern countries, or if you’re a fan of klezmer or Gypsy music, or if you just enjoy dynamic and enthusiastic performances from young musicians dedicated to a vibrant and engaging musical tradition, then the Hot Blood Orkestar’s compact disk should be added to your CD collection.

DAVID BRAUNER: Spokes on a Wheel