February 2023
Vol. 22, No. 5
Guitar Workshop Plus: A Great Way to Improve Your Chops by Bart MendozaMay 2017
Jeff Beck: A Tribute by Ted BurkeMay 2017
Marcus Petronius Bashore: The Best Seat in the House by T.E. MattoxMay 2017
Pacific Wave: A Surfin’ Safari May 2017
The Winter Dance Party 1959: The Night the Music Lived by Terry RolandMay 2017
Back with a Bang! Java Joe's Reunion at San Diego Folk Heritage by J.T. MoringMay 2017
Book Review: The Philosophy of Modern Song by Bob Dylan by Ted BurkeMay 2017
Rick Nash: Bass Man in Demand by Wayne RikerMay 2017
If Music Be the Food of Love, Play On: Dually Noted Pairs Fine Food and Fine Music by Paul HomiczMay 2017
Mod Revivalists the Trebels to Reunite for 40th Anniversary Show by Jim TrageserMay 2017
Advertisements 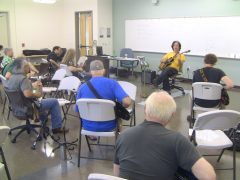 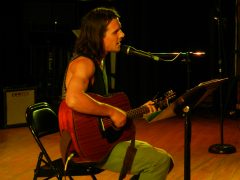 Any musicians out there looking to hone their craft will want to check out Guitar Workshop Plus, taking place on the campus of California State University San Marcos from June 18 -23. The music camp is an immersive experience, with classes and seminars open to students of all ages and skill levels, in any style of playing. While guitar is a big part of the proceedings, there are also classes available for everything from bass to songwriting.

Founded in 2002 by guitarist Brian Murray, Guitar Workshop Plus happens annually in four cities: Toronto, San Diego, Nashville, and Seattle. “We are based in Canada, but right from the beginning we had so many Americans that were attending our classes and just saying, “Why don’t you bring this down to the States?,” he said. “It made sense, so I made the decision to expand a bit across the border, with three different locations to make it more convenient for everybody to attend. The irony is that we now have people from Canada who attend the workshops in the U.S., because they like going to Nashville or San Diego.”

While it’s not uncommon for a musician to teach music as a side job to performing or session work, putting together a program of this magnitude and running it successfully for 15 years is a huge undertaking. For Murray it’s just an extension of his love of teaching. “The original idea was to create something unique, something you couldn’t get elsewhere,” he recalled. “One-on-one lessons are great, but we wanted to create an atmosphere in which no matter what age level or style you were, there was a spot for you. You would not only be able to get the nuts and bolts in terms of technique and theory and applied concepts and things like that, but you also would have performance opportunities, you would have a rhythm section and ensembles to work with, and then there’s the icing on the cake, which is bringing in these huge names to teach and perform. So we give you opportunities to spend time with, instrument in hand, some of the greatest players out there.” His mission statement for Guitar Workshop Plus: Let’s just create something that has the “wow” factor, something you can’t get anywhere else.

To this end Murray has succeeded. Over the years a host of legendary players has taught at the workshops, including Alex Lifeson (Rush), Joe Satriani, Albert Lee, Steve Vai, Robben Ford, and Victor Wooten. This year’s teachers in San Diego include rocker Andy Timmons (Danger Danger), blues virtuosos Wayne Riker and Debbie Davies (Albert Collins, John Mayall), and bassist Brian Beller (Dethklok). Murray points out that it’s not easy to become an instructor at Guitar Workshop Plus. “We get a lot of resumes,” he said. “I’ve got a big box full right now, but it’s important that everything works. We pride ourselves on three things with our teachers: They have to be a great musician, of course, and they’ve got to be a great teacher but, most important, they’ve got to be a great person. Even if you have one or two of those things, if you’ve got an ego or just aren’t an approachable person, it won’t work. Students have to be comfortable with their instructors; we spend a lot of time together. We may be going to dinner, but we’re still going to be talking music.”

Murray feels it’s that sort of interaction between students as well as instructors that makes the biggest difference between Guitar Workshop Plus. “I base that on the feedback we get from our attendees evaluation forms and what they tell us,” he said. “There are other programs that have popped up that try to compete with us and some of them are a lot of fluff. They’ll bring in some names, they have some money to throw around, they charge a lot for people to attend and then when people get there they realize it’s really nothing more than a photo op. They’re basically thrown in the rooms to jam, the level of instruction and the amount of structure to the program isn’t there. Then the guest artist shows up, poses for photos and signs some autographs. Ours is more hands on. You get to sit in a room with in the room with someone like Andy Timmons or whoever is with us at any particular place and work and pick their brains on their techniqueÂ  and improvisational concepts, so that part is really unique.” Murray notes that these seminars are also good for networking “Let’s face it in this day and age a lot of people are sitting around playing on their own or playing with computer backing tracks and that’s just not the same as interacting with other players,” he said.

Wayne Riker, returning for his third year of teaching at GWP, concurs. “There’s nothing like live interactive playing to improve your overall musical skills in addition to the mutual support and encouragement from the staff and fellow pickers,” he said. Having taught guitar for decades and written numerous books on the subject, Riker is pleased with the workshops approach. “As a teacher it’s a unique opportunity to reach a full classroom of students and share my knowledge with many at a time,” he remarked. Riker points out the basic schedule can be hectic but very rewarding for students. “There’s five hours of classroom time with one of those hours devoted to playing with a pro rhythm section in the auditorium,” he said. “That’s in addition to visits by nationally known bassists and guitarists as well. It’s a 12-hour day total, which also includes clinics on specific topics, student jams, free time and faculty, guest artists, and student performances.”

There are concerts every night, with the first featuring the faculty. “It gives the attendees the opportunity to see the high caliber of the instructors and what they have to offer them, as well as what they can pick their brain for during the week,” Murray said. Guest artists also perform concerts, open only to students.

Why choose San Diego over another city for Guitar Workshop Plus? “I’ve always been partial to San Diego,” Murray said. “It’s a beautiful city, the people are real. We did look at locations in Los Angeles and Orange County, but these facilities we’re in now were perfect, new and modern, with great performance spaces. It’s great because it’s accessible to everyone in San Diego and close enough to Orange County and Los Angeles that anyone can come down.” While there are no plans to add more cities to GWP’s roster, according to Murray, “never say never. It would have to be the right time and place, but if it made sense I would love to expand things.”

With 15 years of workshops behind him, Murray finds it difficult to pick his favorite thing about Guitar Workshop Plus. “There’s what I call “magic moments,” he said. “Sometimes they are funny, sometimes touching, but things happen that are special, such as a musician playing with their musical hero.” Often when guest artists come in, they’ll not only play with the students in class, they’ll also invite them up on stage. “When Gary Hoey was here last year, he didn’t want one person to walk away unhappy, so he and the band did a big blues jam at the end of his performance,” Murray said. “Right away there was a lineup of students with guitar in hand, just getting up and playing a couple of choruses with him. It was a lot of fun and people were just on cloud nine about it.” The concert ran well past its original time frame. “It was the longest blues jam in Southern California History, but everybody left happy,” Murray laughed.

“That said, for me personally, keeping in mind that I only see many of these people once a year, the greatest reward is that we have many return attendees,” he said. Riker agrees. “Each year a significant amount of previous students returns, so GWP has become an eagerly anticipated event to see established friends and guitar peers,” he commented.
To date Murray has worked with thousands of students, happy to be able to help so many performers make musical progress. “You’ll see someone young that came in at a beginner or intermediate level,” Murray said. “And they were doing a rock class to start and the following year they’re doing a blues class or something and so on,” he continued. “And after two or three years you see how they’ve blossomed into this really great, versatile, well rounded musician. That’s the reward right there,” he said. “At the end of the day, what I offer is music instruction so you can grow as a musician.Â  I get to see the growth in them as a musician and as a person,” Murray said.

To register for the June session or for more information, visit www.guitarworkshopplus.com or call 905-567-8000.