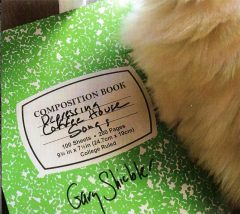 San Diego native Gary Shiebler was last heard from on last year’s When the West Steals Your Heart, a project with his Nashville band Thursday Night Fishing Club. On that two-disc release, Shiebler displayed, on several ear-catching acoustic and alt-country tunes, a knack for capturing catchy, lightweight melodies written about ordinary life and ordinary people, then recording them with the warm harmonies and smooth instrumental expertise typical of Nashville artists. He is back with a solo project that boasts some of the same backing musicians (and in spots the same background hiss) as well as much the same artistic approach in his new disc, Depressing Coffee House Songs.

This album contains 12 Shiebler originals, some recorded in Fallbrook and some in Nashville. His vocals are absolutely stellar, delivering his lyrics in a deep, earnest way that drives them home and conveys the right emotional tone to each tune. The supporting cast varies and is top-caliber but are there to give him a canvas on which to paint. “I’m a Local” opens and is a snapshot of the rest of the disc, a medium-tempo acoustic country rocker with his vocal hot dead center, describing his familiarity with the best bars, hottest cars, and who is who in this town-because he has “stuck around;” it clicks on all levels.

The album is somewhat ballad heavy, but most are very well executed, like “In the Meantime,” with vocal harmonies by Sara Syms and standout keyboard work on piano and organ by Rob Whitlock, which build it up. Shiebler shows his gift for quirky storytelling on “Outside,” a lively song about his days as a kid riding around on a bike, then in a car. There is a Springsteen vibe to “Stayin’ Home,” which has a big arrangement and uses a framework of grand piano, keyboard echoes, and layers of sound to surround his observational story about family members from toddler to grandmother-on the day she is sent away. A great arrangement helps this highlight.

The best tune here is “Beautiful Misery,” a smooth rocker about a woman who clings to the dark side: “She blames all of her problems on her mother and dad/ She thinks something’s wrong when she’s not feeling sad.” It has the snappiest hook and best lyrics on the disc and, besides, most listeners have known someone like this. “A Place to Ride” is one of two tunes that had versions on the West Steals Your Heart release, and here it stands out for front to back tight male/female harmonies. The other carry over is the closing “Fight for You,” a strong ballad that finds Shiebler pledging his love: “Until the day I die/ I will fight for you.” It works because of the delivery, couched in soaring keyboard echoes and heroic grand piano flourishes.

Depressing Coffee House Songs is an impressive collection of roots music by a Nashville pro with San Diego roots. It should shine new light on Gary Shiebler’s talents as a writer and singer.