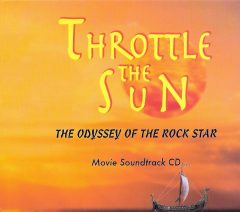 Throttle the Sun: The Odyssey of the Rock Star is an upcoming documentary by Raul Sandelin sure to be a must see for anyone who lived through the era of the rock band and rock star as cultural icons. The era of hair metal, groupies, excess, and trashed hotel rooms isn’t completely over, but YouTube previews show tasty tidbits of interviews and footage from this movie that offer revealing peeks inside the glitz with commentary by people that lived in the fast lane themselves during its prime.

The soundtrack to Throttle the Sun is here. Sandelin (a regular Troubadour contributor and producer of two other excellent documentaries about rock journalism) is not only a writer and filmmaker but also a musician. His alter ego, the Flying Sandolini, wrote, sang, and played the instruments on the nine tracks—with some hot guitar and bass contributions by veteran El Cajon musician Jack Butler (Private Domain, Glory).

The music is a patchwork of rock styles, with a nod to the over-driven guitars and hedonistic lifestyle that populate the movie and the artists in it. “Won’t You Comfort Me” kicks things off, a great way to start, as choruses of backing vocals soar above Sandolini’s vocals entreating a female lover, “Hey baby, won’t you shake for me girl?”—a sort of basic hard rock ‘n’ roll question—and pounded home by scorching lead guitar licks from Butler. Snappy drums usher in the instrumental “MiniVoxxx,” which again uses ethereal backing singing to lift the arrangement; it adds layers of power chords, keys, and guitar over a repeated floating riff, a sort of metal/ psychedelic/ surf mantra, if a head banger were one to meditate.

“G-Freak” finds Sandolini rapping the verses over a synth/drum groove that recalls many late-era New Wave anthems, with just enough salaciousness and swagger to keep things light for five minutes, “Hey, little girl, let me give you a whirl/ Let me climb up your tree like a lonely squirrel/ Lookin’ for love, hiding nuts for the winter/ Wanna play house with a fellow sinner?”

Acoustic guitars pave the way for “Confessions of a Film Fox Reader,” and again the lyrics seem to have tongue firmly in cheek, as Sandolini wants the subject girl to fall for him, just like in the flicks. Like “G-Freak” ties into the documentary with its hedonism, the connection here is about the world of journalism, magazines, and films. “Girl Named U” has a sixties-style AM radio feel, as he sings raves about his new crazy, flirting girlfriend.
The program has some instrumental interludes, including some stellar work by Butler on “Viking Stampede.” The finale is a bonus track, “Greasy & Groovy,” which rocks convincingly, even as it spoofs the Sex Pistols specifically and punk in general. Throttle the Sun’s soundtrack is a great companion piece to a very fascinating movie about a cultural phenomenon we may never see again.