This month we pose five questions to Fred Benedetti, get new strange stage stories from Lori Bell, Bloodstone, and Dave Sawyer, plus take a listen to two recent comps from Big Stir Records and Pacific Records. 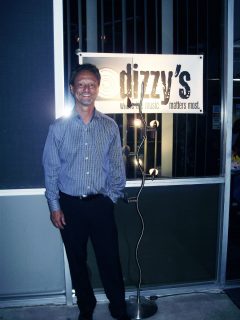 What’s your favorite thing about being a musician?
That you can never stop learning. There is always new and old music that you haven’t heard, played, or written yourself. It’s a huge world to explore.

How would you describe your music? Who are your inﬂuences?
Most people would know me as a classical guitarist (and that is where I’m the most comfortable) who also plays some ﬂamenco, klezmer, and world music, so start out with Andres Segovia, Pepe Romero, John Williams, Julian Bream, and then move toward Paco DeLucia, and then ﬁnally end up with Armik, Strunz and Farah, and Rodrigo y Gabriela. I have such great musicians and friends to perform this music with here in town: George Svoboda, Robert Wetzel, Yale Strom and Elizabeth Schwartz, chamber music with Beth Ross-Buckley and Camarada. But then again, I do love stepping out and playing jazz on my double-neck guitar with world-class players in town like Peter and Tripp Sprague, and pulling out the Les Paul, Tele and Strat for Beatles and ’60s/’70 s shows with my great friends and musicians Jeff Pekarek, James Morton, and my daughters Regina & Julia.

How old were you when you gave your ﬁrst performance?
Here’s an interesting story from my very ﬁrst public performance at age 11. We have to start with a little background on what they called “citizenship grades” in my day. Here’s my report: “Constantly talks and drums on his desk in class.” (That’s an actual quote from a report card.) It got so bad that my 6th grade teacher, Mr. Okazaki, created a 10-point demerit system, and anybody getting 10 demerits would be put into “dictatorship.” That student could not participate in any class activities and only was assigned separate assignments by the teacher. I was put into “dictatorship” the ﬁrst day of school! My teacher did notice, however, that I could play guitar and my only saving grace that semester is that I accompanied the entire 6th grade class at our ﬁnal farewell concert for the PTA. The song was called “Today,” and I played well (no nerves) and the audience loved it. But right after the performance I remember I hit the ﬂagpole really hard with my guitar and I didn’t know what to do… so I saluted it! The audience laughed and I vaguely remember Mr. Okazaki shaking his head.

What’s the strangest thing that’s happened while you were on stage performing?
Just recently at a concert celebrating the music of John Lennon at Dizzy’s (a full moon night) we had a few odd things happen. In the middle of a song our drummer (who was playing on an electronic drum-kit) hit something that started a metronome with the most bizarre set of sounds going while we were doing a huge rocker, “Yer Blues.” I was in the middle of a solo and I thought, “Man, am I hearing that ridiculous metronome again? The one we had heard at an earlier concert featuring the entire Rumours album? We all looked at him and he was pushing all sorts of buttons and it just wouldn’t go away! I was motioning to our sound man to just turn his channel off! I was so embarrassed but the audience thought it was particularly funny, especially those that had been to the Rumours concert. Perhaps that would ﬁt “the most embarrassing thing on stage.” It’s okay though because I love the guy and now it’s in my story here. Here’s the strangest: At the same concert a cat just walked up on stage while we were playing. The band and the whole audience was mesmerized at how comfortable it was just walking around and then it left the stage at the end of the song. Could it have been the spirit of John Lennon visiting?

What’s the best thing that’s happened to you through music? Music has given me a life of joy, a life with a musical family, and a life with amazing friendships.

Lori Bell: “Someone passed out at a show from an allergic reaction to a medication. I thought the person had died and I sort of freaked out.”

Bloodstone: “One night me my wife and I had a show up in LA at this club called The Airliner. Well, as we were getting ready to do our thing, another artist from San Diego (no need to mention this person), got on stage to support—and kicked the curtain down behind us by accident. It revealed a lot of chairs stacked up to the top. We all started laughing and went on with the show—it ended up being all good!”

Dave Sawyer: “I spent a week in the hospital once. It was the ONLY time I’ve been in a hospital, except for visiting. My parents brought a guitar to me so I wouldn’t be so bored. I was playing it one day and heard somebody down the hall start jamming on harp with me.” 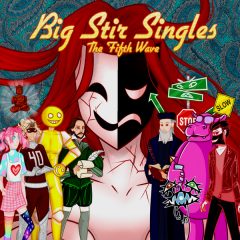 The Basics: 22 songs from 11 bands split into A-sides and B-sides on one CD, the fifth such compilation from Big Stir Records. This is uniformly excellent, an essential listen for fans of rock’s melodic side. Favorites include the Morning Line’s “Nostradamus,” found here in two distinct versions, one highlighted by synth, but there is no discernible drop in quality between the A songs and B songs, indeed the albums high point is found on the album’s second half. Mod Hippie’s “Shimmering Sound,” is all groove and psychedelic sixties period feel, complete with Theremin and harpsichord, all wrapped around a hypnotic tune. Also particularly radio friendly is Lannie Flowers’ “Summer Blue,” an earworm with a really good chorus hook—his “My Street” is also a ” a jangle-and-slide pop gem, with excellent Lynne like production. Meanwhile, the GoAllTheWays’ “Silly Girl” hits all the right marks as well, with plenty of chiming guitars, handclaps, hooks, and soaring harmonies. Fans of sixties rock/pop, power pop, and classic radio singles will enjoy this collection, with four additional volumes to investigate. 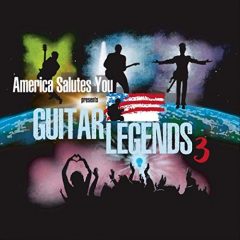 Guitar Legends 3 (Pacific Records 122719)
An excellent souvenir of the Guitar Legends 3 concert, which was recorded November 24, 2019, at Embarcadero Park South, as part of the inaugural Wonderfront Music Festival in downtown San Diego. The full concert, running 90 minutes, was broadcast on December 27 via the CW Network, but here we have an effective distillation with 11 key tracks. The term “All Star” is over used these days, but certainly not in this case—the album features guitarists Billy Gibbons (ZZ Top), Nancy Wilson (Heart), Steve Lukather (Toto), Warren Haynes (Allman Brothers), George Thorogood, and Charlie Starr (Blackberry Smoke), plus singer Ellis Paul (Tower of Power), alongside a backing group that included horn player Ritchie “La Bamba” Rosenberg (Bruce Springsteen) and drummer Kenny Aronoff (John Cougar). The album sounds great, with solid performances all around. Highlights here would be the songs from Haynes’ “Soulshine” and “Rivers Gonna Rise,” both with stellar guitar work, plus a high-octane version from Thorogood of “Move It on Over,” but just as important are the unique team-ups included here, such as the opening cover of ZZ Top’s “I’m Bad, I’m Nationwide,” featuring Gibbons, Lukather, and Wilson. A must for fans of the featured artists or classic rock in general, with a bonus that funds raised through this album go to benefit brain and mental wellness charities for veterans and first responders.