January 2023
Vol. 22, No. 4
Eric Freeman: The Blueridge Boy by J.T. MoringAugust 2016
Back with a Bang! Java Joe's Reunion at San Diego Folk Heritage by J.T. MoringAugust 2016
Book Review: The Philosophy of Modern Song by Bob Dylan by Ted BurkeAugust 2016
Rick Nash: Bass Man in Demand by Wayne RikerAugust 2016
Mod Revivalists the Trebels to Reunite for 40th Anniversary Show by Jim TrageserAugust 2016
If Music Be the Food of Love, Play On: Dually Noted Pairs Fine Food and Fine Music by Paul HomiczAugust 2016
Harold in the Land of Jazz by Bart MendozaAugust 2016
Sephardic Dance and Music by Yale StromAugust 2016
Loretta Lynn: A Special Tribute to the Queen of Honky Tonk by Terry Paul RolandAugust 2016
Ben Grace Gilmore: It's All About Building Community by Sandé LollisAugust 2016
Advertisements 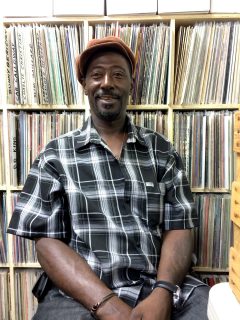 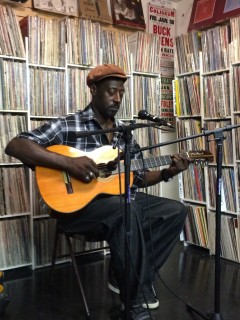 Living the Blues
Sitting down with Eric “the Blueridge Boy” Freeman and a guitar is like having access to a time machine–one that is calibrated for rural house parties and southern hoedowns that took place in the early 1900s. The man can take you on a comprehensive tour of first-generation blues artists, such as Robert Johnson, Blind Boy Fuller, Blind Blake, and Mississippi John Hurt. Eric plays authentic acoustic country blues, with all the dexterity and feeling you hear on the old recordings.

Eric is a bluesman, and not just when he has a guitar in his hands. “I feel that people who get out on stage and call themselves bluesmen should at least have experienced some sort of life that a bluesman did. That’s what it’s all about.” True to his words, in the two years he been in San Diego Eric has lived the blues, facing disabling back problems, a stolen guitar, a number of trips back and forth to the pawnshop, and a hostel eviction, leading to some days and nights on the street. Happily, Eric got his guitar back and is feeling good these days.

Eric’s life is focused on the acoustic blues, with a specific interest in the Piedmont style that developed in and around his home state of Virginia. Eric has an encyclopedic knowledge of the blues and bluesmen (and women!) and is one person in San Diego that can hold his own in a conversation with Lou Curtiss on the subject. (I heard Lou play a series of live tracks from his extensive festival collection; in each case, Eric identified the performer within a couple bars.)

Eric is equally at home picking six- and 12-string guitars, resonator or traditional, in open or standard tunings, with or without a slide. He may use a thumb pick to get some extra snap out of the strings and will even rip off a banjo tune or two when given the chance.

Out of the Hollow
Eric Freeman grew up in rural north-central Virginia, in a community known as Gid Brown Hollow. This is an area that includes parts of the Piedmont Plateau, the Shenandoah Valley, and the Blue Ridge segment of the Appalachian Mountains. It’s a racially integrated farming area, with Civil War memories still lingering. Eric grew up in a two-bedroom house with no running water and recalls the first paved road being built there in the 1980s.
Eric has childhood memories of his grandfather, Ruben Freeman, who managed property for the well-to-do Sneed family. Ruben loved to play music, but his wife would often send him outside with his guitar. (Some readers will no doubt sympathize with one or the other side of this timeless argument.) He had a National steel guitar, a “really old” Gibson, an upright bass over in the corner, and probably a banjo around somewhere.

However, it wasn’t until 1993, when Eric was 23, that he picked up a guitar himself. His cousin had a Fender dreadnought with a Strat-style headstock, like the one Johnny Cash sometimes played. The cousin used the same G-C-D chord shapes for all his songs, transposed to different keys up the neck using a capo. Eric realized there had to be more to the guitar than that, and found himself a little chord book to get himself started. He borrowed his cousin’s guitar and his records–Blind Lemon Jefferson, Mississippi John Hurt, Robert Johnson, Sonny Terry and Brownie McGhee–and listened to those records over and over until they were burned into his brain.

Eric practiced the chords from the book, matching their sounds to what he heard on the records. The F chord, notoriously difficult for beginning guitarists, was a challenge. Eric wrapped his thumb around the guitar neck and held it down and strummed until his hand got tired, and repeated that every day until it came naturally. The dedication paid off. To this day, Eric learns songs by ear and does not read music.

When learning a song, Eric will “sleep by it.” He puts it in his earphones as he goes to bed and listens as he falls asleep. The song continues to play all night, while his sleeping brain processes the tune. After repeating this for several nights, Eric knows every nuance of the song and finds it relatively easy to pick the notes out on the guitar.

To reach the next level of proficiency, Eric needed a mentor. As a child, he had met John Jackson**, a nationally known musician living nearby. Eric reintroduced himself to the older bluesman and, over the next few years, received valuable tips on mastering the finer points of specific songs.

Eric’s guitar woodshedding paid off in 2003 when he was invited to open for Piedmont player John Cephas, performing with Phil Wiggins. This gig led to a series of festival performances and workshops around the country, including in the Pacific Northwest.

2014 found him in Seattle, with 24 recorded tracks. However, he was getting tired of the gloomy weather and was ready for something new. Meeting a San Diego woman gave Eric an excuse to catch a train to the sunny south.

Here in San Diego
These days Eric has a steady job operating heavy machinery in the booming downtown high-rise construction. He’s building a music following and is working on getting a car, which will enable him to do more gigging around town.

Brendan Boyle at Folk Arts Rare Records is an Eric Freeman fan. “Eric has brought the house down every time he’s played at Folk Arts. The guy has an in-depth knowledge of many different pre-war blues styles, and he never stops learning. He also has a deep understanding of what the blues is really all about.”

Eric has played for the San Diego Folk Heritage in opening act and headliner roles, connecting with and wowing the audience each time. He has an easy, commanding stage presence and interweaves his songs with interesting material on the old blues practitioners. Eric would be a great artist to bring into San Diego’s vibrant house concert scene.

Listen Up
Eric’s favorite music was mostly recorded before he was born, but there are some artists active today that he recommends.
-Â Â  Â Taj Mahal is a cornerstone of American roots music, with a large body of guitar, banjo, and other acoustic and electric music to choose from.
-Â Â  Â Keb’ Mo’ has won three Grammys and plays “post-modern” blues.
-Â Â  Â Blind Jerron Paxton is a young LA-based musician who, like Freeman, concentrates on pre-WWII blues.
-Â Â  Â Eric Bibb is an American folk-blues guitarist now based in Europe.
-Â Â  Â Jontavious “Quon” Willis is a 20-year-old blues guitar player from Greenville, Georgia, who Eric says may be “one of the next Big Deals. He’s got a great voice, and I’m rooting for him.”

If you don’t find the Blueridge Boy in the music calendar, but you need a blues fix, you can enjoy Eric’s music online. He’s got an active YouTube channel (www.youtube.com/bunnyboyblue1) and a Facebook page, where he sometimes will post a half a dozen roughly recorded but excellently performed songs in a day.

Eric has one CD released by Ericola Records. Rattlesnakin’ Daddy has 14 tracks, just him and his guitar, featuring original and familiar tunes. “I guess you could say I’m a throwback. I almost wish I was born back in those days when those guys were coming along for the music I play.” Luckily for us, Eric has landed in our time, and–at least for now–is playing the real-deal blues in our city. You can contact Eric “the Blueridge Boy” Freeman at bunnyboyblue@gmail.com.
The Piedmont (East Coast) blues style of the Virginias and the Carolinas has a much more ragtime feel to it than the more percussive Delta and Texas-Louisiana styles. It was the first country blues that came in contact with popular music and was probably influenced by what was heard on radio and phonograph records. If you want to trace it back to slavery times, folks who came to this part of the country came mostly from the West Africa coastal regions and were among the first people brought over here. Folks from the more southern regions (Angola, South Africa) were among the last to arrive and went to the more southern and western states.
Â Â Â Â  This music brought by these peoples identifies the kinds of music (blues) they played. West African music (griots) leans toward the rag and jump narrative. Listen to Blind Arthur Blake, Pink Anderson, Rev. Gary Davis, Brownie McGhee, Buddy Moss, and Tampa Red. There is less of a drumbeat (heard in the guitar and backup) and more influenced by white popular songs, as well as more crossover from blues into the white popular songs. Piedmont music is also often lifted from old folk songs that have survived in the Appalachian regions for several hundred years, passing them back and forth from folk to folk. Kids grew up hearing these old songs at parties and dances and later on radio and TV, and they continue to get passed down.
Â Â Â Â Â Â Â Â Â Â Â Â Â  –Lou Curtiss

** Bluesman and songster John Jackson was born in the rural Blue Ridge foothill town of Woodville, Virginia in 1924. He grew up playing both banjo and guitar at house parties and gatherings in his native Rappahanock County. This soft-spoken man had an accent that harkened back to Colonial times and he was able to add a couple of phrases to every word he spoke.Â  He was one of those musicians who gave up playing in the 1930s after a violent episode and only returned to it in the early 1970s when Mississippi John Hurt played the Washington DC area and encouraged John to start playing again.
Over the oncoming years he recorded three LPs for Chris Strachwitz’s Arhoolie Label, two LPs for Rounder, and also for Alligator and Smithsonian Folkways. We brought John out to San Diego three times (twice at the San Diego State Folk Festival and once at the Adams Avenue Roots Festival). John received a National Heritage Fellowship from the National Endowment for the Arts in 1996 and continued to perform until the end of his life in 2002. Of all the great 20th-century country bluesmen John made far too few recordings than befitted his talent. Anyone who met John was captivated by him. He was not only a great entertainer but a wonderful man. I consider our friendship one of the most treasured I was fortunate enough to have.
–Lou Curtiss

Summergrass Offers Fun for All Ages, Not to Mention Top-Notch Bluegrass Music!!