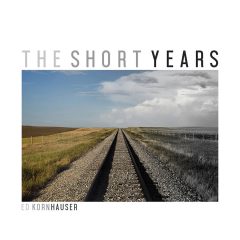 I’ve been following the career of Mr. Kornhauser with keen interest for the last ten years or so, and I remember interviewing him about this album, which had been recorded but not yet titled. He was lining up potential album release dates when the Covid-19 crisis hit, and, well, everyone knows what happened to public gatherings after that.

Several weeks ago, Ed dropped that long-awaited album by the house, and I’m happy to report that this disc is one of the best San Diego documents. First off, one could not imagine a hotter band. In addition to the piano of Ed, we’ve got the tenor saxophone of Dylan Hermansen, the double bass of Mackenzie Leighton, and the drums of Kevin Higuchi.

As a composer, Ed shows definite promise, and as a pianist, he’s one of the most consistently bright voices in our community. The album begins with “The Shuffler,” in a choppy cut-time and when the band shifts into a swing feel on the shoulders of Leigthon’s quarter-note pulse, it’s impossible not to tap one’s feet.

“Celadon” is a dreamy modal ballad that toggles between a Blue Note and an ECM feel. Hermansen has a big tenor sound and a solid grasp of the tradition, so he can morph from a honeyed glissando to weighted scream at the drop of a hat. Kornhauser follows with a lyrical essay that balances chops with emotion.

The album was recorded, mixed and mastered by Chris Hobson at the San Diego studio of Rick James on James’ pristine, vintage Steinway grand piano. It’s a wonderful instrument, and Kornhauser brings out the very best in it.

“Praxix” has a busy, Chick Corea-type vibe to it with loads of knotty unison lines featuring Leighton, who also takes a breathtaking solo over the crisp ride cymbal of Higuchi. Another highlight is Kornhauser’s original “Gashapon,” which boasts a mysterious groove that has Hermansen ripping through all registers. Higuchi keeps it all fluid without being domineering, and the leader chooses a tabula rasa approach to his solo—crafting something substantial from just a few notes initially.

Also impressive is “Dayspring,” which couldn’t help but remind me of Keith Jarrett’s “European Quartet.” That’s heavy praise in my book, but Mr. Kornhauser has earned every bit of it.

Someday, we might even be able to attend a real, in-person album release concert. I’ll be there.