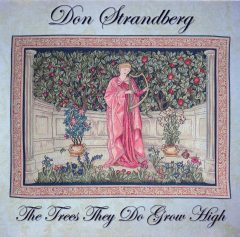 Don Strandberg performs ancient English and Celtic songs. A veteran of San Diego’s coffeehouse scene, he sings and also plays fingerstyle guitar. Fans will be pleased to learn that he has just added to his output of CDs with The Trees They Do Grow High. This collection of nine instrumental arrangements of traditional British songs–as well as one composition from the time of King Henry VIII–were chosen by Strandberg as being some of the best folk songs that Britain has to offer. His fans will certainly agree
Indeed, it is impossible to miss the “collection of greatest hits” quality of this assemblage. I’m tempted to think that Strandberg called up the K-tel folks for their advice on putting together a “best of” CD. If you’ve spent any amount of time around folk music you’ll recognize “I Sowed the Seeds of Love,” “Scarborough Fair,” “Once I Had a True Love,” as well as the others.

I’ve heard Strandberg for years and reviewed at least one of his previous disks. I’ve always appreciated the sensitivity and fluidity of his playing. These are all songs on this CD, music for the human voice, and Strandberg with his guitar playing retains the sense of breath that songs are supposed to have. All of the selections on The Trees They Do Grow High receive stately, reverential interpretations, as though they were all culled from the pages of a hymnal. All the tempos are slow to moderate. The one lively surprise on the disk is the brief recording of what I would guess to be old villagers singing “I Sowed the Seeds Of Love.” The hit and miss harmonies and half forgotten lyrics, which is most likely the way this song was sung for hundreds of years, contrast greatly with the instrumental interpretation that follows.

Strandberg mixes key signatures well. Drop D tuning has been a marvelous innovation for fingerstyle guitar, but some guitarists can use it so much that their CDs turn into tone poem odes to D major. Strandberg, thankfully, avoids this pitfall.

The sound of the guitars is less that of guitars than it is the sound of guitars going through equalizers, compressors, reverb and being amplified. I imagine that this serves a function for the recording, that this bell-like sound is the sound that Strandberg was shooting for. I’ve heard other recordings of fingerstyle guitar, many of which have this sound, so I guess it is something that folks appreciate. For me, it seems that all the effects detract from the sound of the guitar of its natural timbre. With fingerstyle guitar I’m expecting to hear at least a little bit of finger noise. All of it is gone here.

Total time of the disk is 32 minutes and 15 seconds, so The Trees They Do Grow High receives neither bonus points nor demerits. Strandberg’s fans should be pleased with this latest effort.