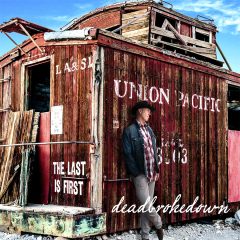 Deadbrokedown has released a new CD of original country blues, The Last Is First, which is different from the rest of the music landscape in that it is recorded with deliberately bare bones—just guitars and vocals, no drums or bass. Deadbrokedown is David Deakman, and this web-streamed project contains ten songs that play to his strengths; he is a strong singer with a rough-hewn voice that fits nicely into the minimalist arrangements and a good lyricist whose interesting stories mostly outline the realities of his hard life. For his backing crew, it is just his variously tracked electric and acoustic guitars and dobros. One song is helped out on banjo by Steve Langdon, who mixed and mastered the often-haunting, personal music.

The set kicks off with “Civil War,” and like many of the tracks it mixes tempo, with bridges that slow down the pace, and takes an extended solo guitar break as Beakman lays down a brief clinic of fingerpicking and blues technique. The lyrics are provided online and spell out the narrative, which fittingly reminds the listener of John Brown, slaver bays, and whipping posts in the days of the original Civil War, then morphs into the one we face today: “Divided and we’re torn/ Justice viewed with scorn/ An empire built on blood and bone and pain.” The vibe for the project is set, “Lifeline” is more personal, as it professes his commitment to a former lover, a midtempo ballad punctuated by dobro touches as he makes it clear he is in hard times, stumbling through life and in need of this shining beacon of support.

“Dead, Broke, Down” is introspective and sonically similar to many of the other minor chord tracks in the set; the uniformly anguished tone and lyrics, and stark instrumentation combine to weave a somber theme. This track dresses up the dreary by including an electric guitar break that is an ear-catching, fluid delight, and an interesting counterpoint to the sadness. Langdon sits in on “In the Dirt,” and this time Deakman is in again in confessional mode about his lifelong saga as a train-hopping outsider who works with and is surrounded by dirt, about how “I’ve seen fire and I’ve seen rust/ All my toil turned to dust/ But what I see is enough for me/ And I’ll die with my conscience clean.”

“Dark Light Stays” is another existential study, as he spells out his expectations—limited as those may be—where there are glimpses of hope. He has a thing for a woman cashiering at the market and is game to try a second chance, but not sure where to begin. Like elsewhere, there are slide guitar and dobro licks that almost seem to do a call and response to his tales of grim reality. The program wraps with “The Ride,” the longest tune and a revisit of the earlier themes. It is broken up with very masterful guitar interludes as he sums things up: “Sing me a sad song/ Let that guitar ring/ Gonna go down fighting/ And wait for the bell to ring.”