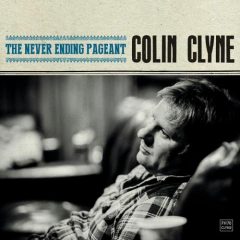 Scottish native Colin Clyne was a San Diegan for roughly a decade, ending in 2013, but what a time he had. Kick starting his lifelong dream of being a musician, he not only released three albums and built a devoted following during his stay, he won the coveted Best Acoustic Performer trophy at the San Diego Music Awards in both 2011 and 2012. Now back in his native Scotland, he has released his fourth disc, The Never Ending Pageant.

Interestingly, while in the U.S. Clyne was lauded as a Celtic artist, but at home he has been making major inroads as a country artist. The album has already made an impact, hitting #6 on the iTunes Country Chart, with the first single, “Merry Go Round,” hitting #48. It’s a strong choice for the lead-off track on the disc, with a jaunty rhythm, a nice hook in the line, “how could anyone love me,” and a killer chorus; it’s an A-side single.

The 11 songs here reflect an Americana flavor, which is especially strong on the twangy pedal steel and harmony drenched stomper “Toast the Happy Times,” but there is a refreshing variety of sound textures, rhythms, and keys to be found on TNEP. It pleases the ear and ranges from strings backed, epic ballad “Top of the Mountain” to the minimalist “My Bonny Broken Valentine,” which just features Clyne’s voice and finger-picked guitar, plus a bit of pedal steel for atmosphere. The album does rock a bit in places, notably “Playing God,” and it’s nicely counter-balanced by a melancholy ballad such as “Doin’ Fine.” That said, my favorite track is probably “This Blue Town,” a song that comes across a bit like a particularly good early Crowded House track.

TNEP is an album that reveals more with each listen. It sounds great, but beyond that it’s an excellent batch of songs that’ll make you want to hit replay. Throughout his career, Clyne has continually set the bar higher, with this album a testament to his hard work and love of song craft. Long-time fans of Clyne’s music already know this album is essential listening, but any fans of Americana, folk or country influenced sounds should also make hearing The Never Ending Pageant a priority. They won’t be disappointed.