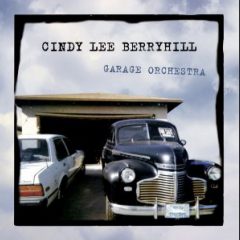 Since her debut album in 1987, Cindy Lee Berryhill has carved a niche for herself, writing and performing songs that are variously quirky and endearing, moving from genre to genre. Starting out with a playing post-punk folk music after woodshedding in New York City, she released Garage Orchestra in 1994, which is being reissued, with additional artwork notes and bonus tracks (unreviewed, but also reissued is 1995’s Straight Outta Marysville.)

The title said a lot; Berryhill gathered a nucleus of musicians and they rehearsed in a garage—and the sound does much to emulate orchestral heft. After her first two successful, stripped down discs, Berryhill used the formula that worked for the classic Beach Boys disc Pet Sounds. In addition to Berryhill and her five person backing band, there are 11 additional musicians playing strings, horns, vibes, autoharp, “trash can and board with loose screw,” palm fronds, and lots of backup vocals.

“Father of the Seventh Son” sounds like a personal memoir, if it were set to thunking guitars and the Electric Light Orchestra, serving notice that all genre bets are off. The trend continues with “I Wonder Why,” as she sings about adjusting to having lost someone, again the backing wall of sound and soaring backing vocals weave an intriguing spell. Berryhill notes in the impressive artwork that “Radio Astronomy” is inspired by her being a fan of sci-fi writers, and the arrangement includes vibes, jaw harp, and other unusual effects.

“Song for Brian” is a love letter to Brian Wilson that is a highlight; she dreamed of falling in love with him: “I know this is just a stupid song/ And you haven’t played onstage since I don’t know, but it’s been so long/ You played the melody to my heart’s rhyme.” The tune is the definition of quirky and nails the listener with its catchiness. On “UFO Suite,” vibes and the string section make the melody above pounding tom tom drums, and there is an interlude with animal noises, an ethereal choral bridge, AM and CB radio edits, and a few choruses of “Buffalo Gals.” It is over seven and a half minutes of fun.

Quieter, and more personal, is “I Want Stuff,” about the things Berryhill would have in an ideal world, like fun, not feeling dumb, and everything being okay-and how a lover makes her feel that way. Berryhill cowrote “Every Someone Tonight” with Paul Williams, her late husband and founder of Crawdaddy magazine, with lyrics from Williams referencing obscure lyrics about “I’m going to Rand McNally/ Rand McAnally’s got somewhere for someone tonight.”

The bonus material includes several instrumental tracks of tunes from the disc, along with a live version of “My Little Broken Heart” that throws back to ‘60s girl group, wall of sound epics, a song, “The Creator,” as good as most on the original album, and an outtake of “Song for Brian” with different lyrics.

This reissue of Garage Orchestra is a must have for fans of Cindy Lee Berryhill and other lovers of pop music that is off the beaten path.

DANEEN WILBURN: After All This Time

DAWN & HAWKES: The Other Side