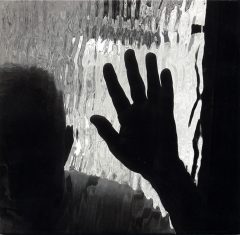 We can say that Chuck Perrin, a San Diego-based singer/songwriter, poet, and music entrepreneur, has had enough of keeping his demons entertained as he embarks with his new album, The Yearn. This is his way of getting down to the nitty gritty. His previous albums like Beat.itude (1995) and Down 2 Bone (2009) reveals a man in touch with his responses who finds melody and the graceful sway of words a way to make sense of contradictions that life presents, and allows him to study the contradictions in his own responses to the results and consequences of his adventures.

The Yearn takes a more severe tack, one that, like John Lennon’s emotional excavations in his 1973 album John Lennon/Plastic Ono Band, is to get to the core of what is truly important and what it is we remain alive for. The songs on The Yearn are starker than what I remember from Perrin’s previous work, basic structures that are superbly contextualized by a crackerjack group of musicians.Â  Perrin has had enough of the universe of personalities and media that have distracted him. This is a visceral yet beautiful album to hear unfold, a purge of things that kill the soul so that only that which makes life authentic and worth living remains.

He has in his lyrics the presence of another person, a lover, a friend, someone significant, an intimate and a confidante whom he addresses directly, person to person. There’s no hint of showboating or playing to what an audience expects. The songs structures are moody, impressionistic, fundamental constructs that are artfully embellished and given texture and color by high-caliber musicians who take a back seat no one. When matters threaten to become sing-songy, there is a sweetly blistering guitar solo from Larry Mitchell, when Perrin backs away from center stage and offers space for the redoubtable Arthur Fishers and provides a series of fleet, crystalline flute improvisations.

Track by track, the gathered musicians (including such stalwarts as Burt Turetzky and Bob Magnusson among the esteemed crew) make the simple structures into lively bits of jazz improvisation, beautifully honed impressionism, seductively rich tone poems. This is the remarkable aspect of what Chuck Perrin has accomplished, which is to create a disc that combines brutal self-assessment and the wild plunge to seek what is real and genuine regarding love at the purest level with a musical tableau that is open-ended, an improvisatory groove and tonal preferences that more than suggest that this is a life that is still evolving, progressing toward truth.

The musicians create a sound that reflects the hard turns of Perrin’s journey, but there remains the sense that all this inventory is something we can walk through, free and hopeful for a fuller life ahead. This is a remarkable album from Mr.Perrin.

FRED & THE KID: The Caged Bird