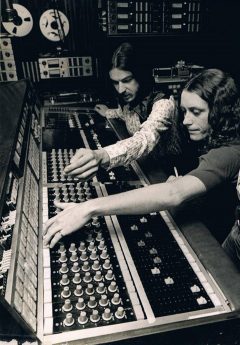 Chris Faust, right, at the mixing board, 1972, at Inter Media Sounds in Boston. 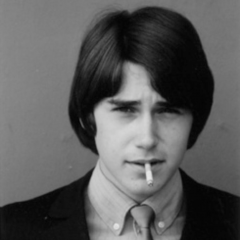 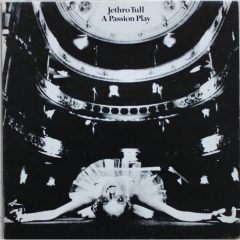 Music promoter Chris Faust is a well-known face in the San Diego music scene, having worked with numerous local bands, including Skelpin, Circa Now, Left4Dead, and Electric Mud. However, go back just about five decades and you would find Faust working in another part of the music industry–as a touring roadie and, shortly thereafter, a soundman. Having worked with various Los Angeles-area groups he would go on to be employed by a wide range of major label performers from Jethro Tull to Merle Haggard. It all kicked into high gear circa the early 1970s when Faust became a roadie for one Emitt Rhodes.

Today, Rhodes is a legendary name, a power pop icon, but at the time, he was trying to establish a solo career, following up on minor chart successes with his previous band, the Merry Go Round. Meanwhile Faust was born in Santa Monica, growing up in Los Angeles before heading to San Diego in the 1980s to “start a gypsy oriental carpet business out doors on Pacific Coast Highway in Solana Beach.” But before then, he spent years on the road with various musicians. “I was 23. I was a roadie living in Manhattan Beach, the guy who carries and sets up gear, a gofer for anything and everything and a liaison with the tech peeps at the show. When [Emitt’s manager] Russ Shaw called to ask if I could work with Emitt, I had been working with a Los Angeles three-piece band called Rockin’ Foo, with Wayne Erwin on lead vocals and guitar, Michael Racoon on keys and notably Les Brown Jr. on drums. Today, they would be called country rock. That was my first gig and I cut my teeth with them doing club shows around LA.”

Faust notes Rhodes didn’t tour per se. “We played only in the U.S. and a bit in England, with several club dates there,” Faust recalled. “It really couldn’t be called a tour, it was really several independent dates over time, here and there. After the auditions and rehearsals for the show, Emitt played the Troubadour for a six-night stand, February 19 — 24, 1971. He shared the bill with Dan Hicks and the Hot Licks. That made quite an impression on the LA glitteratti and music biz types.”

Faust was also often present in the studio with Rhodes during this time frame, including sessions for his first self-titled solo album. “Oh yes, the studio was in the garage of Emmitt’s Mom and Dad’s house,” Faust recalled. “They were Midwestern folks and were very gracious with me. He was always recording and writing. He had loads of energy. I was in that garage studio for much of the tracking for the record. It was fun for me to see the master at work. Although very young, Emitt had command of his tools and he was very exacting. His sense of time was impeccable and his pitch was excellent. What was it like to witness that as its being laid down on tape? A Blast.” While Faust was not involved in the recordings, as a friend/ roadie in the room, he did make himself useful as needed. “Sure, running wires, occasionally hitting record when Emmit was in the live room. Just helping out where I could,” he said. At one point during recording, Russ Shaw stopped by with Rod Stewart and Ronnie Wood for a brief visit.

Meanwhile, Faust’s tour duties were basic: “Putting out fires, trying to make the band as comfortable as possible, the busy work, the dirty work, the renting of gear. In England, we used SIR London. Which didn’t turn out so well.” Faust was present for Rhodes’ legendary December 19, 1971 New York show as part of Lincoln Center’s “Great Performances at Philharmonic Hall” series, with opener McKendree Springs. Others in that series included Carole King, Seals & Croft, and Miles Davis. However, what he most recalls about the concert dates is what he considered the negative side to touring England. “It was terrible,” he laughed. “It seemed to me that every club in London was located in a basement with several long runs of very narrow stairs to drag gear up and down. Ech!” Emitt’s shows were well received, but, unfortunately, things did not go smoothly with their instruments. “We rented gear at SIR London, and on the last night the show went late, so I decided to come back the next day to get the gear. I think it was three Fender twin reverbs or Fender Deluxe with 4 10″s. Anyway, when I went to get the gear the next day it was gone. Grrrr! I questioned SIR London because they had a pickup there, but they played dumb. I don’t recall who paid the bill but I’m sure it eventually came out of Emmitt’s pocket, Sorry Em!”

Faust’s tenure with Rhodes ended like it started–with a phone call from Russ Shaw. “I got a call and he sent me a ticket to Knoxville, Tennessee to work with Jethro Tull. I hit the road…” he said. He would spend the next four years with Jethro Tull, starting with the Passion Play tour, earning an album credit as a crew member with “general set-up microphones cabling” as part of his listed duties. Up next were the War Child tour and Mistral in The Gallery tour. “When I first got there, the crew had already been working together for a while, so they didn’t warm up to me much at first. Somebody asked me who I’d worked with and I happened to mention Captain Beefheart. Their ears perked up,” Faust laughed. His time with Jethro Tull yielded his only arena appearance, although no one knew it was him. “I can’t possibly remember exactly where, but I was bassist Jeffrey Hammond for the opening of a show. It was a large arena somewhere around 20,000 seats. To start the concert off several roadies came out dressed as the band.” Faust and friends mimed to a pre-recorded track and were greeted by the roar of a sold-out crowd. “I wasn’t even plugged in. My cord was cut off just to the floor, but I had Hammond’s stage costume on, the angled black and white one. The outfit was completed with his Panama hat, his black and white striped bass guitar, and hair painted on my chest with makeup.” According to Faust the stage that tour had two stage ramps that went in to the audience about 20 feet, one stage left and one stage right. “For the bit [singer] Ian [Anderson] entered downstage jumping through a flash pot. The Martin Barre character and my Hammond character ran out on the ramps and jumped into the audience as the real band members appeared on stage through flash pots.” He notes that security was ready to protect the imposters from the fans, but that still wasn’t enough to prevent trouble. “I was wearing my girlfriends rare, real pearl necklace on a thick gold chain. The pearl was salt water not cultured and was about half-inch diameter, probably worth thousands at the time. Anyway, as I hit the ground I saw an arm and a hand grab the necklace. I felt a tug and it disappeared into the audience.” Despite that theft, Faust enjoyed taking part in the skit. “Ian was always contriving “bits,” as the English call them. They were fun. They were funny and they broke the boredom and kept the show fresh. A Lotta fun.”

Merle Haggard was up next, with a slew of other artists as one nighters in the mix, including dates with Ray Charles and Aerosmith. Sadly, Faust didn’t keep any memorabilia from his roadie days. “I wasn’t into keepsakes, photos or autographs, and the like,” he said. “I knew what I was doing, who I was working with, and I was satisfied with that.” What about the clichÃ© of “sex, drugs and rock ‘n’ roll” during the original heyday of classic rock? “The rock ‘n’ roll part is a given,” he said. “However, working the Tull shows was too much hard work for drugs. But the girls? Well, that’s another story.” His life on the road came to an end due to issues outside of music. “My father turned 66 and it was time to go home and be with him and my family.”

Faust is still involved in music, but even amongst the major acts he has worked with, he considers Rhodes to be a stand-out. “Well, I can say this. It was my pleasure to work with him and I liked Emmitt very much. He had a great sense of humor and we did a lot of laughing. But still to this day I remember how hard the guy worked at his craft–really, really hard.”