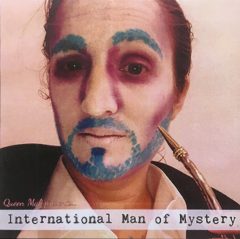 What we have here is the ten-track soundtrack to Queen Mab’s (aka Catherine Barnes) one-woman, percussion instrument-only musical, International Man of Mystery, which premiered June 24—30 at the 2018 San Diego International Fringe Festival. Many of us have relationships that don’t pan out, but few would pen a stage show around said happening. The minimalist nature of the recordings, mostly a mix of voice, vibes, and tambourine, means that the lyrics take on special significance and melody is of extra importance. To be clear, these are not show tunes in the classic sense of the phrase, but as musical performance art, they work. Barnes is a masterful percussionist but where she really shines is playing her vibes, perfectly accenting her vocal melodies, with some impressive playing in the instrumental segments and interesting counter-melodies throughout.

The songs on IMOM have plenty of “pop” in them, even as Barnes bares her soul. “How Much Longer” has a sweet early 1960s feel to it, but if there was to be a “hit” from this disc it would likely be “Can We Have Sex Now?” a song that’s quirky enough to rate a spin by Dr. Demento, while catchy enough to be an ear worm with expansive lyrics. “Wonderful Being” is basic 12-bar blues (think “Heartbreak Hotel”), but the instrumentation gives it an almost otherworldly ambience. My favorite tune here is “Derek,” which has echoes of and lyrical references to Clapton’s “Layla,” complete with a beautiful instrumental coda.

I attended one of Barnes’ performances, which saw her performing these songs live, creating percussive loops and playing intricate vibes arrangements while singing extended monologues–no easy feat. Mixed with stories, anecdotes, and humor, for fans of adventurous theater, it’s quite entertaining. Indeed, Barnes has plenty of stage presence, which brings us to the downside of soundtrack albums, especially here. While the songs here do tell the story, much is lost in the translation without all the surrounding parts of the play. Recorded at Foxtail Studios by Ernesto Garcia Jr., the packaging for the album is basic, doing a good job on recording and song info, but zilch when it comes to the story being told or details behind the recording. Even a few lines about the story would provide context from what is, after all, theater.

IMOM won’t appeal to everyone, but those who enjoy quirky sounds, minimalist jazz, performance art, outsider tunes, or simply relationship tales set to music will find this a fascinating listen, with plenty of clever wordplay. If any of the above applies to you, definitely check this out. However, if possible, also try to catch a performance of this musical by Barnes in person, where you can take in the whole story.