January 2023
Vol. 22, No. 4
Catching Up with Danny Green by Paul HormickApril 2018
Back with a Bang! Java Joe's Reunion at San Diego Folk Heritage by J.T. MoringApril 2018
Book Review: The Philosophy of Modern Song by Bob Dylan by Ted BurkeApril 2018
Rick Nash: Bass Man in Demand by Wayne RikerApril 2018
If Music Be the Food of Love, Play On: Dually Noted Pairs Fine Food and Fine Music by Paul HomiczApril 2018
Mod Revivalists the Trebels to Reunite for 40th Anniversary Show by Jim TrageserApril 2018
Harold in the Land of Jazz by Bart MendozaApril 2018
Sephardic Dance and Music by Yale StromApril 2018
Loretta Lynn: A Special Tribute to the Queen of Honky Tonk by Terry Paul RolandApril 2018
Ben Grace Gilmore: It's All About Building Community by Sandé LollisApril 2018
Advertisements 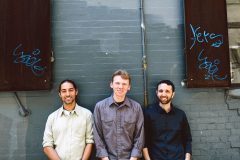 This year is turning into a big year for Danny Green. Last month the jazz pianist and educator received the Best Jazz award at the 2018 San Diego Music Awards. And the Danny Green Trio has just released their latest CD, One Day It Will (reviewed in next month’s issue).

The new disk builds on the success of the trio’s previous CD, Altered Narratives. On three of that disk’s compositions Green augmented the trio’s arrangements with a string quartet. Audiences and critics, including Downbeat magazine, praised the effort. “Recording three tracks with strings on Altered Narratives was such a gratifying experience for me. I felt compelled to take it to the next level by recording an entire album with strings,” says Green. “All of the songs on this album were initially written for the trio and the strings parts were subsequently added.” The trio’s recording was performed up in Glendale at the Tritone Recording studio, while the strings were recorded by Peter Sprague at his Spragueland studios in Encinitas.

On the new disk, the strings seem to be more integrated with the trio. Whether that is due to Green having more experience with his string composition or if the trio is more attuned to working alongside a quartet, we’ll let the musicologists quibble over such things. “I’m always working on more and different ways of incorporating the strings,” Green says. “The process for arranging each song began with my thinking about where the strings should take the lead melody, where they should play background lines or harmonies, and what else I could do to make the strings essential to the arrangement. Over time, each piece took on its own shape and in many cases, the process of arranging for strings resulted in adding entirely new sections to the compositions.”

Previous composers have mixed jazz and classical music on a grand scale. Gershwin composed “Rhapsody in Blue” for Paul Whiteman’s theater orchestra, and Porgy and Bess mixed jazz and blues in the setting of a full opera. Green is happy with what he can accomplish with the workings of a string quartet. “While a string quartet is a much more paired-down configuration than a full orchestra, what I love about it is that it can sound lush when it needs to and, alternately, it can fit right into the pocket of the rhythm section with fast paced, syncopated lines,” he says.

One thing for certain is that the Danny Green Trio is sounding more solid than ever. The trio, which includes Justin Grinell on bass and Julien Cantelm on drums, has performed together for years, which is one of the reasons this unit sounds so good. Cantelm is known for his virtuosity and also performs with guitarist Dusty Brough. Grinell teaches music at UCSD and is close to completing his doctorate. He also performs with Peter Sprague, Tripp Sprague, and Jim Plank.

Green says that the three musicians always have a good time together, both on and off the stage, and that over the years their friendships have deepened. “I think this plays a huge role in our sound as a trio,” he says.

Making a marriage of a jazz trio and a classical quartet presented challenges for Green, from the arrangements to making all the phone calls to all the musicians. “This album was a major undertaking for me both in terms of writing and arranging all of the music and in terms of coordinating everyone’s schedules,” he says.

Green assembled the quartet from local classical musicians. “I already knew Kate Hatmaker from teaching at the Coronado School for the Arts,” he says. Hatmaker has been a violinist with the San Diego Symphony since 2006 and is the cofounder and co-artistic director and executive director of Art of Elan, the San Diego-based chamber music society. Croatian-born violinist Igor Pandurski has performed with the San Diego Symphony for over 20 years. Travis Maril, one of the most serious musicians I have ever met, co-founded and co-directs the SDSU String Academy for students, ranging in age from kindergarten to high school seniors. He has performed with the Cleveland Orchestra, LA Philharmonic, Pittsburgh Symphony, and San Diego Symphony. Cellist Erica Erenyi is a frequent performer with the Old Globe and La Jolla Playhouse and a substitute for the San Diego Symphony. And if that weren’t enough. She is also a copyeditor.

The trio is launching a tour of the West and Northwest in support of One Day It Will, with dates scheduled for Portland, Seattle, and Vancouver, and East Coast and San Francisco Bay Area tours scheduled for June and July of this year. Could 2018 look any better for Danny Green? Maybe it’s just all those positive vibes from the latest disk. Green says, “One Day It Will is a positive affirmation about dreaming big and knowing that what might once seem impossible can eventually become a reality.”

Kevin Roth and the Deviant Dulcimer

Havin’ Some Fun with the Bedbreakers