January 2023
Vol. 22, No. 4
Kevin Roth and the Deviant Dulcimer by J.T. MoringApril 2018
Back with a Bang! Java Joe's Reunion at San Diego Folk Heritage by J.T. MoringApril 2018
Book Review: The Philosophy of Modern Song by Bob Dylan by Ted BurkeApril 2018
Rick Nash: Bass Man in Demand by Wayne RikerApril 2018
Mod Revivalists the Trebels to Reunite for 40th Anniversary Show by Jim TrageserApril 2018
If Music Be the Food of Love, Play On: Dually Noted Pairs Fine Food and Fine Music by Paul HomiczApril 2018
Harold in the Land of Jazz by Bart MendozaApril 2018
Sephardic Dance and Music by Yale StromApril 2018
Loretta Lynn: A Special Tribute to the Queen of Honky Tonk by Terry Paul RolandApril 2018
Ben Grace Gilmore: It's All About Building Community by Sandé LollisApril 2018
Advertisements 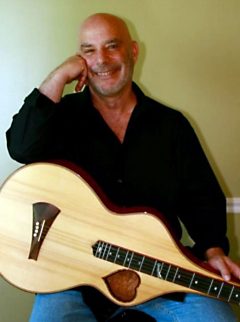 Wake-up call
What would you do if the doctors gave you a three-year prognosis? Seriously?! For most of us, this is at most an interesting thought exercise; for Kevin Roth, in 2015, it was his reality. Kevin won that round with the statistics and now lives with a new outlook on life and its possibilities. In the course of his metamorphosis, he dropped anything that wasn’t contributing to his happiness, landed in San Diego, and embraced a wealth of creative pursuits that arguably offer the highest meaning to the human condition.

Looking back
Kevin has had an enviable career in music. As a young man on the East Coast, his dulcimer skills won him a recording contract with Smithsonian/Folkways, which saw him through 12 albums in the 1970s and ’80s. He was later tapped to sing the theme song for the runaway hit PBS show Shining Time Station, featuring Thomas the Tank Engine and human cohorts that included Ringo Starr and George Carlin. That recording led to a long-lived and lucrative run as a star on the kids’ concert circuit (think Raffi) and several dozen supporting albums that carried Kevin to the new millennium.

The limitations of children’s music took its toll. Kevin claimed a brief hiatus in San Diego, then an extended stay in Florida where his music took a secondary role to a variety of non-musical activities. These wrapped up a few years ago, and Kevin recorded “one last” album before embarking on his next, as yet unimagined, adventures. The resulting recording, Awakenings, is a contemplative, minimalistic work that highlights Kevin’s rich baritone voice, his searching lyrics, and his deft dulcimer work. Noel Paul Stookey (of Peter, Paul and Mary) contributed some lyrics and guitar to the album. With that in the can, Kevin set off on a journey across the country to locate his next base of operations.

Awakenings
2015 found Kevin catching his breath with his sister in Kansas. There, a minor facial blemish quickly turned into a run-in with the medical establishment, a Stage 3 cancer diagnosis, and a re-evaluation of priorities. He attended to such matters as who would care for his dulcimers and his dappled Dachshund canine compadre Bosco. Importantly, he shed all the possessions and less tangible baggage that were not creating joy. He realized he was “put on the planet to make music and create art. My diet changed, my attitude changed, and I’m more creative and happier now than I ever before.”

Kevin’s lifelong, low-key spirituality led him led him to a Self Realization Fellowship center coincidentally located within a stone’s throw of where he was staying. The SRF provided some comfort and direction through this time and led Kevin to the teachings of Ramanananda Maharshi. These teachings emphasize non-duality, the realization that there is no distinction between the Universe and the Self. “As soon as I read his teachings, it was like: that’s it! It was similar to when I saw the dulcimer. I just knew right away that that was absolutely it.”

In the meantime, Noel Stookey, listening to Awakenings, convinced Kevin to allow him to produce the next project, dubbed Reawakening. The new songs explore similar themes to the earlier work–seeking, finding, growing, changing–and the addition of synthesizers adds more sonic depth.
At this point, the most recent test shows no cancer, and Kevin is making the most of his life in San Diego, where the sunshine and warm folks, coupled with his positive outlook, have laid an astonishing variety of opportunities at his feet.

Looking forward
It’s hard to imagine a person with more projects in the works than Kevin Roth in 2018. His spiritual rebirth, coupled with his move to San Diego, have opened him up to new experiences as well as rekindled his enthusiasm for old ones. “How can I take what I want to do and just find places to put it? Instead of locking into this or that, I’m going with my muse and finding where it fits, what little cracks are out there. I’m bringing a lot of new creative energy to each project.”

Kevin spends time each week at a Montessori elementary school, where he guides young folks in music and art, encouraging their “innovative thinking.” The students build, paint, and play cardboard dulcimers, giving tangible form to their art, stories, and imagination. The naÃ¯ve creations of the students there resonate with him. This experience has proved so rewarding that it’s inspired Kevin to pull all these activities (and more) into program he’s calling “Musical-Art.”

A dulcimer-based Musical-Art class is being made available through Bravo School of Art (www.bravoschoolofart.com) in Pt. Loma, May 19-20. Kevin also is accepting new private students that will carry on his approach to the mountain dulcimer. His goal is to help students “find out where the song lives and crawl into it.” Kevin’s move to California has reignited his passion for painting, resulting in a series of large, colorful abstracts invocative of bright California landscapes.
Kevin is also writing a memoir, describing his experiences over the years, including on- and off-stage interactions with the likes of Judy Collins, Nina Simone, and Peter, Paul, and Mary. He’s finished 10 chapters to date, which he’s pre-releasing piecemeal (along with other writings and audio and video recordings) to subscribers of his Patreon account (www.patreon.com/KevinRoth).

Rather than continue his series of contemplative “awakening” albums, he’s written (and continues to write) more upbeat, melodic tunes. He’s keeping an ear open for local musicians who can supplement his rich voice, spirited lyrics, and jangly dulcimer with some rhythmic grooves for an album with broad appeal. He’s being selective about accepting any out-of-town gigs, and starting to look for suitable local performance venues. His January show with San Diego Folk Heritage proved he can engage an unfamiliar audience and pull them into his orbit.

Kevin is also looking at drawing music to himself. He’s exploring the idea of a Deviant Dulcimer Festival that would feature non-traditional players of the instrument. As if the dulcimer is not far enough out on the fringe. Stay tuned for that!

One more symbol of Kevin’s new life is yet to be fully actualized. He has commissioned a new dulcimer from Joellen Lapidus, who famously introduced Joni Mitchell to the instrument, and built those on which such songs as “Carey” and “California” were written and recorded. It has a butterfly theme and is inspired by Kevin’s song “Metamorphosis,” which could not be more apt for his current situation. Look for it on his lap the next time you see him performing.

Kevin has always relied on his heart to direct him. At present, he is giving it lots of options and is patient in awaiting its decision on the next big thing in his life.

Further
Nobody, including Kevin, knows where his calling will take him in the coming months and years, but in the mean time you can keep track of him via Patreon or his web site KevinRothMusic.com. Watch for his upcoming album of upbeat tunes. He’ll be performing at the Sam Hinton Festival in Poway on June 2, and you are liable to find him out and about in his North Park neighborhood, always accompanied by Bosco the Weiner-Wonder Dog.

All Those Glittering Notes: The Music of Richard Thompson

Catching Up with Danny Green