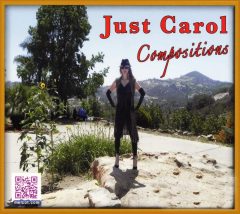 Pipe organ music has a special gravitas and grandeur that no other instrument can convey, a sound aged through the centuries in the upper reaches of stone cathedrals, with chords that can sound like an orchestra in full voice and individual keys that can capture nuance as effectively as the finest string or woodwind. Most people hear it mostly in formal settings, where it implies celebration or solemnity, as we wed and bid farewell to one another. San Diego has a unique chance to hear world class pipe organ, as the Spreckels Organ in Balboa Park is the world’s second-largest, and Carol Williams has been the Civic Organist since 2001.

Actually, it is Dr. Carol Williams, and the British-born musician has performed all over the world, composed music, and recorded many albums–as well as branching out to collaborate with jazz, pop, and rock bands. Her latest CD, Just Carol Compositions, is a fascinating trip through a musical reality rarely experienced.

The music was recorded by husband Kerry Bell, with 10 of the tracks using an organ at the Episcopal Cathedral in San Diego. Annette Gregory appears on violin on a few tracks, and there are other musical guests, but this is Williams’ show and her organ and piano dominate the short pieces (mostly two to three-and-a-half minutes long).

“Freedom, Op. 12” shows the listener what to expect, as Williams starts by laying down a lyrical melody. Then it is repeated with near-orchestral embellishment as surging chords become cello-like accents, then a buildup, and finale. “Tiger Lilly Waltz, Op. 11” is next on the program and a world away; here, the organ is an accordion, with strings for a lush background, and a 3/4 throb is behind all of it, conveyed with just one instrument.

Bell appears on “Daisy Violin, Op. 6,” giving the organ a chance to become the backing voice, a canvas on which to paint her lattices of notes, occasionally joining Williams for brief exchanges. Williams flexes her versatility with “For Michael, Op. 16” on piano as an understated waves of melody seem to break with each verse, dissolving only to softly build and break again. After “Twilight, Op. 3” amazingly mimics a full orchestra once more, “Centennial Spreckels Fanfare, Op. 14” celebrates the 2015 observation of 100 years of Balboa Park with a festive song befitting the occasion.

“Dietrich’s Dilemma, Op. 17” is a jazz-influenced number that changes things up, sounding not unlike the soundtrack to some 1940s animated short films–including sound effects. Late in the program, a surprise as Williams plays a suite for piano: “Three Thoughts, Op. 10.” Seeming in another place and time from the other music–while retaining the elegance of the rest–it is bare, simple, and almost sad. The album wraps on an inspirational note with “Divine Song, Op.15” as soprano Diane Alexander joins Williams for some powerful, triumphant moments.

Carol Williams’ Just Carol Compositions will open a new door to many who had no idea that pipe organ music was so fascinating.

CORDELIA DEGHER: Open Up to Me