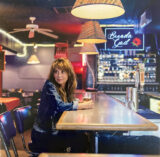 The self-titled debut album from singer/songwriter Brenda Gail, engineered and nicely mixed by Alan Sanderson at his Pacific Beat studio in San Diego, contains ten tracks of original tunes that focus on her life’s journey, experiences, and observations. Her voice is easy on the ears and pleasantly in tune throughout, anchored by a cast of veteran musicians, in particular, James East on bass, Josh Thompson on drums, Ben Hernandez on backing vocals, and Deane Cote, whose footprint is omnipresent as producer, arranger and guitarist.

Gail makes her strong vocal presence known on the opening track, “Holiday,” behind a lively “That’s Alright Mama” rockabilly groove. “Don’t need no plane…ain’t got no car…just down the street is a honky tonk bar.” The minor-key ballad “Pretty Little Flower” and “The Gift” exhibit the more tender side of Gail’s tunes that extoll metaphoric life stories.

Cote’s blistering guitar solos come front and center in “Down to None,” one of Gail’s statement rock tunes. “Sometimes you win…sometimes you lose…but never are we given the chance to choose,” and as well on the kick-ass country rocker, “Lies and Sympathy,” with Cote’s simmering guitar phrases against Gail’s vocal choruses. “Baby, baby you made me cry…I drove miles just to hear more lies.”

The pop-flavored “Another Day” raises common relationship themes. “Another day…in this life… he says I’m wrong again…that ain’t right,” and in “One More Heart,” a “cry in your beer” classic embellished by veteran pedal steel man Kevin Ryan. “Don’t go hurting me honey…don’t make me cry…don’t look away…I can see it in your eyes.”

A special moment is Gail’s mellifluous vocal duet with Johnny Valenzuela [Sleepwalkers] on the minor-key romantic ballad “Intenciones Clara,” sung entirely in Spanish. The next to last track, “Lightning,” is set against a haunting underlying bass drone behind Gail’s reflective lyrical musing. “Reaching out with no concern…that’s when my skin begins to burn.”

The closing track, “Sweet Rosalie,” set to a lilting 6/8 time feel, is a sentimental but optimistic message to a child’s future destiny in their life’s journey. “The world is a crazy place…just follow your heart.” And on that note, kudos to all involved in this project and bringing attention to Gail’s original compositions as we can look forward to hearing more material from her in the future