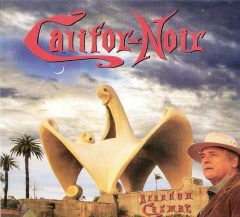 Californ-Noir is the new album by Brandon Cesmat, a dozen songs that best fit in the jazzy pop category, and a project that is more than immediately meets the eye and ear. Cesmat writes the songs (sharing credit on one), and provides all vocals, plus piano, guitar, and trombone, and the music here has a smooth gloss and breezy feel, greatly helped by local guitarist/producer extraordinaire Peter Sprague. Also playing are Duncan Moore (drums), Gunnar Biggs (bass), Danny Green (piano), and appearances by Tripp Sprague on sax and Jeff Berend on guitar.

The secret weapon here is Cesmat, who is a published poet with a day job as a CSU literature professor. Thus, no surprise that the lyrics (included) are excellent; it turns out that he is a more than capable songwriter, and one with a perfect singing voice (including some nice work on backing harmonies) to express the ideas of this concept album about the Golden State. The set gets going with “Santa Ana” about the hot desert winds, and the flames that follow-Cesmat’s wondrous way of putting it: “As palm fronds tap the power line, shower the sidewalk with sparks/ They lick their lips as if waiting for a kiss/ “You get what you deserve”/ We hear Santa Ana hiss.” Throughout, his descriptions, metaphors, and lyrical paintings are poems that float on musical wings.

“Curious Cat” is a catchy, playful jazz shuffle, with the cat in the tale, a musician who plays dives and lives a hard and dangerous life; he encounters a female who left scratches and has him counting his nine lives. A slower ballad, “Notorious,” works well because Cesmat is a good singer; it’s a relationship song with melodious bridges that lift the tune and a beautiful piano solo by Green, as he compares a love affair to scenes from old movies.

The California connections include several tracks: “Down in Baja” adds percussion and backing vocals as Cesmat sings about a light-hearted approach, “El Norte talks about the end of times/ But I see mañana down in Baja.” The title tune is the disc highlight, a love/hate ballad about California as a metaphor for a woman, above (again) lovely backing harmonies, Cesmat sings about loving—but not trusting—this woman/society. “No ice to skate in this Golden State/ We circle-eight till we collide.” Tripp Sprague’s sax break helps it score. “Mission Within” takes no prisoners in indicting the colonial scars upon the land, enslaving Indians, thieving land barons, and building temples. “To have more children than we can raise/ We steal from our brothers and give You praise.” Cesmat isn’t finished: “Leave It Alone” has a nifty R&B-inspired backing chorus, but the lyric is all business, about the theft of lands in North SD County from the indigenous people who were here first.

There are no weak tracks on Brandon Cesmat’s album, the generous program includes more California references (“Too Good to Last”) and brisk, super catchy pop in “Devil, No Doubt.” This excellent collection is a great listen sure to gain him a growing local audience.

NATHAN AND JESSIE: You’re the Star