February 2023
Vol. 22, No. 5
Blues Bash in Julian, Family Style by Frank KocherJune 2013
Jeff Beck: A Tribute by Ted BurkeJune 2013
Marcus Petronius Bashore: The Best Seat in the House by T.E. MattoxJune 2013
Pacific Wave: A Surfin’ Safari June 2013
The Winter Dance Party 1959: The Night the Music Lived by Terry RolandJune 2013
Back with a Bang! Java Joe's Reunion at San Diego Folk Heritage by J.T. MoringJune 2013
Book Review: The Philosophy of Modern Song by Bob Dylan by Ted BurkeJune 2013
Rick Nash: Bass Man in Demand by Wayne RikerJune 2013
Mod Revivalists the Trebels to Reunite for 40th Anniversary Show by Jim TrageserJune 2013
If Music Be the Food of Love, Play On: Dually Noted Pairs Fine Food and Fine Music by Paul HomiczJune 2013
Advertisements 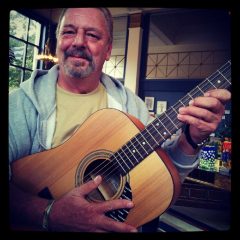 Robb Bower, producer of the Julian Blues Bash for 15 years. 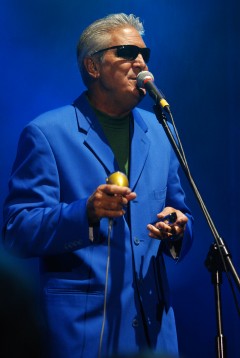 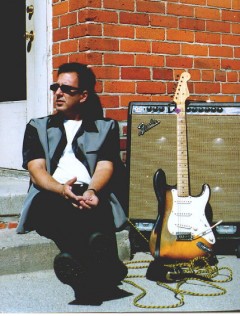 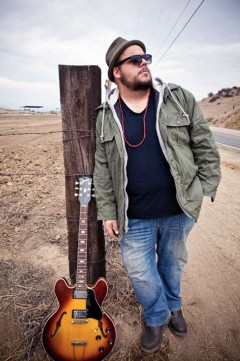 If you are in Julian and it’s mid-June, it’s time for the blues. On June 15 the Fifteenth Annual Julian Blues Bash: A Family Affair will be coming to the Menghini Winery. Producer Robb Bower’s festival will feature live entertainment by six bands with plenty of food, drink, free parking, and good times. Featured performances include Rod Piazza, Gino Matteo, Jimmy King, Randy Volin, and the Bayou Brothers Blues Review.

Bower has been producing a blues festival every year since 1999, and the thing that makes this year special is the “Family Affair” focus. The Bash’s outdoor location, in a valley behind a 100-year old winery in the midst of apple and pine trees, helps make it a great destination for all ages.

“It’s big enough to be fun, and small enough to not be too crowded,” said Bower, with an expected turnout of 1,200. “It is a great place to bring your kids.”

After 14 previous festivals, the group of 30 or so that have helped put the show together are beginning to feel like one big family as well, and the festival like an annual reunion. This is especially true for the Bower family, including his wife, three daughters, and their husbands, who all work on putting the show on, including activities like staffing a hospitality tent with comfort food for performers and festival staff.

As in past years, there will be lots of good, affordable food and drink, including barbecue from Hunter’s Steak House with a 12-foot smoker and a beer truck for cool brews. A Julian chef named Jeremy is also bringing a food truck, and the winery offers wine tasting. Comfortable chairs and small umbrellas are welcome, and sunscreen is a good idea, but no pets or coolers are allowed.

The concert will take place on two stages, with five blues bands featured on the main stage and San Diego’s Bayou Brothers Blues Review playing on a small “back porch” stage between acts, so that there will be continuous entertainment. The Bayou Brothers have a strong local following as a zydeco, blues, and R&B act, and are sure to have their blues shoes on for the Bash.

Bower’s band, Loose Gravel, will open the event. Guitarist Bower has been playing in blues bands for decades and also plays country-rock with the local McCoy Brothers band. “When we’re a blues band we’re called Loose Gravel. Every year we have a fun new name. Everyone knows when they see the funny name that it’s my band. Last year we were Big Money and the Toll Booth Bandits.”

Randy Volin and the Hard Ones are next up. Volin hails from the Detroit area and has played all over the Midwest since the ’80s, opening for acts as varied as Albert King, Stevie Ray Vaughn, and Sonny Landreth. Former guitarist for Southern California bluesman Joe Wood, he operates a vintage guitar business in Michigan. Bower describes his impressive playing as “the blues meets Joe Walsh; really different with very positive messages in his songs.”

Jimmy King’s Jamba is a new band this year featuring King, who has toured and recorded with Aunt Kizzy’s Boyz and on his own. King is a talented guitarist who has cited Peter Green of late ’60s Fleetwood Mac as an inspiration. Jamba has played at Pala Casino, Pechanga, and other Inland Empire locations.

Another blues guitarist and singer with SoCal connections is Gino Matteo from the Riverside area; he has established a reputation as an acclaimed guitarist and exceptional singer-songwriter. Touring all over the country several times as well as internationally, he has performed with BB King, Jonny Lang, Aaron Neville, and other big name artists.

“He is a master of guitar phrasing, putting the right notes together in your solo. Plus he goes wireless, so he can jump right into the crowd while he is playing a huge solo and people just go crazy,” said Bower. Matteo’s new CD, Sweet Revival, due for release on June 18.

Topping the bill is Rod Piazza and the Mighty Flyers. Harp-playing vocalist Piazza is the definition of a veteran bluesman. Starting in the mid ’60s, his playing style showed the influence of Little Walter and Piazza’s idol George “Harmonica” Smith. He paid his dues with bands like the Dirty Blues Band, recording albums as early as 1967, and another group where he shared harp duties with Smith. Besides being a busy studio player, he has played on over two dozen albums as a featured artist, many since forming his own Mighty Flyers in 1980. The Riverside native’s harp playing transcends the distinctions of “Chicago” or “West Coast” blues tags; he can play it all.

Past performers at the Blues Bash have included Rick Estrin and the Nightcats, Zac Harmon, and Jonathan Boogie Long. Bower has played at every festival and is partial to really good guitar players, being an axe man himself.

“My show is all about guitar players. I look for young and up-and-coming players that can be showcased.”

For Bower, the road that led to this festival started about 80 miles north of New York City in Poughkeepsie, New York.

“I was known as the Poughkeepsie Kid.” Like many of his generation, he was captivated by rock music. “I used to go down to the city on weekends to the Fillmore East, listening to the great bands of the time, and one evening I was lucky enough to meet Bill Graham, the promoter. He really struck me as a go-getter. About a year after that, Woodstock happened. Well, I went to the Woodstock festival and had the time of my life.”

He’s been to many other concerts since, but that was the high-water mark. “Woodstock was always in my mind.” So was the blues.

“I’ve been a musician all of my life,” Bower recalls. Starting out on trumpet and French horn and switching to guitar as a teen, he got a scholarship to a college in Iowa to study music. His involvement in concert promotion began after he came to San Diego and turned from a Southern rocker to a blues guitarist.

“There weren’t a lot of places in San Diego to play the blues at that time. It started out as a place to put my band and bring a lot of blues and a lot of people who love the blues together in San Diego.”

In getting the early Blues Bashes off the ground, he cites the help of Scott Slaga, owner of Blind Melons and Winston’s, who became a friend, along with promoter Michael Kinsman (the recently revived San Diego Blues Festival).

After three festivals, the event was outgrowing the locations, as both clubs were full and people still had tickets. It was time for a change.

“I had been contacted by some folks up in Julian who had an event at the Menghini Winery, with picnic baskets and a few bands playing in a little gazebo, but they were unable to keep that going. So I went up and talked to Tony and Mike Menghini, who are wonderful people and wonderful hosts, and we struck up a situation where I would do my festival outside at their winery.”

The beautiful valley setting has helped make the subsequent events special. “Since those first couple of years, we’ve been out in Julian and it’s been wonderful. Folks would come each year and bring their kids, because it was a great safe place to bring your kids for the day and people didn’t have to worry about them.”

The Blues Bash seems to be not only a family affair, but is thriving. People tell Bower that they bring friends and relatives from out of town, even from out of state.

“If you’ve got a good product, and people are feeling happy and not hassled, it’s a very, very laid back situation. It seems to grow every year, through the word of mouth. As I walk during the day through the concert grounds, I’ll be hugging folks and shaking hands and seeing people I know, who have been there for many consecutive years; its kind of like a huge family reunion.”

And since it’s for the blues, it is one with a worthy cause.

The 15th Annual Julian Blues Bash, June 15 from 10am to 7pm, held at the Menghini Winery, 1150 Julian Orchards Drive in Julian. Tickets are $25 in advance and $30 at the gate, with children 12 and under free; 13 to 18 years of age, only $5. For active duty or retired US Military and their spouses, with valid government ID, tickets are only $20 each at the gate.

To purchase tickets and for further information, contact www.robb-bowerpresents.com. Tickets are also available at the winery.

A Tribute to the Doors’ Ray Manzarek