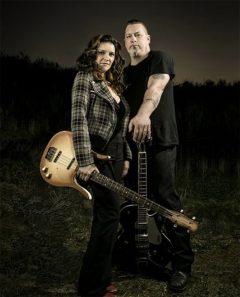 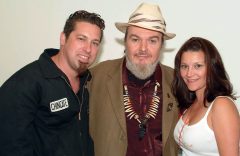 Scottie and Roxie get married by Dr. John in 2004.

I first met Scottie sometime around 1990. My band at the time, the Juke Stompers, was playing at Croce’s Top Hat in the Gaslamp every Thursday night, and Scottie was playing with San Diego’s truest blues legend Tomcat Courtney, down the street at a club called Bodies. I believe Scottie played there with Tomcat for something like two years without even getting paid; he was doing it just for the genuine experience of playing with a real deal bluesman. And when I heard that, I respected and admired his honest dedication right away. The way I actually met Scottie was that my dear friend, Brad Karow, who played drums in the Rhumboogies with me, was playing with Tomcat by 1990, and he brought Scottie over to Croce’s and introduced us one night during Tomcat’s break. I recall Scottie invited me to his new band’s first gig at his dad’s Shakey’s Pizza Restaurant in Chula Vista, and Tomcat and Brad were there for that as well.

It seems that within a year or two after that, Scott formed the Mississippi Mudsharks with Tom Essa and Mike “Sandalwood” Jones, who has been playing bass with me and Alicia for the past several years.

The Mudsharks got good real fast, and they seemed to be playing San Diego venues almost every night of the month, including every Wednesday at Croce’s, a night before the Juke Stompers’ regular Thursdays down there.

As bands go by the wayside, so did the Mudsharks after something like ten years of playing nonstop. Scottie then had the Tiki Torchers for a while, and probably some other short-lived projects that escape me at the moment, before forming Black Market III with his beautiful (inside and out) wife Roxy, sometime around 2010.

At the time, Roxy was just starting to play bass, primarily at Scottie’s urging, and she wasn’t singing much, if at all. I always thought she was a “solid” bass player, but the first incarnation of the band featured an incredibly aggressive drummer, named Haley, and between her playing and Scott’s, it could seem like Roxy wasn’t quite there with them at times. I also used to hear vocal harmonies in my head, and wished that Roxy would sing more.

Well, over the years Roxy’s playing naturally became more and more confident, although she still isn’t one to step out and “show off” her chops. She’s all about feeling the groove, the one that that she’s creating, and when I saw Black Market III at Proud Mary’s on this particular night, that groove was damn near hypnotic for the two and a half hours that the band played nonstop, without a break. And now her vocal harmonies are sublime on pretty much every song, not to mention an especially mesmerizing lead vocal performance on a song called “Walk on Fire,” written by Lady Dottie’s drummer, Steven Ray. Moreover, Roxy loves what she’s doing and what she’s sharing with Scott so much, so genuinely, that it seems to just make everyone in the audience fall in love with her!

I’ve known the drummer Alan West for something like 20 years and have always believed him to be one of the five or six greatest (literally) vintage blues and jazz drummers in the world! This is literal, not hyperbole, and no exaggeration! Alan was the drummer on Black Market III’s most recent record, Dashboard Jesus, and he played a lot of local gigs with them over the past year. I thought he was the best thing to happen to Black Market since they first started playing. Now I still believe to the bottom of my soul every word I just said about Alan West, but he was not playing with the band when I walked into Proud Mary’s tonight. The guy playing tonight was Joey Hager, whom Scott told me about, and who just went to Europe with Scott and Roxy for the past couple months. I’ll admit that I was a little dismissive of Joey at first, without ever even hearing him, just because he wasn’t Alan West. However, by the end of tonight I fell in love with him and the way he played with this band. Man, this cat’s groove, his tones, and the incredible precision of how he plays all the parts, accents, and nuances with Scott and Roxy was blowing my mind all night long! It was like a fine, 17-jewel Swiss watch, but with just three jewels!

Last but not least, there’s my sweet, dear brother Scottie, the only person who ever asked me to be Best Man at his wedding! Scott has always been one of the most dedicated, hard working, and passionate musicians I’ve ever known, and whatever success he has today, you can be certain that for the past 25 years, his entire adult life, he worked as hard for it as anyone you’ve ever known. So, when I walked into Proud Mary’s and couldn’t even find a seat in the place, and then saw an audience that wasn’t just there physically, but was as intensely gripped by each song and every guitar solo as you would find for any well-known touring band on the scene today, I felt so proud for Scott and Roxy! I felt like TONIGHT, those 25 years of that kind of constant belief, dedication, and hard work finally paid off, the way all of us “lifer” musicians dream that it will, but who mostly don’t quite have the unwavering commitment that Scottie has, yours truly included, to really achieve it.

Now that we finally got the big picture out of the way, let me narrowly focus on Scottie’s guitar playing for a moment. I always thought Scottie was an excellent guitar player, but I’m an honest cat, and after 25 years, tonight was the first time that he totally floored me, sent me over the edge and had me mesmerized song after song, for two and a half hours straight! His tone was so freakin’ great, it was like something you imagine in your head, but can never really quite get to come outta your amp! It was like something from another universe, because there ain’t nothing quite like it in this one! And Scottie’s solos were as fluid, focused, soulful, and intense as anyone’s gonna ever get with a piece of wood and six strings. He especially had me transported outside myself with his playing on “Daddy Rolling Stone” and “I Wouldn’t Treat a Dog the Way You Treated Me!”

Congratulations, brother! I believe you’re there! From my vantage point, you’ve reached the Promised Land, and I’d love nothing more than to see you and Roxy hanging out there for many, many years to come!

Since the Coronavirus pandemic hit in March, Black Market III hasn’t played any live gigs, but that by no means translated into what most would agree could have been a long-deserved vacation for the band. Since June, Scottie and Roxy have been staying up in the mountains in Phelan, California, with drummer Alan West, working almost daily on new music for their next album. Most recently they recorded and released an exceptional music video of the Tom Petty song “Swingin’.” I highly recommend checking this out on their Facebook page or website. And as if this isn’t keeping them busy and creative enough, they continue to operate their own record label, Double Barrel Records and recently formed media company, BMIII Media Management, which offers extensive media and marketing assistance to other artists. Black Market III was also booked for a three-month European tour beginning this September, which they have pretty much been doing every year for the past decade, but they decided to cancel that due to the pandemic. Meanwhile, my prediction is that when they head back across the pond next year, there’s gonna be twice as much excitement and enthusiasm from their European fans! So, all you guys over there better get your tickets for BMIII 2021 early! This train has left the station, and it ain’t slowin’ down!

Anatomy of a Folk Song: Don’t Let Your Deal Go Down