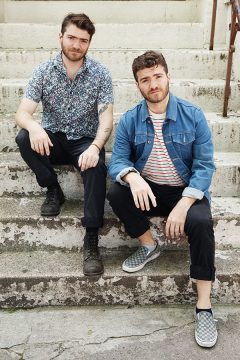 The phrase “blood harmony” is generally used to describe the sonic effect of siblings singing together, interlocking their vocal similarities to create a sensation inimitable in its natural beauty. In the case of the Brother Brothers, an aptly named indie folk duo from Brooklyn, New York, the effect is that of identical twins. And it is palpable.

Adam and David Moss have been blending their voices, with intention and without, all of their lives. However, it wasn’t until last October that the twins released a full-length album as the Brother Brothers. Titled Some People I Know, the album is a thoughtful transfer of folk tradition into a modern music community. Released on Compass Records, it has garnered critical praise from the likes of NPR who hailed “wonderful … fabulous old-time playing and sibling harmony” and Rolling Stone Country who listed the band in the Top 10 New Artists You Should Know, praising their “intimate acoustic folk anchored by butter-smooth close-harmony vocals and minimalist-yet-sophisticated arrangements.” Most commonly noted in listeners’ assessments are the band’s heartfelt songwriting, entrancing vocal delivery, and masterfully simple arrangements. The affectionate comparison to Simon & Garfunkel comes easily and frequently.

Beyond editorial enthusiasm, the Brother Brothers’ music has earned them supreme touring opportunities. They’ve traversed the U.S., Canada, and Europe extensively and joined award-winning talent on the road, including but not limited to folk supergroup I’m With Her, household name Lake Street Dive, emerging superstar Shakey Graves, and cult hero Gregory Alan Isakov, oftentimes by the personal invitation of these headlining acts.

The Brother Brothers’ acoustic project emerges from several years spent traveling the country, both separately and together, playing in varying ensembles and sometimes settling in separate cities. Though each writes his fair share of the discography independently, the brothers’ palpable fraternal bond produces a togetherness in these songs that few bands can offer.

The title, Some People I Know, refers to the resonating personal nature of these songs. As David explains, “I think every song on the album is about a person or a character, and, in a way, it is a reflection of ourselves.” Track after track, this sentiment rings true. “Mary Anne” is an encouraging ode to a friend with depression. “Banjo Song” conveys a conversation with someone who gives up playing an instrument after a hurtful breakup. “The Gambler” honors an old man who makes his living at the Atlantic City casinos.

The duo masterfully captures familiarity in human experiences; their nomadic background makes that no surprise. “Adam and I are definitely the kind of people that have trouble staying in,” says David. “We love surrounding ourselves with people who make us feel good, and grow. That’s part of the beauty of living in New York and living in Austin and Boston and traveling the country—wherever you go, you’ve got friends and people who really shine and help you shine a little brighter.”
David has bartended in the Red Hook neighborhood of Brooklyn for six years, seeing first-hand his regular customers and friends being priced out of the area.

The disheartening change inspired “Frankie,” a song in which a close-knit community slowly shrinks as a result of growing greed outside its control. The song’s powerful chorus makes a memorable statement true to folk tradition.
Although young men, the Brother Brothers have boasted this sterling folk sound for decades. Growing up in Peoria, Illinois, they sang along as children to their father’s record collection, which included the Kingston Trio, the Everly Brothers, the Beatles, and the Beach Boys. “That’s where we learned to sing harmony and then one thing led to another,” says Adam. “All of a sudden we could harmonize to anything we wanted to. It was a very natural progression.”

After earning music degrees at the University of Illinois in Urbana-Champaign, the brothers set off on separate musical journeys. Adam traded in the viola for a fiddle and joined Green Mountain Grass, Austin’s premier gonzograss band. David spent a short stint in Chicago, then moved to Austin and formed a progressive folk group called The Blue Hit.

Once in Austin, David discovered the music of such Texas songwriters as Townes Van Zandt and Blaze Foley and began writing songs shortly thereafter. In 2011, he entered (and won) the Newfolk songwriting competition at Kerrville Folk Festival. “Going to the folk festival each year has been a constant source of new friends and some of the purest inspiration we’ve ever known,” says Adam, who went on to talk about the value of artists as friends and the creative influence they can have on you.

From Austin, Adam moved to Boston, where he busked in the subway in order to hone his talent as a fiddler. After a couple of years, the twins reunited in Brooklyn, where the Brother Brothers project was finally born. Before long, they accepted invitations to open tours with Sarah Jarosz and Lake Street Dive. They released an independent EP, Tugboats, in 2017, followed by a national tour with I’m With Her in 2018.

Speaking about their live shows, Adam says, “I feel like there’s definitely a living room vibe. Most of our experience before we were performing as a duo was, you know, sitting around song circles with friends, playing and creating a very homey, small-room environment.”

That sense of familiarity has served the siblings well on Some People I Know. After going on tour with Anaïs Mitchell’s stage production of Hadestown, David wrote “Colorado” to pay homage to friendships made on the road, brief as they may have been. Adam wrote the lively fiddle tune “In the Nighttime” in order to attract passersby in the Boston subway. By using a different microphone set-up, the track stands out on Some People I Know—and not just because of the yodeling.

As the record returns to a gentle pace, “Red and Gold” harkens back to Simon & Garfunkel, while “Ocean’s Daughter” (written with Rosie Tucker) meshes the duo’s sound with klezmer music. The portrayal of a doomed relationship in Peter Rowan’s “Paper Bride” is perhaps the album’s most cinematic moment. Quietly closing the album, Buck Meek’s “Sam Bridges” is a beautifully told tale of the vagabond, and “Goodbye Old Silver” is poetic gratitude paid to seasons’ change.
The Brother Brothers recorded Some People I Know at Mark Ettinger’s Lethe Lounge in New York City with producer Robin Macmillan and engineer Jefferson Hamer. While the songs capably capture a modern snapshot of their surroundings, the album itself retains a timeless feel—something the brothers intentionally accomplished.

“I just want people to listen to it once and then listen to it again,” David says of the album. “And every time they listen to it, I want them to find something new and in some way relate it to themselves. Whether they’re listening to it today or in 40 years, I hope it will make them feel just the same.”

Putumayo: Bringing Home the Music of the World for 26 Years