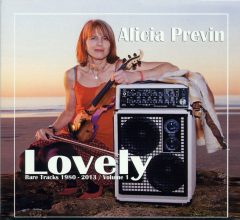 Alicia Previn has quite a back story. The daughter of a knight who has conducted major symphony orchestras, including the London Symphony (Andre Previn KBE) and American jazz singer Betty Bennett, who sang for Benny Goodman. She trained on violin as a child, and later was a member of several bands in the ‘70s; by the early ‘80s she was appearing as a studio musician on projects in Europe and on both American coasts. She continues to play in bands in SoCal, like True Stories with Bart Mendoza, in addition to being an author of children’s books.

Her new release is Lovely — Rare Tracks 1980-2013/ Vol. 1, and it is described as “ten long lost vintage studio demos recorded… between 1983 and 1988.” Though the artwork apologizes for the sound quality, it really isn’t that bad. The songs are all Previn originals and feature her singing and playing, and the ’80s recording techniques (synth drums, at times saturating keyboards) are mostly just artifacts of the New Wave influences of the time.

“Lone Ranger (Angel by My Side)” starts off, with an arrangement that didn’t work back in the day and doesn’t now; melding tricky, jazzy chord bridges with Previn’s straightforward vocal talents results in the peppy song, too often going off the rails. Things are much better on “SakÃ© Sunset,” which is more in her vocal wheelhouse, as she drinks to love and the “fading sunshine.”

A song with a very different and arresting hook, “World of Men,” works well as Previn is sings an unusual minor chord riff with a dark vibe, about “As I go out into a world of men, not prepared to fight/ I take my life into my hands to see what I can make it.” Flute and violin fills help sustain the feel of this highlight. “Without Your Love” is a big production, packed with backing vocalists, a wall of layered sound, and plenty of reverb, this one sounds like the Fleetwood Mac-influenced catchy fare that filled albums in the late ’80s. Overproduced fluff by today’s standards, maybe, it is also better than most of the music that today’s standards seem to be cranking out.

Previn does a great job on “Dance of Life,” with a powerful vocal and aggressive violin, giving it an edge that helps it works as a dance song–there seems to be a Tina Turner influence at the base of this tune, though it makes a great case for its own identity as song with a beat.

After “Alive and Real” misfires rather badly, the set wraps with two strong efforts: the instrumental “Native” has exotic droning power, in a Bolero mode that launches some restrained keyboard and violin exploration, then Previn’s best vocal work highlights “Sons and Fathers.” A lush arrangement works well here, and as her song is a celebration of life, with flutes joining violin and backing vocals, “In the land of the sons and the fathers/ From the blending of fire, air and waters/ Patient mothers and triumphant daughters/ Come our lives”.

This Alicia Previn collection isn’t new, but it is still entertaining.