January 2023
Vol. 22, No. 4
A Chance Discovery Illuminates John Coltrane’s Search for Unity by Robert BushSeptember 2018
Back with a Bang! Java Joe's Reunion at San Diego Folk Heritage by J.T. MoringSeptember 2018
Book Review: The Philosophy of Modern Song by Bob Dylan by Ted BurkeSeptember 2018
Rick Nash: Bass Man in Demand by Wayne RikerSeptember 2018
Mod Revivalists the Trebels to Reunite for 40th Anniversary Show by Jim TrageserSeptember 2018
If Music Be the Food of Love, Play On: Dually Noted Pairs Fine Food and Fine Music by Paul HomiczSeptember 2018
Harold in the Land of Jazz by Bart MendozaSeptember 2018
Sephardic Dance and Music by Yale StromSeptember 2018
Loretta Lynn: A Special Tribute to the Queen of Honky Tonk by Terry Paul RolandSeptember 2018
Ben Grace Gilmore: It's All About Building Community by Sandé LollisSeptember 2018
Advertisements 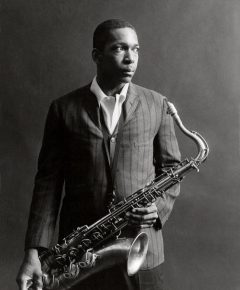 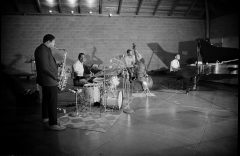 Coltrane with his group. Photo by Jim Marshall. 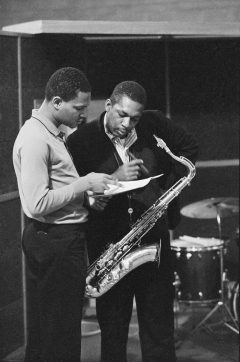 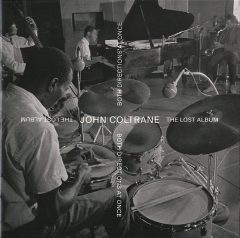 Developing an appreciation for the music of John Coltrane is almost a requirement for all serious musicians, students, historians, and fans alike.

My contention is that this practice represents the ultimate reward in and of itself. Coming to terms with ‘Trane’s enormous contribution should not feel like work; rather, it is an enduring joy and, literally, the gift that keeps on giving.

I’ve been involved in this pursuit the entirety of my adult life, and Coltrane is always on my iPod, so when I got word that studio tapes from the “classic quartet” (from 1963, no less) had surfaced, I couldn’t have been more excited.

There has been a mountain of hype accompanying this discovery–but in 2018, “lost” Coltrane studio tapes present a gigantic mitigating factor that clearly outweighs all other possible motives.
Saxophone colossus Sonny Rollins says it’s like finding a new room in the Great Pyramid–and he should know, as one of Coltrane’s only surviving peers. I’ve heard various reactions from other critics that tend to downplay the ultimate significance of Both Directions at Once: The Lost Album, but I’m not one of them, and before I get into the music itself, I’ll tell you why.

To me this is the equivalent of discovering a previously unknown play by William Shakespeare. Would it matter that it leaned closer to the brilliance of “Macbeth” or a lesser work like “Love’s Labor Lost?” I don’t think so; the mere existence of these tapes justifies whatever hype the record company can muster. Previously unreleased studio Coltrane tapes are the musical Ark of the Covenant.

In 1963, there was no group operating in jazz with more explosive and spiritual gravitas than the Coltrane unit, assembled through trial and error from the deepest improvisers on the scene. Coltrane sifted through several piano players before he found in young McCoy Tyner (22 at the time) the perfect harmonic foil. ‘Trane’s search for the appropriate drummer was even more exacting and excruciating to everyone involved. He knew all along that Elvin Jones was his man, but Jones’s reputation as a heroin addict (Coltrane had cleaned his own act up three years earlier) frightened him. So, in quick succession, he hired and let go Pete LaRoca and Billy Higgins, two of the finest drummers in music. Elvin, however, was what Coltrane needed, and once he came on board, things began to gel.

That left just the bass chair to be permanently settled. People often forget that Coltrane scored his first big “hit” (a 13-minute version of “My Favorite Things” on Atlantic Records) with Philadelphia bassist Steve Davis, soon replaced by a young Reggie Workman who stayed until Jimmy Garrison emerged as another perfect fit.

By 1963, the band was nearing a long and productive apex that would last another three years. Both Directions at Once: The Lost Album was recorded on March 6, one day before the band would reassemble in the New Jersey studio of Rudy Van Gelder, joining vocalist Johnny Hartman for the unforgettable John Coltrane and Johnny Hartman, and would make their next statement as a group with Live at Birdland, recorded in October and November of that action-packed year.

The Coltrane group was also busy headlining Birdland the week of March 6, so this session was recorded during the daylight hours, allowing the group to hightail it back to New York City to make the live gig happen.

There has been some debate as to whether this session was ever intended to be the basis for a dedicated album. This seems to me to be beside the point. There is certainly enough material to create a record, who can say whether the notoriously self-conscious musician would have ultimately approved its release during his tragically limited time on the planet (John Coltrane died of liver cancer on July 17, 1967 at the age of 41.)

More to the point is the music they created on that day. I’m not sure it would have all ended up on the same record (the record label, Impulse, inexplicably erased all unreleased session tapes to reduce storage costs in the 1970s)–that’s not a question that can be answered. Coltrane handed his own personal copy of the session to his first wife, Naima, shortly before they separated later that year. Her family found the tapes and thus the “lost” album became found.

Both Directions at Once: The Lost Album
The album begins with “Untitled Original (11383),” which features Coltrane’s sinewy soprano in a classic minor blues form, driving the group with jagged intensity. McCoy Tyner’s solo seems almost spring-loaded–filled with crisp, deft commentary. This rhythm section is always a marvel. Jimmy Garrison’s sound is deep and woody, and Elvin’s ride cymbal is relentless and quite wicked. Garrison takes an arco bass solo in time that seems particularly indebted to Paul Chambers. This tune would fit comfortably in either the blue Coltrane album from 1962 or Live at Birdland from later in the year. Vintage Coltrane.

A kind of strange version of “Nature Boy” follows; it’s very short and compact and it depends almost exclusively on a Jimmy Garrison groove/vamp that really focuses on the bottom end. Coltrane doesn’t really solo and the piece seems like an experiment that didn’t really pan out. I don’t imagine this would have been released except as an outtake on a posthumous document.
Coltrane had explored the Latin-to-swing juxtaposition many times (think of “Night Has a Thousand Eyes” from Coltrane’s Sound.) In “Untitled Original (11386)” ‘Trane returns to the soprano to jostle with Jones, whose contribution could be described as obstreperous in the most complimentary way. It’s a very catchy tune, and I could easily imagine it as a regular feature in the Coltrane repertoire. Tyner is in excellent form, but an attempted bass/drum dialog at the end comes across as sloppy. Perhaps another take on a different day would have yielded a superior result, but one of the things that I love about this record is how it exposes the process. In this case, the process is more important than the final result.

A different version of “Vilia” exists elsewhere, on an Impulse compilation disc, but the interpretation on Both Directions at Once: The Lost Album with ‘Trane on tenor is vintage Coltrane at the height of his powers, even if the composition is, relatively speaking, rather lightweight. This is the most “traditional” sounding piece on the album, and it would fit very nicely on The John Coltrane Quartet Plays, circa 1965.

Returning to the concept of process, another reason this release proves to be priceless is in the four separate versions of “Impressions.” It is important to note that what Coltrane was playing live at any given moment was always a year or so ahead of whatever his recorded output would have been. Coltrane’s contract with Impulse Records especially seemed to be initially sluggish. At the time Both Directions at Once: The Lost Album was recorded, only ‘Trane’s first session for the label, Africa Brass, had been released. Although the live 1961 date Impressions had been recorded at the Village Vanguard, it would not see its release until July of ’63. That version constituted 15 minutes of very loose improvisation. All four versions of “Impressions” on this disc are under five minutes long. They are considerably “tighter” and they feature two versions where Tyner lays out completely. Listening to the evolution of the “Impressions” idea is nothing short of fascinating as each version details significant differences. It’s worth the price of the extended deluxe edition of Both Directions at Once: The Lost Album.

The version chosen for Disc 1 leaps out of the speakers at a blistering tempo. There’s no Tyner, and that seems like a prescient choice–of the four distinct versions on the double album, the two where Tyner lays out seem like the closest to realizing ‘Trane’s intention. Garrison is really holding things down–as stalwart as a well-built fortress against the sonic onslaught of Jones and Coltrane. ‘Trane’s virtually limitless palette of ideas holds up to close scrutiny. Each subsequent version of “Impressions” contains its own set of themes and avenues for extended development, and yet one can hear unifying threads that date back to his solo on the Miles Davis antecedent tune “So What,” from the epochal Kind of Blue.

The penultimate selection, “Slow Blues,” is perhaps the most accurately titled piece in the Coltrane canon. It proceeds in gloriously languid fashion, with an almost burlesque feel from ‘Trane’s tenor, the meaty low tones of Garrison’s bass and the pinpoint precision of Jones’s ride cymbal. If the blues represents every jazz man’s freedom to adhere or deviate from the concept of clichÃ©, then Coltrane manages to argue both ends of that proposition in his lengthy solo, which transforms what could be trite in the hands of others into a deeper, more meaningful set of observations on the human condition. Tyner finally enters at the 6:00 minute mark–and he practically tattoos a remarkable doctoral thesis on the keys of the Van Gelder Steinway. It’s all raw, all grit, all blues.

Which brings us to the main disc closer, “One Up, One Down,” a fragmented melody built on an augmented triad. This is a classic example of where the Coltrane group was headed in the next few years–melodies based on scale partials or cells and an extreme emphasis placed upon the drums as a melodic force in and of itself. Jones and Coltrane trade eights for an extended period of time, leading ultimately to excellent, extended solos from bass and drums. It’s a tour de force, for sure, and the harbinger of future albums like Sunship and One Down, One Up (Live at the Half Note).

So, in closing, is Both Directions at Once: The Lost Album worthy of the hype? Absolutely. We may never come upon another unreleased Coltrane studio session of this quality, and the world can always learn something from Coltrane’s relentless quest for unity in his music.

Does it deserve mention alongside milestones like Giant Steps, Crescent, or A Love Supreme? No, but it is a wonderful glimpse into a single day in the evolution of the finest working group the jazz world has ever known. That’s more than enough for me.

One final thought: all of this and so much more of the many posthumous releases in the Coltrane catalog is only possible because of the wisdom, vision and courage of Coltrane’s Impulse producer Bob Thiele, who made sure the bandleader had access to the Van Gelder recording studio whenever he felt like recording, even though his contract called for just two albums a year. Label executives at the time howled in displeasure–perhaps the most myopic “business” posture ever. Kudos to Thiele for standing his ground when he had to and coming up with other creative solutions when all else failed.

A Glorious Day of Blues by the Bay: The San Diego Blues Festival