January 2023
Vol. 22, No. 4
FIDDLE CAMP: Fun for All! by Dwight WordenFebruary 2015
Back with a Bang! Java Joe's Reunion at San Diego Folk Heritage by J.T. MoringFebruary 2015
Book Review: The Philosophy of Modern Song by Bob Dylan by Ted BurkeFebruary 2015
Rick Nash: Bass Man in Demand by Wayne RikerFebruary 2015
If Music Be the Food of Love, Play On: Dually Noted Pairs Fine Food and Fine Music by Paul HomiczFebruary 2015
Mod Revivalists the Trebels to Reunite for 40th Anniversary Show by Jim TrageserFebruary 2015
Harold in the Land of Jazz by Bart MendozaFebruary 2015
Sephardic Dance and Music by Yale StromFebruary 2015
Loretta Lynn: A Special Tribute to the Queen of Honky Tonk by Terry Paul RolandFebruary 2015
Ben Grace Gilmore: It's All About Building Community by Sandé LollisFebruary 2015
Advertisements

The Julian Family Fiddle Camp is held every April near Julian. 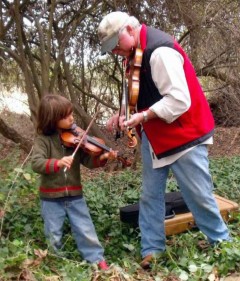 Avery Ellisman and his son Ezra

The Julian Family Fiddle Camp is a gem in the crown of San Diego’s many music opportunities. Held every year in April in the mountains outside Julian at beautiful Camp Cedar Glen, the camp brings young and old together for a series of music classes, evening concerts, dances, jam sessions, and great family fun.

Acclaimed bluegrass and classical violinist Mark O’Connor was the first to host a fiddle camp in San Diego. (See the July 2004 issue of the San Diego Troubadour: https://sandiegotroubadour.com/wp-content/pdf/2004_7_Jul.pdf). Attendees were housed in a local hotel or attended as day students if they lived in the area. The popular O’Connor Fiddle Camp was held each summer at Pt. Loma Nazarene University until Mark moved from San Diego to New York at which point the camp was closed. For several years thereafter San Diego had no fiddle camp until local musician Avery Ellisman, decided to start one in 2011.

Avery had three young kids at the time, all interested in fiddle music, and he wanted them to enjoy the fun and camaraderie of a fiddle camp experience. Avery and his eldest daughter, Shira, had recently been to a fiddle camp in Montana and found the experience both fun and rewarding.

Avery and his kids had also spent many happy sessions at the Amos and Emma Radcliffe Sunday jam sessions that were held for many years at the Radcliffe home in Clairemont until Amos passed away and Emma moved to Minnesota. Without the O’Connor Camp or the Radcliffe jam sessions, Avery felt the loss of musical opportunities that had become a big part of his life.

Avery has, and still does, play in local bands. He is the fiddle, mandolin, and occasional banjo player in the respected local band Prairie Sky. In addition to his performing, Avery is a published composer and a sought-after fiddle competition judge (he has been a judge at nearly every fiddle competition held in California).

Avery’s musical experience is not limited to California or San Diego. For ten years Avery lived in Israel where, by day, he directed the area’s research activities for General Motors and, by night, performed with a popular country band called Smokin’ Gun. Avery reports that, while his formal studies were in philosophy and social work, he has played music since childhood and, while his musical activity has “waxed and waned” over the years, playing music has been a “touchstone” that invariably brings him happiness.

With this kind of background and belief in the rewards of playing music with people, Avery’s dream of creating a local fiddle camp began to take shape. He set out to recreate an opportunity for both young and old to not only learn to play acoustic music but to interact with others of all ages through music as well.

The first step toward making his dream a reality was to find the right location. Avery explored the area and finally settled on Camp Cedar Glen, a family retreat center near Julian and adjacent to the Volcan Mountain Wilderness Preserve.Â  The Camp has an area for RV and tent camping, on-site dormitories, a dining hall, classrooms, archery, swimming pool, hiking, and other amenities to accommodate musicians as well as non-musical family members. All this is packaged in a woodsy, yet accessible, environment.

Pulling together the first year camp program in 2011 was a big risk for Avery, as he committed a considerable amount to fund the venture, as well as hundreds of hours of time — all without knowing for sure if anyone would even come. He designed that first-year camp experience so that it would offer outstanding instruction on fiddle and mandolin with several top-notch teachers and complemented the core curriculum with lots of fun interactive opportunities.

Anchoring the first-year faculty on fiddle was the outstanding Canadian fiddler, Calvin Volrath, a true icon in the North American fiddling world. While Calvin led the fiddle instruction for intermediate and advanced students; local violinist and instructor Jane Frey was on board to lead instruction for the less-advanced students. As for mandolin, Evan Marshall, an acclaimed mandolin player and entertainer, taught mandolin with support from performing artist Scott Gates. Faculty concerts were presented each evening, with informal jam sessions into the wee hours, and on-site dances with good old-time music provided by student performers.

People did come to the first camp and the first-year event was a resounding success. The camp has grown every year since and enters its fifth year in 2015.

As the camp has grown, instructional opportunities have expanded, with this year’s instruction including a variety of fiddling styles including Texas-style, Celtic, jazz, and bluegrass fiddling; bluegrass and swing mandolin; old-time banjo; flat-pick bluegrass guitar and Texas-style backup guitar.

There will also be workshops for those interested in improving their skills on the upright bass, learning Appalachian flatfoot dance, and learning to play the mountain dulcimer. Avery works hard to find and secure top-notch instructors who are not only great on their instruments, but have the ability to develop and provide a class experience that reaches and teaches students of all ages and ability levels.

For many families and individuals, attendance at the annual Julian Family Fiddle Camp has become an important part of their annual life cycle. Camp attendees range in age from six to 86, all interacting based on their skill level and interests rather than age. As a result, it’s not unusual for an elementary school kid to be sitting, learning, and playing music in a class while seated next to a retired lawyer!

Friendships are formed not only around the music but also in the dining hall, in the jam sessions, at the dances, and in the other activities. Music is the glue that binds attendees throughout their entire stay at camp.

For many, this kind of interactive experience, face to face, with acoustic instruments and without TV and computers is refreshing and rewarding, especially compared to the type of impersonal interactions that have come to dominate “real” life through Facebook, Twitter, and other electronic interactions.

Avery also made it a point to integrate his camp experience into the local Julian Community. Many of the local merchants support the camp with goods and services (including MOM’S Pies and the Julian Pie Company)!

Avery not only encourages fiddle camp attendees to visit and enjoy what Julian merchants have to offer in town, he also initiated what is now known as the Julian Flash Jam. This once-a-year event occurs on the last day of the fiddle camp.

By sending out advance notice, the Flash Jam attracts hundreds of musicians and onlookers up to Julian who all converge at one spot at the same time and, upon cue, play three well-known tunes on acoustic stringed instruments. It’s pretty stunning to see and hear over 250 instrumentalists stand in front of Julian’s Town Hall and suddenly break into the fiddle tune “Old Joe Clark.” This year’s Julian Flash Jam will be held on Sunday, April 12 at 2pm.

In response to his effort, the town of Julian is noticeably proud and welcoming to Avery and his Julian Family Fiddle Camp, because he has done much to help the town become known as warm and receptive to acoustic musicians and traditional music. In fact, in addition to creating the Julian Family Fiddle Camp and the Flash Jam, Avery was the driving force behind the resurrection of the annual Julian Fiddle Contest which, while enjoying a 40-year history, had ceased production by the Julian Lions Club some six years ago.

With the respect and goodwill he developed via the fiddle camp, and his long-standing participation and membership in the California State Old Time Fiddlers Association, Avery made key introductions, engaged the Julian Chamber of Commerce, and the Julian Fiddle and Pickin’ Contest was reborn. Now held at the end of May in the old Julian Town Hall, the revived contest proved a huge draw last May for fiddlers from all over; its production is in full swing for the 2015 contest, which will be held on May 30th. You can learn about the upcoming contest at: www.sandiegofiddler.org/fiddlepickincontest

Avery believes that peoples’ lives and sense of well-being can be profoundly and positively altered through music. The Julian Family Fiddle Camp is his effort to create an opportunity for positive interactions to flourish. The success of the camp speaks loudly of his success in that regard. One need only see the smiles of joy on the faces of shy youngsters hearing applause for their first fiddle performance, or chat with an adult who may be recovering from a divorce or family loss to understand just how well camp experience makes folks feel better.
Maybe a trend will start — back to human interactions with acoustic unamplified music as a catalyst? Who knows? Whatever the bigger picture, San Diego is the lucky beneficiary of Avery’s vision and hard work — work that allows all of us to enjoy a great camp experience for five days every April, or to come in for an evening to hear one of the outstanding faculty concerts that are open to the public.

For more information about the camp visit: www. Familyfiddlecamp.com