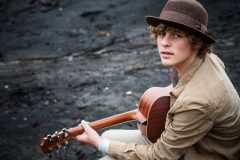 San Diego’s music community has seen many talented musicians emerge over the past few years, but nothing compares to what’s going on with 16-year-old Cody Lovaas.

At a time when acts big and small are having a hard time filling seats, Lovaas has emerged as a major talent. A quick scan of the audience outside his performances show a cross-generational attraction: jaded scene veterans get it and, to paraphrase Willie Dixon, the flocks of teenage girls understand.

Lovaas is a gifted singer-songwriter and has begun to draw national attention. Sometimes he plays solo, sometimes with a band, sometimes with guitarist Pedro Talarico. At a point where the average musician is trying to figure a way to take their music outside of the family garage, Lovaas has landed a major management deal with legendary music man Bill Silva as well as mentorship from hit-maker Jason Mraz. He has become a major local draw, selling out concerts and playing festivals such as the Switchfoot Bro-Am, in addition to appearing on programs such as Tonight in San Diego. He’s released three demo EPs. He is endorsed by Taylor Guitars. He won the 2014 San Diego Music Award for Best New Artist. At 16, Lovaas is the youngest performer to ever claim that particular trophy. It’s an impressive start to a very promising music career.

Lovaas was in his element last month when he performed at the Carlsbad Village Theatre, with a band that included guitarist Talarico, bassist Kevin Freeby, drummer/ percussionist Angela Cuitrone, and violinist/vocalist Caitlin Evanson. It’s a venue he’s sold out before, with his most recent recording being a live album of a show there, recorded on August 30, 2014 and available via the Belly Up Tavern’s website.

Born in Dallas on June 15, 1998, the same date as his father, Lovaas arrived in Carlsbad at the age of one. Music has been a driving force for him since the very beginning. He ended up as a guitar player by way of a parental nudge — Lovaas initially wanted to play percussion. “I remember sitting in the backseat of our car as my mom was driving when I asked, “Mom, can I play the drums?” She quickly replied, “Yes, but I think you need to master another instrument first, Cody.” At seven years old, I didn’t know of any other instruments, so I asked for her help. She told me, “You can bring the guitar to the beach… and the girls like it too!” At that point, I was all in.”

Once the guitar was decided upon, Lovaas found inspiration in simply playing. “I think after I picked up the guitar, I fell in love with the feeling of getting better at something and overcoming challenges,” he said. “Different obstacles and opportunities have [driven] me to work hard and achieve goals. Once I could really play the guitar, I was inspired by other musicians like Jason Mraz, John Mayer, Jack Johnson, Donavon Frankenreiter, Ray LaMontagne, Amos Lee, and that list is continually growing.”

While it’s natural for a young man of his age to be influenced by the musicians of today, Lovaas also has a voracious appetite for what came before. “I want to know as much about music as my brain can possibly hold,” he remarked. “It’s what I love to do and I am always learning and always trying new things with it. This is one of the aspects of music that is so fascinating to me: no matter how hard I work, how many songs and musicians I listen to, how many years I study, there is no way I can learn even a fraction of what I would like to learn about music.”

Lovaas now plays the guitar and ukulele and is currently learning to play lap steel, the mandolin, drums, and percussion. “It takes a lot of time and dedication to become good at an instrument and it’s cool to know there is always room for improvement and always more to learn. I have had a few different teachers and for me it is super important to have fun with music. [In fact] I think that’s why they call it ‘playing music.’” I also teach one student, so I can learn through teaching music.”

Beyond the fellow musicians and family, it’s clear that Lovaas’ surroundings also help shape the songs he sings. “I live in Carlsbad. [It’s] a great place to grow up. The community is super supportive and always has been to me.” It’s Carlsbad’s waterfront location he enjoys the most. “I love living close to the ocean,” he enthused. “Surf and the ocean are my greatest passion next to music. Surfing and music are one to me. Since I home school, I often get up before dawn and paddle out in the dark and wait for the sunrise. It is a surreal moment and gives me the best time to reflect on life and the extraordinary opportunities that have come my way. The water always humbles me. It reminds me how small we all are and how quick great things pass by,” he said.

That humble, modest personality has kept Lovaas grounded. “My buddies are still buddies and I am proud to say that they don’t treat me any different than they did before,” he said. “I’m stoked I’ve been able to maintain some great relationships. If my friends have a chance to make one of my shows they do, just like I try to make their sporting event or whatever else they are involved with.”

His San Diego Music Award is kept on his desk. “I never aspired for awards or recognition,” he mused. ”But honestly it feels great to be recognized for something I put so many hours into and take very seriously.” Lovaas’ endorsement by Taylor Guitars, which included a performance in the guitar maker’s showroom at the 2014 NAMM Convention, is also a major accomplishment. “I feel so lucky that I have gotten to know Mr. Taylor and the rest of the crew,” Lovaas said. “Taylor Guitars has been so amazing to me and my band. They are generous people doing great things. They are like an extended family and I love every visit to the factory and hanging out with the people there. Tim Godwin, the A/R Director is probably one of the nicest men I have ever met.”

The future couldn’t be any brighter for Lovaas, with plans for a debut album and more live dates ahead.

While Lovaas is pleased with accolades and ticket sales, he’s happiest with a more down-to-earth part of a life dedicated to music. “Being able to create something out of nothing and share it with people is the most incredible thing to me,” he said. “Music cures me and music has the ability to cure others.”

FIDDLE CAMP: Fun for All!