November 2022
Vol. 22, No. 2
From Reiki to Rock: Mueller College Launches Recording Arts Program by Paul HormickOctober, 2014
San Diego Is (Almost) Famous Again: Cameron Crowe Brings his Movie to the Old Globe Stage by Raul SandelinOctober, 2014
The End of the Line for Mad, the Magazine That Was Satirical, Silly, and Serious by Paul HomiczOctober, 2014
THE HOSPICE BUBBLE and Other Devastating Affirmations: Poems by Lizzie Wann by Ted BurkeOctober, 2014
You’ll Get Pie in the Sky When You Die by Yale StromOctober, 2014
LENNY BRUCE: Word Blower Supremo (and the brother that you never had) by Jon KanisOctober, 2014
Art on 30th: Creating and Marketing Art You want to Live With by Lorraine IversonOctober, 2014
To Candye–Love, Sue by Sue PalmerOctober, 2014
Nicki Carano: A Tragic End for a Beloved Friend by Liz AbbottOctober, 2014
Movies About Musicians: Real and Imagined by Ted BurkeOctober, 2014
Advertisements 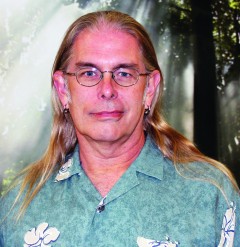 We are standing toward the back of one of Mueller College’s new Recording Arts classrooms. Rows of work stations go from the back to the front of the room, about 15 in all. Each desk has a new computer monitor and keyboard. To the right of each computer is a small electronic keyboard, like what you would see on an electric piano or organ. Welsh indicates to the black and white keys of the instrument as he explains that students, of course, have to meet academic standards, the usual stuff that colleges need, such as a high school diploma or GED, but past that, students in Mueller College’s Recording Arts Program are there to learn everything from the basics on up. “We are not concerned if students have ever used ProTools. We don’t care if a student knows if this is a C,” he says as he motions to the middle white key. “But we do care if our students are passionate for this kind of work.”

Jeff Welsh is the owner, as well as president and CEO, of Mueller College of Holistic Studies. Most folks in the music community know Mueller for their Open Mic Nights and live music on the weekends. Since it’s founding by Bill Mueller back in the mid-seventies, Mueller has been where folks who want to be massage therapists and holistic health practitioners have gone to get their training. In recent years, however, students have been able to pursue other degree programs at Mueller.

Starting in June of this year, Mueller College started teaching students in its fifth program, Recording Arts. The new program’s first enrollment is about 15 students. Welsh envisions that the number of students in the program will max out at 60.

Mueller College is now located in Mission Valley, about a stone’s throw south of the Fashion Valley Shopping Center. The original school was in North Park, and its previous address in University Heights now serves as the Mueller College Wellness Center, where massage therapists and holistic health practitioners can buy oils, massage tables, and other tools of their trade. You can also receive a massage from student therapists at the center. Besides certificates in Holistic Health, the other programs offered at Mueller College include Small Business Operations, designed to train folks who wish to become self-employed entrepreneurs, as well as degrees in Personal Fitness Training and Drug and Alcohol Counseling.

The campus of Mueller College is typical of all the office buildings in Mission Valley, and perhaps all the office buildings everywhere in the universe. There are acoustic tile ceilings, office cubicles, and the ubiquitous water cooler. And yet there is the vibe that lets you know that you’re in an institute devoted to holistic health and healing arts. A poster in the lobby proclaims, “Every day holds the possibility of a miracle.” Close by is a sketch of a man, more or less nude sitting cross-legged yoga style, with a mass of hair rising from his head and filling the frame. A massage magazine rests on a table, a content blurb on the cover says “Software for your Practice.” The TV monitor in the lobby silently scrolls through notifications for students, reminding them of job postings and repeating the mantra of the decade, “Like us on Facebook.” Photos of recent graduating classes, in full cap and gown, fill a section of one wall.

Welsh met Bill Mueller quite a few years ago, and the two quickly became friends. One day over lunch Mueller complained that he was tired of all the administrative work that his position required and that he would be happier just teaching, as he had years before. For Welsh, this was an opportunity that he had been seeking for some time. He had been working in education for a few years and had wanted to get more fully involved. “I was a clinical psychologist for years, and the prospect of getting into education was so exciting for me. As a therapist, I can work with only so many people in a day, five or six. As an educator, that number multiplies. I can help a lot more people,” he says. The two discussed the prospects, went from discussing generalities to specifics, and soon after Welsh bought the school from Mueller.

A lifelong musician, the connection between music and education seems to have been predestined for Welsh. “I was 14 and had been playing guitar for about four years when I went down to the local music store for guitar lessons,” he says. He sat down with the instructor and, when the guitar teacher asked him to play something, he played a tune or two. When he finished his student audition, the instructor politely asked him to wait, then stepped out of the room. When he came back, he had the owner of the music store with him. “And the owner said, ‘Bill tells me that you’re the new guitar teacher.’ I’m sitting there and tell him that no, I just came in for lessons. The owner said, ‘Well, Bill says that this is his last week, and anyway you’re better than him. You’re the new guitar teacher!’” So at the age of 14 Welsh found himself teaching over 40 students a week, his mother driving him to the music store in the evenings after school.

The tie-in between Mueller College and the music world also goes back several years. Back when the college was still in University Heights, there was a little brush up across the street at Twiggs coffeehouse. Concerts had been held in the Green Room, next to the main room of the coffeehouse of Twiggs. Complaints came in from neighbors about the noise, which put the kibosh on the music. When Welsh got wind of what was going on he invited Johnny Ciccolella, who had been booking the shows and running the open mics at Twiggs Green Room, to move operations up half a block and across the street to Mueller College’s facility on Park Boulevard. The concert series, appropriately titled “Across the Street,” successfully continues to this day at the Mueller Center in University Heights.

Despite his career and raising his family, there is almost no time in Welsh’s life that he has not been involved with music. “I’ve always liked the energy of rock,” he says. “And I like the compositional quality of classical music, so what I’ve wound up involved with is prog rock.” His ongoing prog rock project is his band Ninth Choir, which has been said to celebrate the great sounds of the seventies progressive rock movement while incorporating more modern heaviness into their sound.

Dr. Jeff Welsh is a big man, six foot-two or six foot-three. His shoulder length hair has more than a touch of grey. He has sideburns. Not big early seventies Tom Jones sideburns, but small sideburns, neat and trim. He is exceptionally straightforward in a very friendly way.

Welsh emphasizes that students get intensive training and experience in the Recording Arts program. “The students get a two-year program that they can finish in 18 months. As a matter of fact, they receive more hours of training and class time here than they would at a regular two-year program,” he says. Students take courses that are only concerned with their program of study. They study only recording, mixing, and other recording arts techniques. “We don’t teach English or history here,” Welsh says. “If a student wants to take an English class or a history class, the community colleges are available to them.” A student could go to a four-year school and study recording arts for four years, which would include English and all the other electives. Welsh notes that if a student chooses the program at Mueller, he or she would save both time and money.

In other schools students work in mock-ups of recording studios, places created by the schools to resemble actual recording studios but where real commercial recording is not done. At Mueller College all students work at one of the premier recording studios in southern California, Studio West, as part Recording Arts program. They will spend 255 hours setting up microphones and sitting behind a real recording console before they can receive their degrees. The 8,000-square-foot facility of Studio West is used by big-time Hollywood film productions and top-notch recording artists. Soundtracks to The Usual Suspects, Ironman, and other major motion pictures were produced at the Rancho Bernardo-based studio. Joan Osbourne, Ike Turner, Boyz II Men, and Queen Latifa are among the well-known musicians to record there.

Outreaching to bands or musicians that want to get some quality studio time, students will work with a band or musician to make an EP. Since the technicians are students, studio time for the musicians will be free. Degreed students can expect to find work with churches, amusement parks, convention centers, and just about any place that uses sound systems. Among the local businesses that hire a number of sound professionals is Sea World.

“We have 30 teachers in the Recording Arts Program,” says Welsh. “All of them full-time professionals. Students can succeed here.”

James Hood Guitar: repairs, restorations, and excellence under one Roof

Local Musician Translates his Joy of Cooking into a Cookbook