January 2023
Vol. 22, No. 4
33⅓—House of Dreams The Story of Stan Ross, His Recording Studio, and Lots of Hit Records by Paul HomiczAugust 2019
Back with a Bang! Java Joe's Reunion at San Diego Folk Heritage by J.T. MoringAugust 2019
Book Review: The Philosophy of Modern Song by Bob Dylan by Ted BurkeAugust 2019
Rick Nash: Bass Man in Demand by Wayne RikerAugust 2019
Mod Revivalists the Trebels to Reunite for 40th Anniversary Show by Jim TrageserAugust 2019
If Music Be the Food of Love, Play On: Dually Noted Pairs Fine Food and Fine Music by Paul HomiczAugust 2019
Harold in the Land of Jazz by Bart MendozaAugust 2019
Sephardic Dance and Music by Yale StromAugust 2019
Loretta Lynn: A Special Tribute to the Queen of Honky Tonk by Terry Paul RolandAugust 2019
Ben Grace Gilmore: It's All About Building Community by Sandé LollisAugust 2019
Advertisements 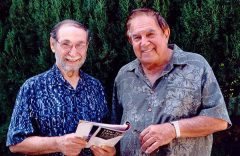 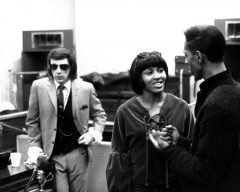 On the corner of Santa Monica Blvd. and Vine St. 50, 60 years ago, a placard shouted MEN’S CLOTHING AT FACTORY PRICES! Inside, while men picked over bargain corduroy and gabardines, little did they know that next door, in an unassuming former storefront, musicians such as Ike and Tina Turner, Sonny and Cher, Bob Dylan, the Ramones, and dozens of others were churning out hit record after hit record. The humble storefront was home to the legendary Gold Star Recording Studio.

Through storytelling and much music, 33⅓–House of Dreams recounts the story of Stan Ross, who cofounded, engineered, and produced the hits of Gold Star Studios. Eddie Cochran recorded “Summertime Blues” at Gold Star. Hugh Masekela’s “Grazing in the Grass” was recorded there. It is where Phil Spector perfected his Wall of Sound for the Ronettes’ “Be My Baby” and the Righteous Brothers’ “You’ve Lost That Loving Feeling.” More than 100 Top 40 hits and other pop music favorites were recorded at Gold Star Studios.

33⅓–House of Dreams receives its world premier at the San Diego Repertory Theatre this month and is the culmination of the partnership between San Diegans Jonathan Rosenberg and Brad Ross. Ross, a dentist, is the son of Stan Ross and undertook the project as a way to remember and honor his father, who passed away in 2011. In putting the show together, the junior Ross participated in many of the interviews with the musicians, producers, and former employees of Gold Star.

A psychologist by training, Rosenberg has also worked as a radio personality and singer/songwriter. In 2014 the New York native turned his attention to the stage. Besides the premier of House of Dreams, the Phoenix Theater in Arizona premiered Americano earlier this year, a musical Rosenberg co-wrote based on the real-life story of a Dreamer son of immigrant parents.

From the very beginning, Ross fostered the innovation of artists. Jimi Hendrix recorded at Gold Star. Punk bands and jazz artists recorded there as well. Iron Butterfly recorded “In-A-Gadda-Da-Vida,” all 17 minutes and five seconds of it, at Gold Star.

Ross cofounded Gold Star with David Gold in 1950, when both were barely out of their teens. Their success was the result of both of their talents. Gold designed the recording equipment and the studio’s famous “echo chambers” that gave Gold Star recordings their big sound. Ross produced and engineered the hit records. While the studio and echo chambers were a big draw for musicians, many sought out the studio because of Ross’s outgoing personality. When “young or inexperienced producers found themselves hopelessly out of their depth,” Ross rescued them, Gold remembered when Ross passed away.

In a shared statement by Rosenberg and Brad Ross, the co-creators said of Stan Ross, “He was the personality, lead engineer, and mentor at Gold Star. His creative pioneering, along with his partner’s technical knowledge and studio design, led them to develop Phil Spector’s famous Wall of Sound productions. Stan’s story is our story, and is still relevant today.”

By 1984, 33⅓ years after its founding, Gold Star shuttered its doors, owing in large part to the proliferation of advanced and affordable recording technologies. “It became a button business rather than creative business,” said Stan Ross in July of 1988, as he explained Gold Star’s closure to William K. Knoedelseder Jr. of the Los Angeles Times. “It got to the point where we were putting all the money we made back into new gear. It became ulcer time, and we weren’t having fun doing it anymore.” Less than a year after the closure, the studio burned down. Now, at the location, there stands a strip mall where you can visit a smoke shop and get a Beto O’Rourke-O’latte at a Starbucks.

Though Gold Star Studios are no longer, San Diegans may be interested to know that in 1974 Gold and Ross were hired to recreate a version of Gold Star, sans famed Echo Chamber, in Santee, for what has become Twinstar Recording Studio.

Playing the role of Stan Ross in House of Dreams is Nicholas Mongiardo-Cooper, whom fans might know from his appearances on the TV shows Casual and Fuller House. In the role of David Gold is Jacob Caltrider, an actor, singer, and dancer who has been closely associated with San Diego’s Cygnet Theatre.

House of Dreams is a cooperative effort of the San Diego Rep and the San Diego School of Creative and Performing Arts. Some of the actors and musicians are local students from the SDSCPA’s Xchange Xperience program. This gives the students a chance to participate in an actual theatre production. SDSCPA and the Rep have cooperated on productions since 2010, producing such hits as Hairspray, The Who’s Tommy, and Evita.

33⅓–House of Dreams runs from August1–31 at the San Diego Repertory Theatre, Lyceum Theatre, Horton Plaza. Go to sdrep.org for more information and to purchase tickets.