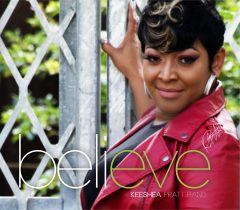 Out of Houston, but gigging a lot locally lately (before the quarantine), the Keeshea Pratt Band is the genuine article for blues lovers. Despite the direction of the industry, there are those who still honor R&B and blues traditions that arose in clubs in the gritty blue-collar river towns in the heartland, and the KPB’s Believe is a vibrant and exciting example. No surprise that the seven-piece outfit won first place in the 2018 International Blues Challenge in Memphis.

The band is a throwback to the kind of crews that put together the Stax/Memphis sound a few decades ago, with a full horn section blasting sharp charts and blazing solos. Road-tested grooves are laid down by journeyman bass players and drum pros, including musical director Shawn Allen, on bass throughout and writer of the dozen songs here. Also on board for the 12 tracks are a squad of background vocalists that inject soul/gospel fervor into many of the tracks in addition to stellar guitar playing from Brian Sowell; but the star of the show on the strong set is Pratt and her pipes, which recall a bluesy blend of Patti LaBelle and Anita Baker.

“Make It Good” opens and presents the strengths of the combo: ensemble playing and crisp horn fills as Pratt and her backing singers promise to make a lover never regret choosing her. More blues power is on display in “Have a Good Time Y’all,” which takes a roadhouse blues-rock route with Pratt definitely in the driver’s seat, “When I’m feeling down and need to pick myself up/ I come down to hear this place where I shake my butt.” Her vocal power, sass, and range are all there, and she can push just the needed buttons on each tune, as she does on the slower highlight “I’m in the Mood,” a tune that pulls no punches, achieving a female-oriented BB King ballad feel, helped along with some great guitar work from Sowell—and a song worth getting the disc for by itself.

The Crescent City gets a nod in “Shake Off These Blues,” a celebratory boogie about partying à la New Orleans, and “Home to Mississippi” strips out the horns for bottleneck guitar and adds harp as Pratt, a Mississippi native, sounds at home singing about being born in Jackson. Back to full band for “Monkey See, Monkey Do” as she reads the riot act to a wayward man, “I can smell the cheap perfume…While you were out with Jane, I was swinging with Tarzan/ When you spend time with Jill/ I go and hang with Bill.” It plays on all the blues themes with surprising power, the horns adding punctuation to layered organ hooks, and again with tasty guitar decorations. The title track is another winner, with a punchy beat that finds Pratt delivering an anthemic purpose statement about living up to her dreams, and like the other songs here, she sings the hell out of it. This superb, must-have blues collection even includes a live eight-minute track, “So Sad Blues,” that wraps the killer set.